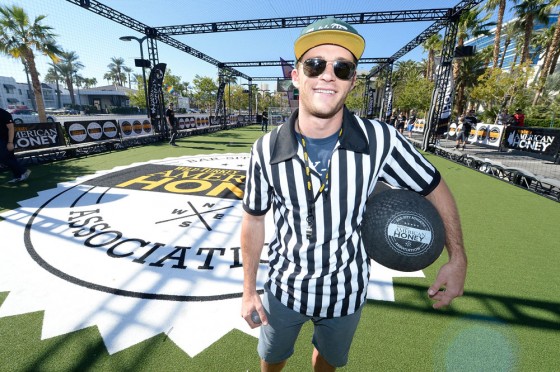 If you follow us on Facebook, Twitter, or Instagram (why wouldn’t you?), you likely saw us having a great time in Las Vegas over the weekend. We were in town for the American Honey Bar-Sity World Championships, and it was a truly amazing weekend. The good folks at Wild Turkey invited 160 competitors to the Hard Rock Hotel for an epic kickball tournament, and awarded the winner $10,000. That was the main event, but there was plenty of other fun to be had.

Before we even got to the competition, they hosted everyone for an awesome kick-off party the night before, which featured all the ping-pong, pool, darts, and corn-hole action you could stand. Of course there was free flowing American Honey on hand as well, including The Honey Gobbler signature cocktail created by actor Scott Eastwood.

Scott was invited to serve as the Celebrity Referee for the weekend, a role he took seriously with his striped shirt, whistle, and bare feet. The kickball tournament began at 10 AM sharp, and if any competitors had difficulty waking up after a long night in Vegas, they would be disqualified. That wasn’t a problem though, as the bar dwellers came to play. Sixteen teams from around the country were placed into a bracket, and the last one standing would receive the grand prize, and title of World Champion. The field was long and skinny, but the action was fast and fierce. Check out the highlights (including a little surprise) in this sweet video :

The surprise we mentioned was that crazy Bubble Soccer game, apparently the first to be held in Las Vegas. As lunch time entertainment for the competitors, media folks (like us) and the American Honeys teamed up for a hilarious match of Bubble Soccer, which sadly saw us losing, but having a great time just the same. Amazingly, none of us were seriously injured in the making of that video.

In the afternoon the kick-ball action heated up, with Boston, Chicago, Louisville and New Jersey advancing to the final four. The teams competed into the evening, until finally Chicago was left standing after knocking off Louisville under the lights. The teams shared a shot of American Honey together on the field before Chicago was awarded their trophy and comically over-sized check. Sadly the Hard Rock wouldn’t let them bet it all on Black.

At the end of the day, it doesn’t matter who won, it’s all about the after party…