Wednesday night should have been a banner night for hockey. A grand goodbye to one of the greatest playoff years of all-time. A night where regardless of who won, people would have remarked about a game 7 for the Stanley Cup, or all the great series’ that lead up to this point, and the amazing amount of overtime games that we were treated to on an almost nightly basis. 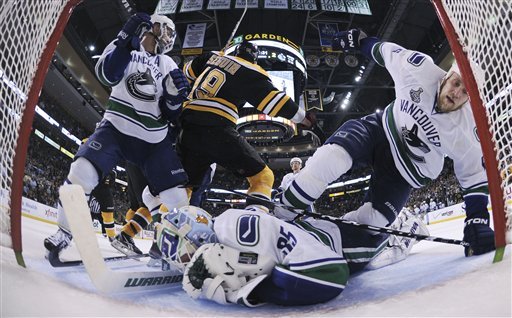 When we should have been talking about what the Canucks did wrong in this series, or the amazing play of Conn Smythe winner Tim Thomas, we were left with the images of maniacs running amok in downtown Vancouver, throwing things at cops, destroying and looting businesses, and flipping over innocent peoples cars. Rather than the memorable image of the Boston Bruins gathered around the Stanley Cup on the ice, we will remember an idiot dancing on top of a flaming BMW. 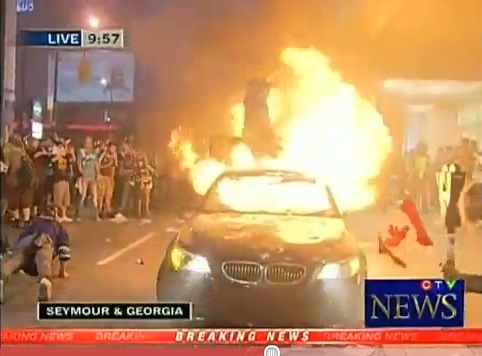 But before all this, oh what a treat these playoffs were. Up to this point in my life, I cannot remember a more exciting playoff season ever. The opening round had half of the 8 series go the full 7 games. Including the dramatic comeback attempt by the then defending champion Chicago Blackhawks. They battled from 3-0 down, to force a game 7 against the Vancouver Canucks. As if that drama wasn’t enough, that game 7 went to overtime, where the Canucks eventually won. After that game, I told people that may have been the best series of hockey I had ever seen. And that was in the opening round.

The Bruins went through the same type of drama, while not having to deal with a 3-0 deficit, they too were pushed to the brink in the opening round against their most hated playoff rivals the Montreal Canadians, with a game 7 on home ice that again went to overtime. Again, all of this in the opening round, with 3 more rounds of drama yet to unfold.

But sadly, the casual hockey fan will not remember these playoffs for that, or any of the subsequent action or news that came as these playoffs progressed. Instead people will look back on the 2011 playoffs and remember it as the year the city of Vancouver rioted long into the night, destroying things just because they had an excuse to.

And while this Stanley Cup Final may not have been the greatest series ever played, it was loaded with compelling storylines from start to finish. On one hand you have Vancouver trying to win the first championship in franchise history, while Boston was looking for its first Cup since 1972. People hyped it up as USA vs Canada all over again. The matchup of two goalies who appeared to be at the top of their games coming in, which was weird in itself based on recent Finals. Prior to this year, when was the last time two top flight, big name goalies made it to the Stanley Cup to face off against each other? Then to add to that drama, you had Roberto Luongo taking shots at his counterpart Tim Thomas halfway through the series.

From a statistics standpoint, this was one of the oddest Stanley Cup Finals I have ever seen. To start, over the course of 7 games, the Canucks scored 8 totals goals, which speaks to the amazing play of Tim Thomas. But to only score 8 goals in a series makes it all the more amazing that this series went the full 7 games. Realistically based on the goal differential in this series (23-8 Boston) Vancouver’s odds of being swept were far greater than their chances of winning 3 games in this series.

In my mind the most memorable thing about this series was the remarkable play of Tim Thomas, the hands down winner of the Conn Smythe Trophy. As mentioned earlier, he was able to hold the Canucks, the highest scoring team in the league in the regular season, to 8 goals over the course of 7 games. Or in a stats perspective, a 1.15 goals-against average and a .967 save percentage. In addition to that, Thomas also set playoff records for the most saves in the Stanley Cup Finals, most saves in the playoffs, and became the oldest winner of the Conn Smythe at age 37. 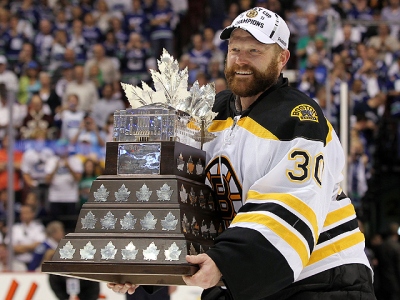 In sports they often talk a bout placing mythical asterisks next to certain seasons. Be it Roger Maris needed a few more games than Babe Ruth to break his home run record, or Barry Bonds for his steroid allegations. And unfortunately I think that’s the way that people will look at this series. Yes the Boston Bruins played remarkable hockey, and were very deserving champions, but on equal footing, and recognition will be the riots that happened after the game.

Yes people will always remember the Bruins as champions, but the embarrassment that happened in the streets of Vancouver will always be mentioned alongside it.

The riots may have been about hockey at first, with fans upset their team was unable to clinch with a 3-2 lead in the series. The usual things that happen in these situations did, people fighting each other in the streets, and a car or two turned over. That could have been it, a few idiots who caused some havoc, and we all move on. But from there it was not about simply losing a hockey game, because at the end of the day that’s all it truly is, is a game.

These scenes that were coming out of downtown Vancouver reminded me, at least from a viewing standpoint, of staying up late into the night and watching the devastation that was going on in Japan when tragedy struck there. It was a frightening scene that I could not look away from. For more than 3 hours I sat watching new footage come rolling in, and live shots of police firing flash bombs into crowds, and crowds storming into stores. 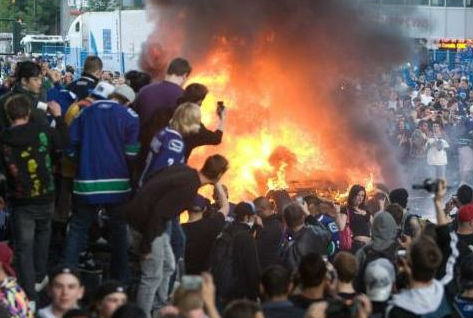 The most memorable performance of the night, outside of the hockey rink, had to go to CTV reporter Rob Brown, who was front and center in all the destruction and chaos that was going on. Yet he kept pressing forward, getting interviews with pedestrians, and dealing with people who only saw him as their chance to get on TV.

Truthfully, I don’t think the majority of the damage was even done by Canucks fans. It just happened to be Canuck fans who got the ball rolling. Much like Vancouver mayor Gregor Robertson was saying, I think it was just a small group of morons, who knew that some sort of violence was likely to happen no matter the results of the game, and decided it was the perfect excuse to cause mayhem. They probably were not hockey fans, just people who were out looking for destruction. I think it’s unfair to blame everyone in Vancouver for the actions of a few idiots.

It’s unfortunate that the night that every hockey fan dreams of, game 7, a Stanley Cup Champion crowned, montages from CBC and NBC featuring all of the great game 7 moments from the year, the great goals, great saves; the amazing play of Tim Thomas, and the ultimate moment where Zdeno Chara received the Stanley Cup, finally hoisting it over his head. 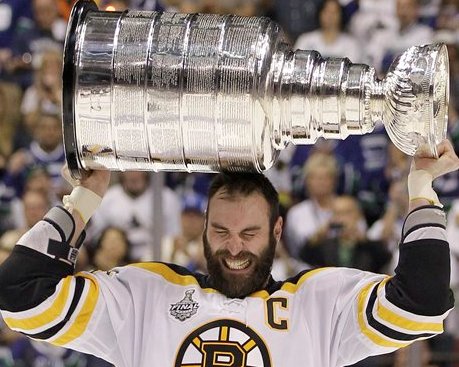 It will always be shared both on TV and in memory, with the flames that were in the streets of Vancouver, and the smoke that rose up above the skyline, literally putting a black cloud over what had been one of the greatest season’s of playoff hockey ever.