An Homage to ‘Dinosaurs Attack!’ 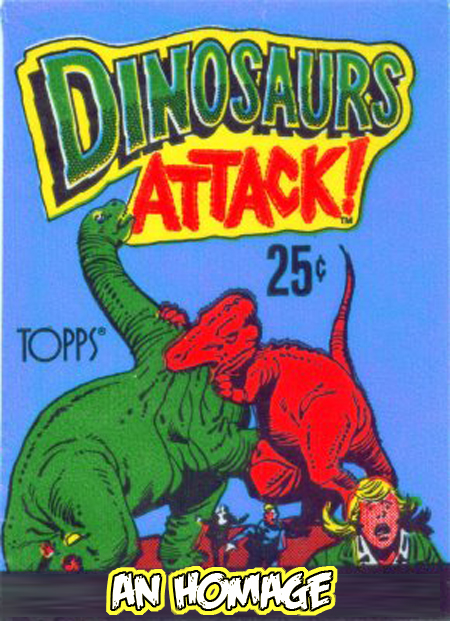 The year was 1988. Topps card company had a stranglehold on the collector’s market. They released baseball cards, football cards, and, of course, Garbage Pail Kids as well as tons of cards to accompany just about every major movie franchise released in the 80’s. But it was their big hit -Mars Attacks!- a card set from the 60’s, that they went after next. The plan was to create a follow-up to their successful set, only this time replacing aliens and their Earth-destroying ways with Dinosaurs. The story followed scientists and their misguided attempts to bring dinosaurs back through time into the modern world in far sillier ways than even Jurassic Park tackled. Obviously, nothing good came of this and soon thousands of rampaging prehistoric beasts were wreaking havoc all over the place. The cards were gruesome, violent, and absolutely kick ass. The artwork was amazing and featured highly detailed images of gore and epic brutality. What? You don’t remember this set? Yeah, well, it didn’t quite strike the chord Topps had hoped it would. But fear not, you can head to many places on the web to check out the complete 55-card set, including HERE. I, however, have singled out the twelve most vicious and disturbing cards in the set. Trust me, the other 43 are just as cool, but these just happen to be the most over the top… in my opinion. So, what are you waiting for… check ’em out! 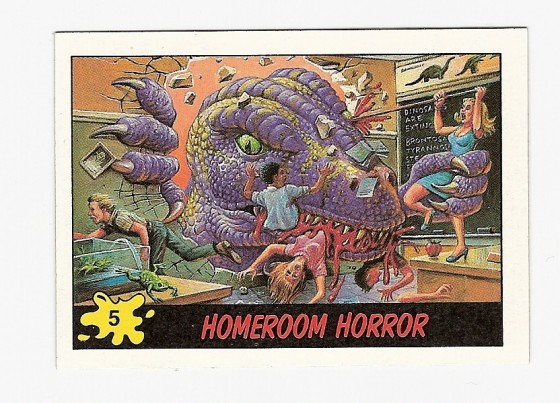 Yes, this is the classic visage of a monster rampaging through a classroom. Is it worth a few student’s lives – students who are no doubt cheering the dinosaur on – to make the teacher suffer? Whether it is or not is a moot point because the monster is pretty much going to destroy everyone. 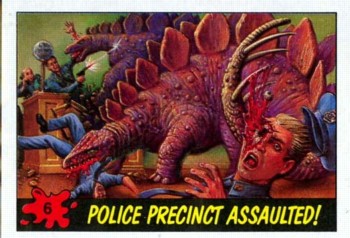 Ah the useless police force getting their comeuppance… is there a prettier picture? Well, probably. As you can see here, one of the cops is getting his face caved in by the dinosaur and it even shows his eye ball cruising over his head! Awesome. 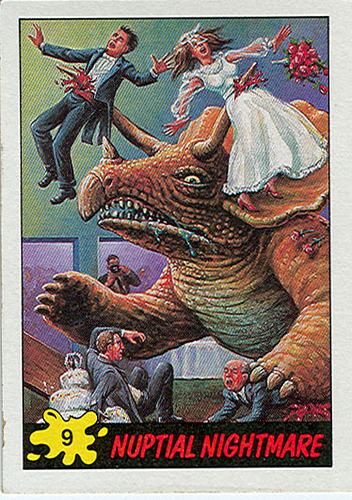 I can just hear the bride now, as she struggles to scream through the bubbles of blood welling up into her mouth, “My mom paid a fortune for this dress!” And somehow I can feel a little for the groom knowing, deep down somewhere near the horn protruding from his gut, that this was the best possible luck to save him from years of marital slavery.

Look, no one ever accused Topps of being anatomical geniuses or getting the sizes of dinosaurs correct (we all know now that duckbills were never this big), but how cool is it to see supposed plant-eaters peeling open a school bus and just chewing through the contents like a Twinkie? Very, very cool. 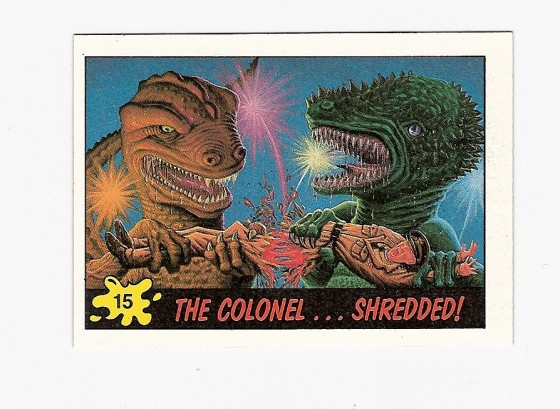 It almost looks as if these two dinosaurs are arguing over which one gets to consume the military commander first like a couple of children fighting over the last Twizzler. The look on the guy’s face is priceless and very reminiscent of a zombie flick where the victim gets to spit one final, dying word. This one? “Share!” 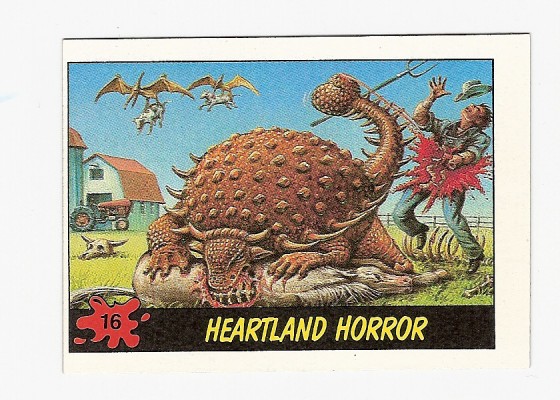 The most gruesome part of this visage isn’t the fact that, yet again, a plant-eating Ankylosaurus is consuming a whole cow, it’s the simple fact that he’s trying to keep any and all away from his meal by bashing all comers with his enormous hammer-tail. The added touch of the farmer’s guts spilling out is sheer icing.

All that needs to be said here are four simple words: This guy is fucked. 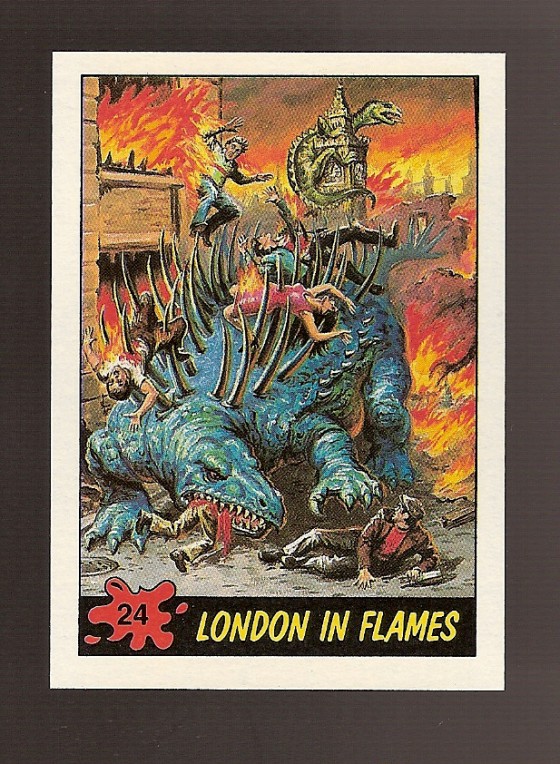 Well this is simply adding insult to injury. First of all, you wake up to the news that dinosaurs are brutally laying waste to your city, and then you smell smoke from the inferno tearing through your home. So, you attempt to jump out the window to save yourself… oops. 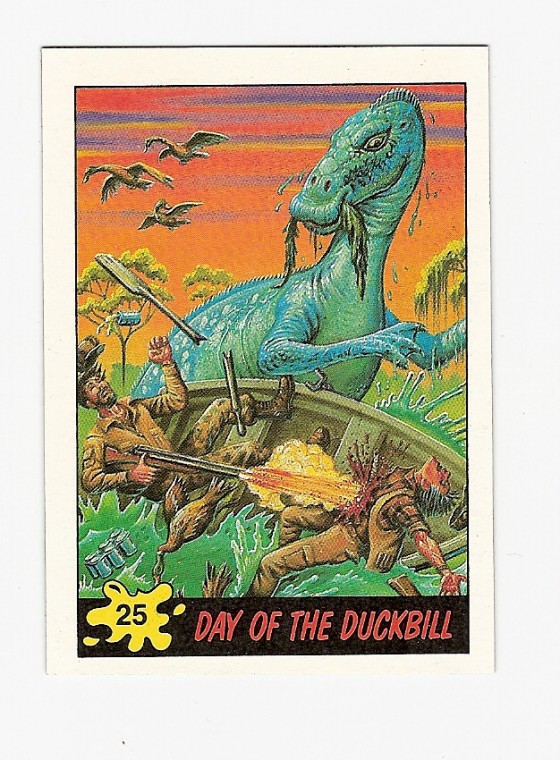 If the duckbill here had been doing the exact same thing in its own time, there would have been nothing overly unusual about this scene. But, the simple fact that it’s happening now, in a modern lake, well… that’s grounds for a shotgun blast to the guts, my friend. 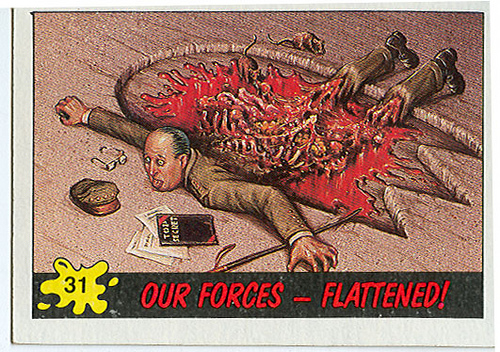 This might be one of my favorite cards of the whole set. It’s such a perfectly depicted moment. Poor Commander was just in the wrong place at way the wrong time. The exposed skeleton is beautiful. 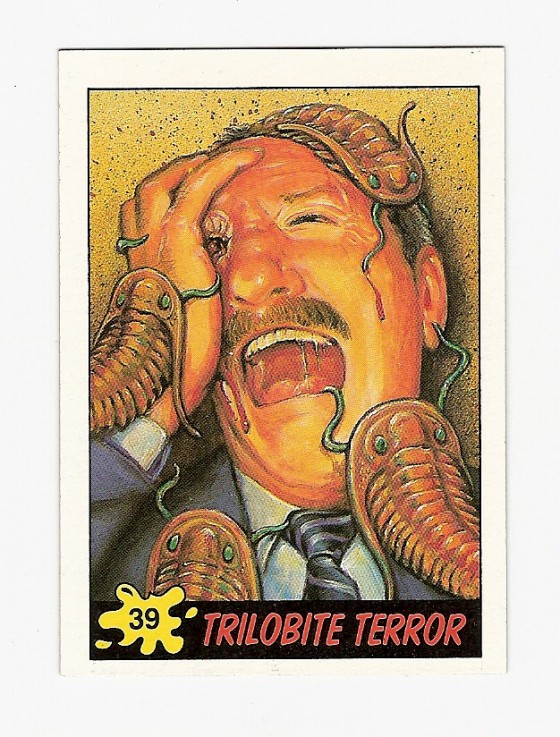 The best thing about this card is the sheer perfection of it. The guy’s cries of terrifying agony come across as almost visceral and Trilobites were, roughly, that size so one could, conceivably, picture this actually happening. Gives ya shivers, right? 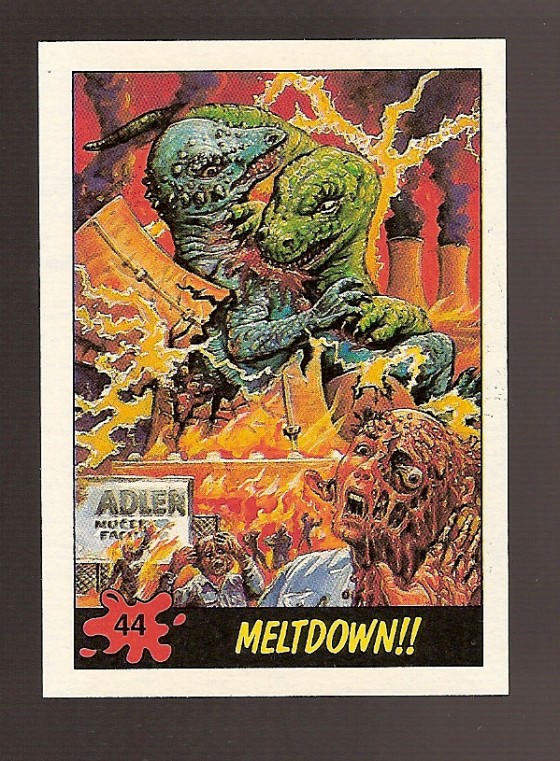 Hey look out! There are two giant dinosaurs fighting behind you! Oh, wait. You can’t. Your face is melting off your skull and you’re covered in acid and fire… sorry.