Media > Movies > An Interview with the Coen Brothers

An Interview with the Coen Brothers 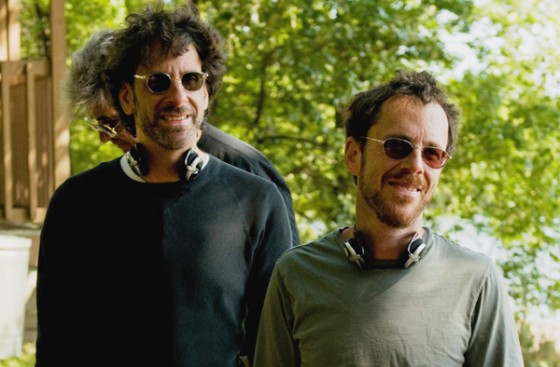 Recently, Gunaxin ventured to London to interview the Coen Brother’s about their latest movie, A Serious Man, their working hours, future projects and marijuana. 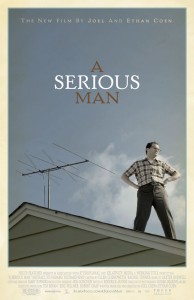 A Serious Man sees the Brothers taking a step back from last year’s Oscar grabber, No Country For Old Men. In the film, a humble professor by the name of Larry Gopnik is simply trying to stop his life unraveling from beneath him, as he had to deal with a constant barrage at home and at work. The film stars Michael Stuhlbarg as Larry Gopnik, Richard Kind as Uncle Arthur and Fred Melamed (in a very comic turn) as Sy Ableman.

To meet them, we headed to the prestigious 5-star hotel, Claridge’s, where the 4-time Oscar winning pair was holed up. The entrance was typically grand in stature, with hotel concierges pacing with perfect posture as they ferry suitcases from one room to another.  After checking in, we were led across the huge marble foyer and up a wide staircase to a conference room. Not being a bunch to turn down free food, we saw our way through a couple of silver platters that were stocked up with perfectly cut rectangle sandwiches before being ushered into an adjoining room. It was there that we sat down around a table and anxiously awaited the Coen Brother’s entrance.

GUNAXIN: There has been a lot of talk about this film being a lot more autobiographical for you guys, would you agree?
JOEL: It’s a bit of both really; I mean the story is made up so…we wanted it to reflect the community we grew up in. I mean where Larry lives is very much the style of our neighborhood, our parents were academics, as is Larry in the film.
ETHAN: We didn’t have an uncle who stayed with us though, but we knew of one, as well as there being someone who wrote a book they called, “The Mentaculus” (a book the Uncle is writing in the film).

GUNAXIN: Is your relationship similar?
JOEL: What with Larry and the Uncle?
GUNAXIN: Yes!
JOEL: Shit. I hope not.

GUNAXIN: Do the characters reflect you guys? Specifically Larry? And Jewish boys seem to smoke a lot of pot, is this personal experience?
ETHAN: Larry doesn’t reflect us, he is of our curiosity as we wanted to look at how a scientist, full of rationality seeks help with spiritual leaders. I mean mathematics and spiritual Judaism share a lot in common with numbers. As far as the pot smoking goes we used to smoke plenty of pot just not at the age Danny was when he smokes in the film.
JOEL: I certainly have never smoked pot at a Bar Mitzvah like Danny. Sorry, go on.

GUNAXIN: Would you consider yourself maturing as filmmakers now?
ETHAN: I don’t think we’ve ever considered ourselves mature, I was under the impression most of the stuff we did was juvenile. We don’t necessarily ever sit in a genre; it’s kind of an unexamined question with us.

GUNAXIN: How did your working relationship occur and what kind of work ethic did you set yourselves? With your first film Blood Simple. you managed to write and direct it yourself, a kind of freedom not many get anymore. I mean with Blood Simple. were you locked away in a room typing furiously?
JOEL: I would certainly say we have become more professionalized in our approach. With Blood Simple. we were in our mid-twenties and I can’t remember…I think we were staying together in some kind of apartment or complex or whatever. We certainly worked a lot more back then. Our relationship has changed because now we have wives and kids and have to go to an office to begin work.

GUNAXIN: Well in regards of hours specifically, you have a huge amount of upcoming projects and past credits; did you used to hammer out 3,000 words a day?
JOEL: Shit no. I mean we often get told we work a lot, but to us, we are incredibly lazy. I mean we never really feel like we are doing much. What is everyone else doing? You know? But referring back to Blood Simple. we used to do 6-day weeks for sure. 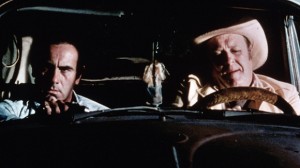 "Blood Simple." was the Coen Brother's directorial and writing debut

GUNAXIN: What was the idea behind casting a relative unknown lead actor and subsequently a lot of the cast?
ETHAN: Well we wanted to present this world that looked kind of exotic to others, I mean to us its home, but to others we wanted to present another worldly feel. Having an unknown actor allowed us to give this slice of life feeling and immerse the audience in the setting, I mean if you watched it and George Clooney kept popping up you would lose that immersion.

GUNAXIN: Larry in the film pretty much has a mid-life crisis, is this perhaps you guys looking ahead to years to come?
JOEL: Yeah. No. Yeah. Well…put it this way we could not have written this when we were like…30.

GUNAXIN: A Serious Man, the title, similar to No Country For Old Men seems rather frivolous? As in sometimes things are random.
JOEL: Well the title, A Serious Man is quite ambiguous with us actually. But it’s meant to play on Sy Ableman being that man who is far more taking of life and it’s what Larry eventually tries to become. As far as No Country For Old Men goes, yeah I would agree with you that’s pretty much what it’s about.

GUNAXIN: Could you tell us anything about your upcoming project?
JOEL: Sure. Our next thing is remake of a film that starred John Wayne in the late 60s called True Grit; we both really liked the novel. It’s a Western. It’s going to have Jeff Bridges, Josh Brolin and Matt Damon in it. We still haven’t cast the lead which is a 14 year old girl though. 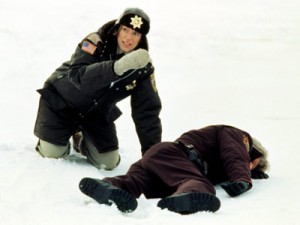 Joel Coen's wife, Frances McDormand won the Oscar for her role in the black-comedy, "Fargo"

GUNAXIN: Do you have any advice for budding filmmakers?
JOEL: Wow, broad question. I mean I’m not even sure if we can comment on this, not sure we have the relevant experience anymore, and it’s a completely different environment.
ETHAN: Yeah, I often find it difficult to give a prescription on what to do, I mean most of the people that I know who are involved in the film industry, which is pretty much everyone I know, has all gotten into it in various ways, kind of stumbled in.
JOEL: One thing I would say is it is always better to generate your own material, it gives you so much more freedom and control to do what you want.

GUNAXIN: Do you consider yourselves artists?
JOEL: Well I certainly would not put artist on my passport, you know. Again never really considered it, we don’t see ourselves as having scientific expertise or anything.

A Serious Man has already enjoyed a positive, yet, limited release in the U.S. It is currently opening across Europe.