An Ode To Ollie Williams 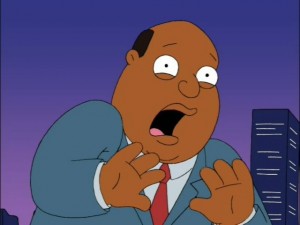 Ahh, Ollie Williams.  If you are unaware of this genius character from the series Family Guy then you are surely missing out.   Family Guy has given us many great characters over its nine season run.  Tom Tucker, Adam West (fictional version), Bruce, and others have shown the underrated nature of certain characters on the show.  But Ollie is basically the Rodney Dangerfield of the series.

So who is Ollie Williams?  In terms of development, his character is absolutely brilliant.  Delightfully racist, in your face, and stereotypical, Ollie is everything Al Roker isn’t.  Al Roker is your friendly jolly weatherman who always carries a smile on his face and sunny disposition.  He is also a well-spoken individual, providing more than just the weather.

Ollie Williams, obviously, is a satirical take on the persona of Al Roker.  He is the polar opposite, usually playing delightfully off of the deadpan and sadistic Tom Tucker.  His famed “Black-U-Weather” Forecast is pure genius from creator Seth McFarlane and company.  He has always been a personal favorite and as the seasons and show progressed, he came became a little more versatile.

This article is meant to honor the greatest black weatherman of all time, the great Ollie Williams.  His tremendous one liners are an inspiration for any budding meteorologist out there.  You can’t tell me you wouldn’t want watch the news more if you had an overweight, obnoxious guy dropping the type of one liners Ollie drops on a nightly basis.

Let’s take a look at what makes the blunt, straightforward Ollie Williams one of television’s most beloved and revered characters.

How else would you respond to a storm?

And the Best of…