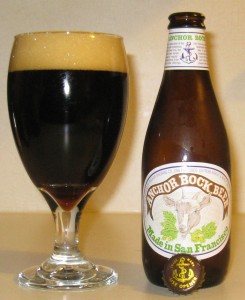 Information: From the Site – “Anchor Bock Beer, released in celebration of the coming of spring, is an ancient and mysterious part of the brewing tradition. Over time, the term “bock” has come to mean a beer darker and stronger than the brewery’s “regular” brew. We hope you will find Anchor Bock to be a rich and flavorful addition to our other offerings. San Francisco’s Anchor Bock Beer is virtually handmade by the brewers of Anchor Steam® Beer, in one of the most traditional small breweries in the world. It is brewed from a complex blend of the finest barley malts, wheat malts, and fresh, whole hops.”

If there’s one thing about the Anchor Brewing Company that you can count on like death and taxes, it’s that they make amazing beers. So, to that end, as I was perusing the very shelves of the shop at which I work (shot out to the Portage City Wine Cellar), it occurred to me that I have not done a bock-style beer! Travesty! A travesty that will be remedied right now.

So what exactly is a bock, you might be asking? Well, I’ll tell you: “Bock is a type of strong lager beer, first brewed in the 14th century in the Hanseatic town of Einbeck, Germany, from which it gets its name (originally “Einbeck” / “Einbock”). The original Bocks were dark beers, brewed from high-colored malts. Modern Bocks can be dark, amber, red or pale in color. Its alcohol content ranges from 6.3% to 7.2% by volume. The beer has a complex malty flavor dominated by the richness of Munich and Vienna malts, which contribute toasty flavors. It has a low hop bitterness, usually enough to not overwhelm the malt flavors, allowing a slight sweetness to linger into the finish. Bock is light copper to brown in color with reddish highlights, with good clarity despite the dark color. It has a large, creamy, persistent off-white head, and moderate to moderately low carbonation.” And thanks to Wikipedia, now you know.

The aroma is immediately nutty and quite malty. It has sweet overtones very similar to hazelnuts, and a lovely deep brown color with a rich, thickly creamy head. It is just as just as dark as a porter and has a very similar appearance and scent to Sam Adams Black Lager, which comes as no surprise. The taste is creamy, rich, malty and fully nutty with a taste as wonderful as the aroma. The more deeply you explore, the more complex flavors surface: chocolates, espressos, caramels, and toasted barleys arrive in a pecking order that lets you sample each unique bit one step at a time. This is something very special indeed. Matching this one with a food is pretty trying since it has so many different hidden flavors, but, for a meal, I would go with a traditional lamb shank and toss in some salty, roasted potatoes and a hearty green and you could do little better.