Humor > Lists > Ancient Mysteries Presents: How to be Funny

Ancient Mysteries Presents: How to be Funny 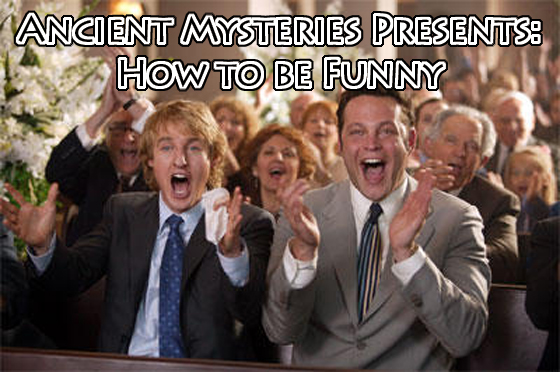 It’s been said that their are only two true human reactions to a given situation: laughter (humor) and fear (fight-or-flight). Don’t believe me? Sit down and watch ‘IT‘. In the dark. By yourself. Sure it’s not necessarily the greatest movie ever made, but it is most definitely the best movie ever made featuring Tim Curry as the scariest clown ever. The movie makes you giggle just a little at just how jovial and goofy Pennywise is -almost lulling you into that false sense of security- and just as suddenly yanks the proverbial carpet out from under your emotions by doing something so incredibly freaky as to make you wish you’d cowered behind the couch like the pussy you claim you aren’t. There’s those two reactions I just mentioned at their very basic core. See, I told you so.

But today were only interested in one half of that duality. The part we know as humor; the part that makes us laugh so uncontrollably that we’re pretty sure we’re going to vomit. We all know funny when we see or hear it: racist jokes, trumpeting farts in mixed company, watching someone getting pegged in the nuts with a rake, politicians who inherently lie through their teeth… and several thousand more ways I’m sure. But even though we all like to think we know what funny is, do we really know how to share the wealth, as it were? Do we really understand just what it takes to return the favor and make someone else laugh like a committed lunatic? Well, we sure like to think we do, but most of us have no idea.

The ‘It Really Happened… Mostly’ Story

When the person commanding the situation (be it in writing or the guy in the ‘Bird Shit’ T-Shirt holding glass of Pabst) begins his or her next diatribe with the words, “So guess what happened to me the other day” -or some similar opening- be wary, for these kinds of stories can derail from a light, jocular monologue about a trip to the pet store to peeing on a man in he park in no time at all. So don’t go into this story all prepared for a wink and a nod at a mildly hilarious situation, because the chances are pretty good that, if the desired reaction isn’t received immediately, the embellishments will soon flow from the orator like a broken flood gate. Furthermore, unless this professional douchebag is an actual stand-up comedian, there is never going to be enough coincidental humor to warrant the audience’s build up, especially yours. So do what I do in a situation like this: take over! That’s right, pretend you were there, slowly inch the idiot floundering around out of the way, and command that situation as though you were trying to right the Edmund Fitzgerald. You’ll earn respect, look cool, and prove to the masses that you are far funnier that anyone else. Just make sure to add poop to the story. Poop is always funny. 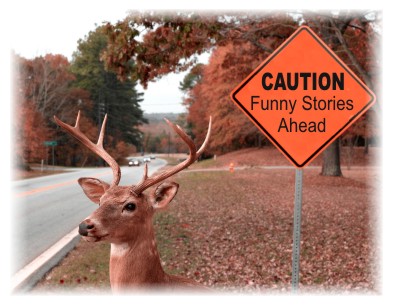 Being absurd is, sadly, a talent that typically fades with age. When we’re kids, sticking the head of a LEGO guy up the butt of one of our sister’s baby dolls is definitely ridiculous, and very funny. But it also serves a purpose: maybe our story includes a giant baby who kills guys with its big butt? Maybe the LEGO guy has super strength and was trying to lift the huge infant when he suddenly slipped right up its ass. Either way it’s absurd. But the weird thing is, as we grow and develop our writing skills (thanks in part to teachers more overtly humorless than a brick wall) we are told that absurdity will not do. Well I’m here to tell you that a little dash of absurdity will always do. If you’re writing a movie review -something I’ve done hundreds of times- the point is to remain on course and just cover the points of the film without doing too much to ruin it. I say fuck that! Right your review about a dream you had once where millions of pickles were chasing you as you ran naked through the streets of Las Vegas armed with only a tooth brush and a tap shoe. Write that review like you just saw the greatest film ever made about egg salad. No one’s gonna notice till it’s too late anyway, and once again, absurdity reigns supreme. 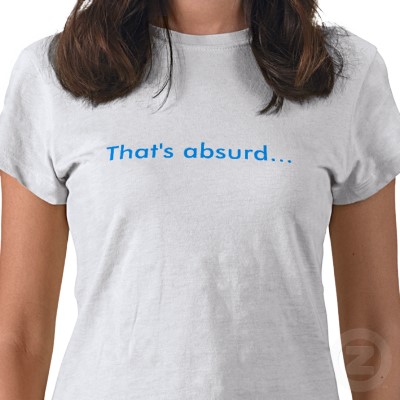 Did You Ever Notice…

This is referred to as observational humor and folks like Jerry Seinfeld were masters of it. I’m not, for one second, going to admit that Seinfeld was or is the funniest O.H. comedian… in fact, outside of his show, he was pretty lame. But without his style and delivery, this way of making people laugh might not have become as popular as it did. Luckily for all of us, O.H. is really, really easy to do, but equally as simple to fuck up. Just pointing out the fact that a Yield sign is super yellow isn’t enough. Pointing out that Yield signs are so fluorescently yellow that they actually blind you before you have a chance to actually use caution thereby becoming the biggest cause of unnecessary traffic accidents ever is definitely funnier and more people can relate to your blatant over exaggeration. Asking a crowd, “What’s the deal with Lindsay Lohan, anyway?” isn’t nearly as funny as asking, “So, Lindsay Lohan looks like the accidents caused by gawking at a train wreck, am I right?” I far better. Observe your surroundings, but just make sure you ice that cake with just enough sarcasm and ridicule to really drive the point home. 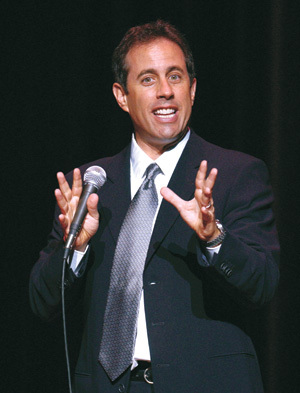 There is such a thing as the verbal bully, and the person who can master that power is king. Take for example the scene in Monty Python and the Holy Grail where King Arthur and his band arrive at the wall of the French castle. This is such a one-sided back-and-forth that you almost feel bad for Arthur. John Cleese as the irate and snooty Frenchman slings epithets and abuse like a gunfighter and doesn’t relent for anything. This, if you are to master the ability of the Rapier Wit, is how you have to be: fast and furious. In fact, the best approach is to catch your would-be attacker off guard and just start hammering the insults and hurtful words before your target even has time to react. And as much as you might feel the need to pelt him or her with a barrage of F-Bombs and combo curse words, these are the weapons of the stupid and uneducated. If you have a powerful enough vocabulary and encyclopedic knowledge of oration, there’s very little need to sink to swearing like a drunken Irishman. Sorry, sorry… I meant a drunken Mick. If you’re smart enough, quick on your feet, and can turn your attacker’s words against them, you will be like Rabbit in a rap-battle. Dog. 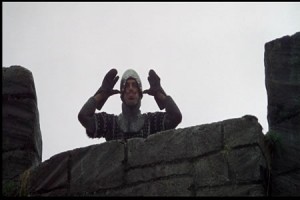 If All Else Fails, Go Full Retard

When a cornered animal has given up on all hopes of escape, sometimes it finds it best to feign death. Similarly, if you find yourself on the verge of losing your audience and all your attempts at lightening up the situation with all of the other humor steps have epically failed, you have but one course of action before you toss in the towel and give up completely. It’s time for you to turn into a complete moron. Start emulating and aping someone from the crowd, preferably one who has taken jabs at you. But rather than just become a myna, turn it against them by mocking them and force the center of attention on them. If the dude’s voice sounds a little nasal, turn that shit up to eleven and make it sound like you’re breathing through an iron lung. If that chick has breath that could stop time, start breathing like Darth Vader and comment on how it smells like a truck stop bathroom in there. If that dude is excessively fat, puff out your cheeks and walk around like a Macy’s Thanksgiving Day Parade balloon. The sky’s the limit. Sure, you might not win favor from everyone, but you’re still bound to make friends with a few of them. Hey, it all comes around to fight or flight. Give ’em what they all secretly want. 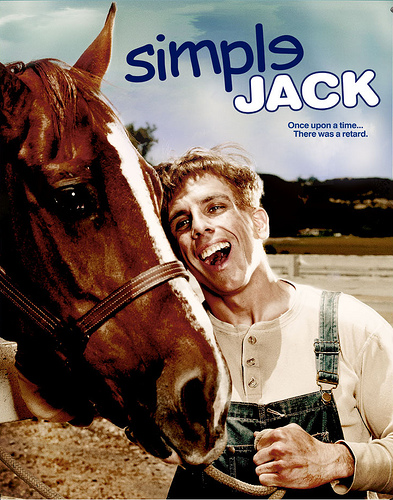