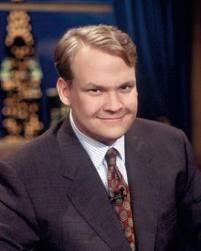 Conan O’Brien just doesn’t get it. The reason why no one watched the Tonight Show was because Andy Richter was on it. Richter is the whiny, nasally, unfunny, useless sidekick who did the world a favor in 2000 by leaving Late Night with Conan O’Brien. From there, he starred in a short-lived sitcom called Andy Richter Controls the Universe, and he got forgettable parts in movies (including Sacha Baron Cohen’s gay lover in Talladega Nights) and television shows.

Richter is to O’Brien as Tom Arnold was to Roseanne.

Conan is hilarious, but Richter is an incredible drag on the show. Sorry, Conan, but I won’t be watching, though I’m a big fan of yours when Richter isn’t around.

Watch the video below, and if you find Richter to be funny, you’re likely retarded. Also, take the poll.