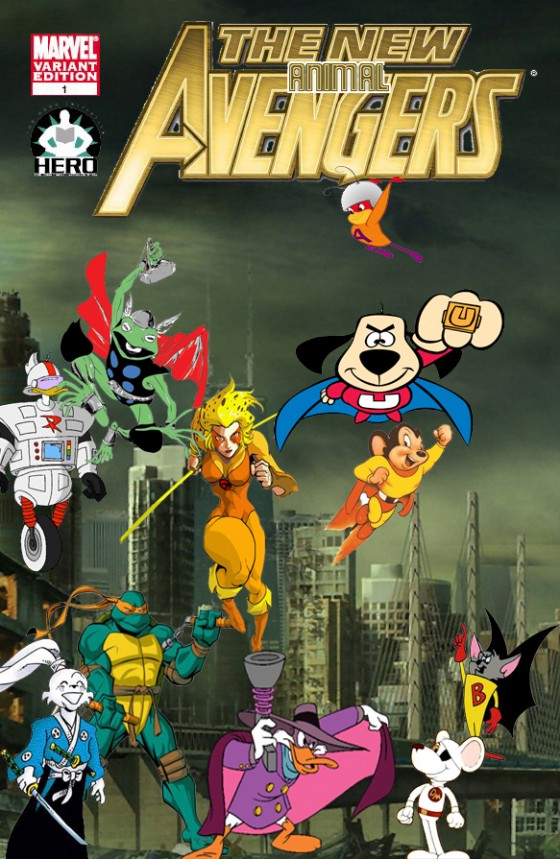 It’s official: The Avengers has become one of the highest grossing films in the entirety of movie history! And it’s well deserved. It was excellent, well acted, and just bursting with action. And now it is high time we branched the Avengers out into different comic book styles. And what better way to kick it all off then with the introduction of “The Animal Avengers.” Let’s read how it’s all gonna unfold… 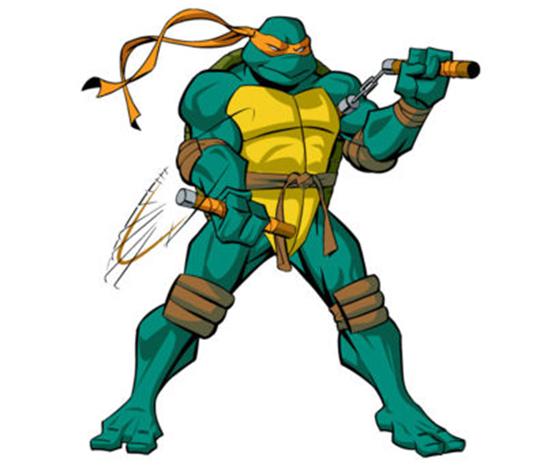 I know what you're thinking: why Michelangelo? Why not any of the other turtles? Well, for starters, Mikey has the closest weapon to Black Panther -- his wicked set of nunchaku. But he also has the most wry sense of humor of the group and, sadly, T'Chala doesn't really showcase any real form of hilarity. So, in all actuality, it should be Michelangelo mixed with the more hard-edged Donatello. But since that would be silly in relation to what I'm trying to go with here, where being silly is relative, I'm going to stick with Mikey. 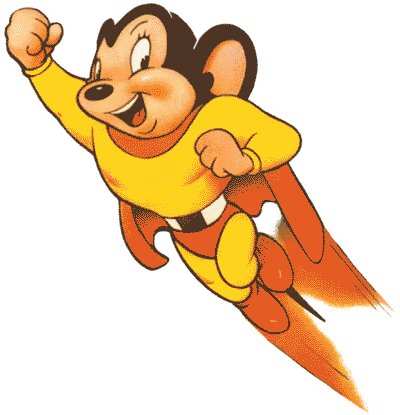 Despite the fact that, A) Wonder Man has been killed and resurrected so many times he likely has some kind of inferiority complex, and B) He was an agent of evil alongside Kang and The Living Laser, Simon Williams is absolutely as invulnerable and powerful as his animal replacement, Mighty Mouse. He can fly (just like MM), he can punch really, really hard (just like MM), and he is, now, an all-round swell guy. Also like MM, except he's a swell mouse... ya see. 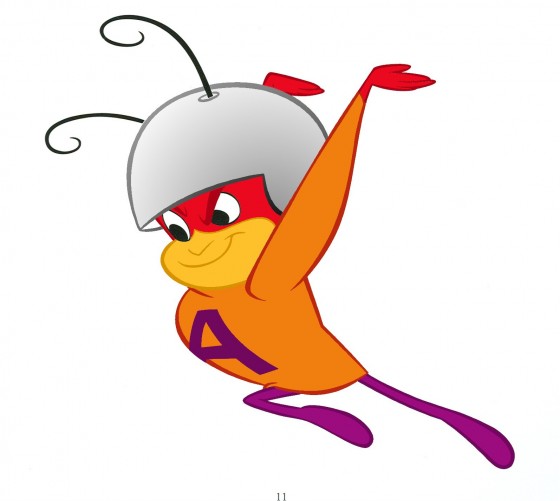 Could there really have been anyone else to portray Hank Pym when he was Ant Man and before he began dabbling in gigantism and identity issues? Nope. Atom Ant is in fact an ant, and would fit in perfectly as Ant Man's partner even before replacing him completely in the Animal Avengers. Where Atom Ant has the proportionate strength and abilities of a super-human at ant size, Ant Man retains his super-strength when he shrinks to ant size. It couldn't be more perfect if it were predestined. 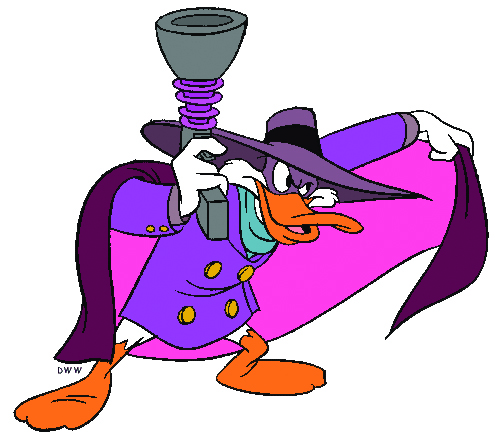 Think about it: Drake Mallard prides himself as being able to infiltrate scenarios where subtlety is key. Sadly, he fails miserably all too often. But if you think about it, so does Agent Coulson; showing up more uninvited than surprisingly, always being where the action is at all times without even attempting to disguise himself or his actions. And in the case of The Avengers, swooning over Captain America. All things that Darkwing Duck would do, and has done. It's a perfect match and with Duck's desire to get in with higher-ups, he'd be a perfect right-hand man to Fury. After all, he is the terror that flaps in the night. 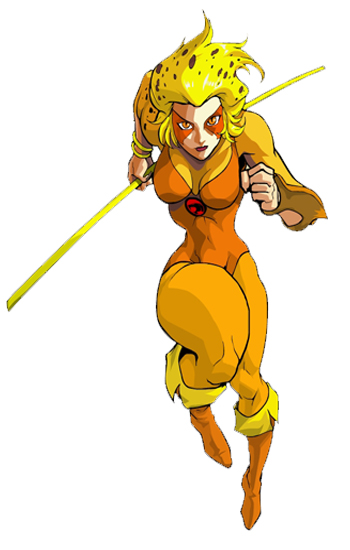 Aside from Janet Van Dyne's wasp (who isn't represented here for various reasons), Black Widow is -- at least in her present tense -- the only female member of the team. Though in the comics she took a waning interest in Tony Stark, a failed attempt to defeat the Crimson Dynamo, and a complete defection from her Soviet roots, Natasha Romanoff does eventually gain membership in the Avengers. Now, in the case of her animatistic counterpart, Cheetara, she likely wouldn't need to defect from The Thundercats, Instead, she'd just take a leave of absence. Ultimately though, it's her skills and abilities that  fit perfectly in her role as Black Widow. 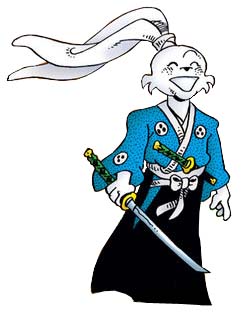 Much akin to the Ninja Turtles, Miyamoto Usagi is a master of the martial arts, specifically when it comes to bo staves, swords, and occasionally projectiles. In fact, it's his knowledge of said projectile weapons that makes him a perfect stand-in for Hawkeye. Hawkeye himself possesses no actual super-human powers -- just his innate ability to hit virtually any target with his arrows. His arrows, by the way, are typically trick arrows and use any number of accessories to enhance the destruction to his intended target. Usagi might not actually use a net or a poison arrow, but since the Orient had explosives long before we did, such arrows would be right on (ahem) target. Sorry. 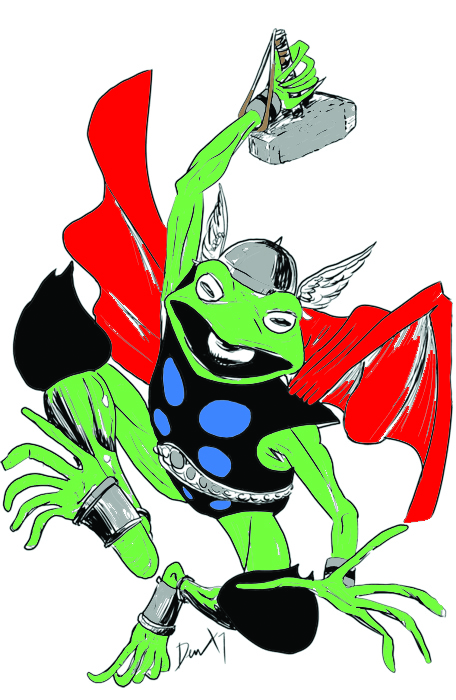 In issue 363 of Thor, during the Secret Wars II cross-over, something incredibly bizarre befell the Thunder God. Set into motion by his trickster brother, Loki, Thor was unceremoniously turned into a frog. Yes, it seems silly, but it really was a pretty fun run in an otherwise stagnant storyline. Thor-Frog eventually goes on to aid some actual frogs in Central Park. But the best part was that he kept Mjolnir and retained much of his strength when in amphibian form. It was cool, okay? And it works incredibly well here. We'd just need Loki to whip up that spell again... something I'm sure he's all too happy to do. 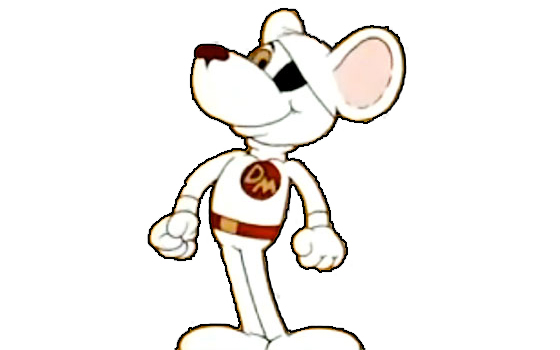 All it takes is one look at Danger Mouse to see precisely why he is spot-on perfection for his role as Nick Fury. Granted, Fury played a much more muted role in the original incarnation of the comic book Avengers, he is decidedly more prominent in the films. With his eye patch, skill as a leader and, in the mouse's case, incredible acrobatics abilities, Fury would be more than impressed with the British spy's style and grace. In fact, no one else in the anthropomorphic animal kingdom could really pull it off. 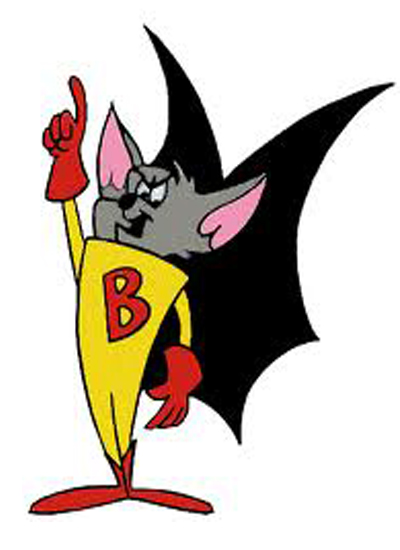 This one, oddly, was the most difficult pair of boots to fill. There really is no animal that truly represents the good old Stars and Stripes that would easily be shoe-horned into the role of the Captain. So, the closest I could find was good old Batfink. His sonar fits in pretty well as Cap's natural feeling for evil and anti-Americanism afoot, and Batfink's metallic wings and gauntlets are a pretty slick representation of Cap's shield. Sure, it isn't as perfect as some of the other animals, but I think the 'Fink would do justice to the American icon. 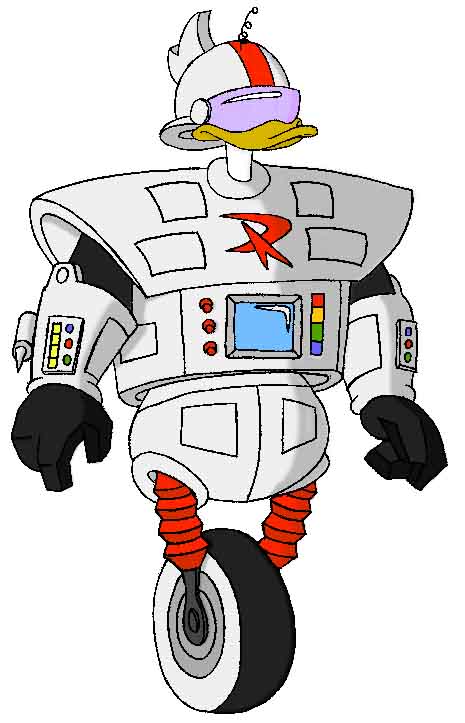 Once again we have a coupling that was almost too perfect to pass up. Where Iron Man is Tony Stark, GizmoDuck is Fenton Crackshell. Though Iron Man was designed by Stark himself, the GizmoDuck suit was designed by Gyro Gearloose under the password protection of the nonsense word (a word that Fenton oddly used all the time) 'blatherskite'. As GizmoDuck, the suit contains enough gears and gadgets to almost put the Iron Man suit to shame. Granted it's likely not as powerful and slightly more problematic than Stark's armor, it would fit in stunningly as its animal-filled replacement. 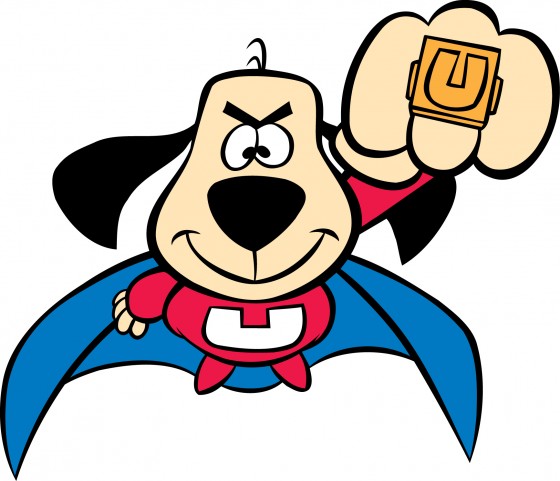 In all honesty, there really isn't an animal superhero that even slightly matches up to the Hulk. Let's face it, the Hulk is as close to invulnerable as you can possibly get without actually being indestructible and goofy. I had considered The Tick, but he is actually a man in a suit. So what better animal more compares with Banner and his alter, monstrous ego than Underdog? Think about it: Banner needs anger to fuel his rage, Shoeshine Boy needs his power pill to activate his powers. Both rely on outside influences to become their super-selves. As Hulk, not much can do him any physical harm, and as Underdog, the same rules apply. In fact, as superheroes, they truly are almost identical and it's this reason that the dog finds himself in the role of The Hulk.