Animal Print Onesies Have Been Banned from an English Zoo

Onesies are pieces of clothing designed for people who aren’t interesting enough to hold a conversation without a huge piece of stupid fabric hugging every inch of their body. They’re also apparently really popular. So popular in fact an English Zoo has banned people from wearing them, if they’re emblazoned with an animal print design that is.

As weird as it sounds, Chessington World of Adventures in England have passed a new rule to stop people from entering the park while wearing any kind of animal print, in particular onesies. Though if we’re honest, if someone thinks wearing a leopard print onesie to a zoo is a good idea they should have been punched in the face long before they got out of the door.

The zoo recently passed the new rule due to animal printed clothing supposedly confusing the shit out of the animals. Apparently it was baffling for the animals to see bipedal tigers driving cars. They might be majestic, but boy do people think they’re stupid.

But here’s the weird thing, along with the usual prints you’d expect, tiger, cheetah and leopard, the zoo has also banned the wearing of African wild dog style print. Wait, is that even a thing?

So what happens if you’re wearing a onesie and decide to visit this zoo, well for a start they have hired bouncers to check people as they enter the zoo and if you happen to be caught wearing any kind of animal print you’re given a plain grey boiler suit to wear. Because letting people wear animal print isn’t allowed due to it being irresponsible, but letting them look exactly like a janitor is totally okay.

Oh, England, whatever will you do next. 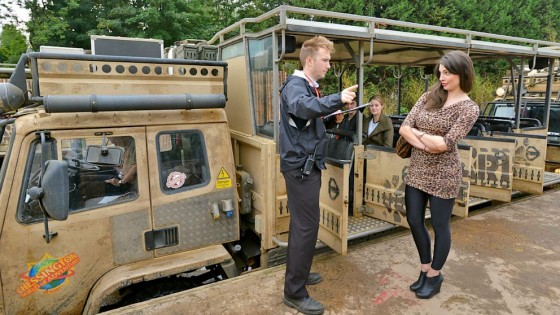