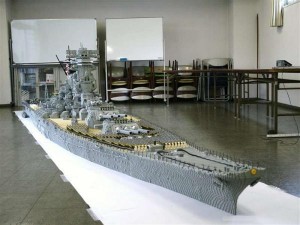 I may need to update the The Awesomeness of Legos post, as we have a new contender. Japanese LEGO™ craftsman Jun Brick has recreated the famous Japanese Battleship Yamato in Lego form (the real World War II-era one, not the space battleship). He’s documented the building-in-progress on his site, which took six years and four months in total. In some ways the making of might be more interesting than the final product, which is nonetheless impressive. The superstructure aircraft carrier measures with a length of over 21 feet and and a height of over three feet. It weighs in at over three hundred thirty pounds.

You can read more about the actual Battleship Yamato over here. In its time, it was a legendary bit of engineering, much like this Lego version. It also remains an important cultural artifact to the Japanese, as it was meant more as a symbol of national prestige than a practical weapon. For more pictures of the Lego Yamato, simply click here for Mr. Brick’s site.