Media > Celebrities > Yet Another Reason to Hate Katherine Heigl

Yet Another Reason to Hate Katherine Heigl 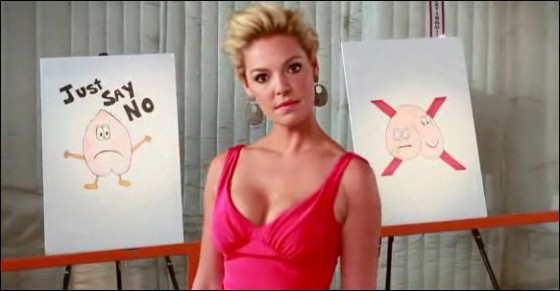 Remember when Funny or Die videos were actually funny? Yeah, neither do I. One contributing factor in their slow decline into irrelevance is the frequent casting of unfunny people. Like for instance, Katherine Heigl, who flaunts her massive rack (which is completely wasted on her) and 1950s era hair in a recent public service parody called “I Hate Balls,” which supports the spaying and neutering of pets. Brace yourselves for three minutes of endless and unoriginal nutsack jokes.

Is this lampooning or applauding Heigl’s reputation for being a pretentious hag? I can’t tell. Nevertheless, it’s for a good cause so bashing her too much would be petty, right? Wrong. This is the same bitch who pitched a hissy fit when asked to remove her bra during a Knocked Up love scene. Yo Katy, ditch the holier than thou act and flash those melons. You’ll gain a lot more respect when you do.