Ant-Man and the Wasp : Review 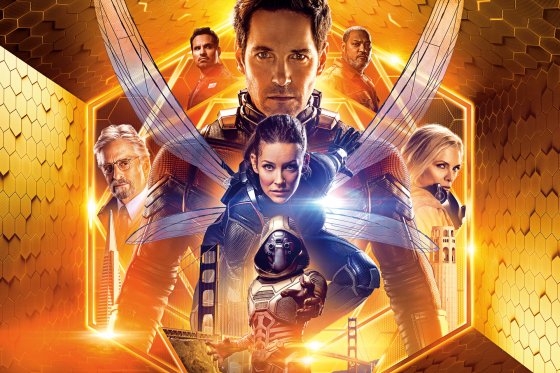 For all the whiplash action and laugh-out-loud humor in Ant-Man and the Wasp, there’s a certain “haven’t we been here before?” undercurrent tugging at our sleeves like a needy child demanding attention. We know it’s there, we don’t want to give any thought to it because we’re having way too much fun, but the fact remains: 2015’s Ant-Man was a story about trying to keep technology out of enemy hands. Ant-Man and the Wasp uses the same theme, only this time – as if affected by Hank Pym’s (Michael Douglas) size-altering wizardry – the stakes are raised and exaggerated, with more antagonists to fight and a whole city in the balance. 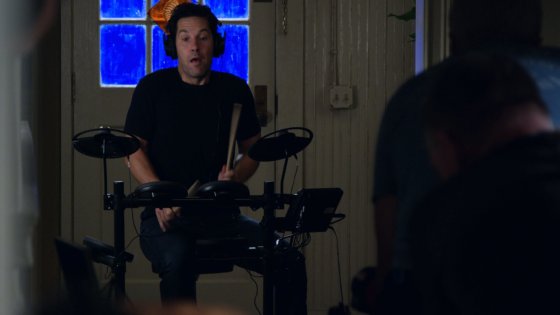 Thankfully, it’s only one part of the multifaceted Ant-Man and the Wasp, and almost an ancillary one at best. We’re too busy reacquainting ourselves with Scott Lang/Ant-Man (Paul Rudd), merely three days away from ending two years of house arrest for his involvement in the events of Captain America: Civil War. The post-prologue scenes give us a hope fulfilled: Scott is doing the best he can under his circumstances as father to precious and precocious daughter Cassie (Abby Ryder Fortson). He’s even turned his entire three-story San Francisco residence into a gigantic funhouse to keep her entertained, where we humorously discover the FBI’s response time and procedures when his ankle monitor crosses his property line.

As expected, Rudd carries on his portrayal of Scott the Everyman in winning style, endearing us to him with his aw-shucks charm, his genuine fallibility, and his willingness to be the target of the film’s comedy. It’s impossible not to like Scott (or, really, is it Rudd just being Rudd?), especially when shown how he treats those around him. He lends a heartfelt humanism to what would ordinarily be just another cog in the Marvel machine, with most everyone else being nearly robotic and always predictable with their actions and motives.

The preceding sentence refers to the father-daughter duo of Hank Pym and Hope van Dyne (Evangeline Lilly). Written and performed dutifully as the straight-ahead, hard-nosed contrasts to Scott’s flailing-goof persona, Hank and Hope keep the film grounded and focused on the mission: to bring Hank’s presumed-dead wife Janet van Dyne (Michelle Pfeiffer) back from the Quantum Realm. They’ve been trying to do it on their own, but Scott gets involved after a message from Janet goes to him – *not* them – when they turn on their experimental Quantum Tunnel for the first time. Much like how Limbo in Inception is attached to whoever’s been down there, Janet can only communicate with Scott because he’s the only one who’s been to the Quantum Realm and escaped. 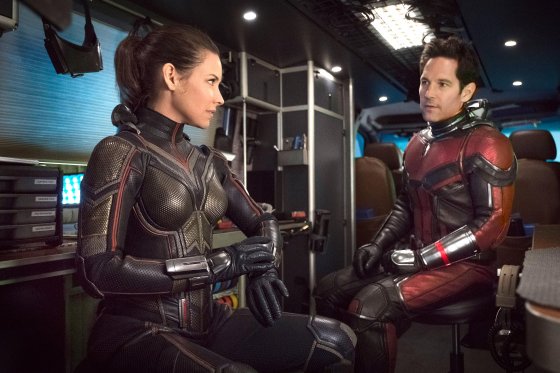 Meanwhile, there are three factions keeping Team Ant-Man from achieving their goal. The FBI, in charge of Scott’s house arrest, is also looking to apprehend Hank and Hope for furnishing Scott with the Ant-Man suit, a direct violation of the Sokovia Accords. Agent Jimmy Woo (Randall Park) and his fellow Fibbies are treated as the lighter of the antagonists, evadable at every turn and serving as the film’s collective comedic foil.

Up one notch on the danger scale is Sonny Burch (Walton Goggins), a shady tech dealer who furnishes the last piece needed to make the Quantum Tunnel function properly. However, his greed and malice prompt him to withdraw the deal, extorting a potential partnership with Hank instead. Burch and his goons are formidable opponents, but since almost nothing is sacred in this film, they’re given a fair amount of comedy to dole out, especially when one of them uses a truth serum on Scott’s garrulous friend and business partner Luis (Michael Peña). 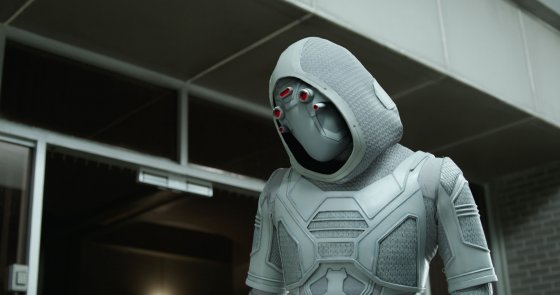 Which brings us to the film’s deadlier side, embodied by the Ghost (Hannah John-Kamen), a not-quite-villain whose body can’t stop phasing in and out of our dimension. There’s absolutely nothing funny about her or her motives; she’s willing to kill anyone – and will even strand Janet in the Quantum Realm – to try to get back to normal. John-Kamen brings the Ghost’s single-minded madness to furious life, playing her as a woman at the end of her rope with nothing to lose, fighting for her life the only way she knows how.

Ant-Man and the Wasp thunders along at breakneck speed, with breathtaking action and eye-popping visual effects powering this rowdy adventure of a lifetime. Director Peyton Reed nails down the requisite Marvel vibe, keeping the film flying and loose, never wanting to be tied down thematically or script-wise; there’s always something diverting your attention away from whatever might have happened in the scene before. We’re jounced around like a ball in a pinball machine, pinging and clanging whenever Team Ant-Man runs up against the many obstacles they encounter throughout.

Action sequences bombard us at all moments, making the most of Hank’s shrinking/enlarging tech. Much like the first film uses a Thomas the Tank Engine toy at a very opportune time, Ant-Man and the Wasp features moments of sheer incredulity by enlarging objects at during a chase or a fight. The finale’s no-holds-barred crash-fest through the streets of San Francisco rivals those found in films like Bullitt and The Rock (with Ant-Man and the Wasp definitely one-upping the latter), resulting in one of the most thrilling and mind-blowing sequences this side of Doctor Strange’s cerebrum-bending dimension-altering. Impossibility made manifest is the reason we watch Marvel films, and Ant-Man and the Wasp lays it all out on the screen for us, holding onto our theater seats for dear life as we careen down Lombard Street in ways you’ve never seen before. 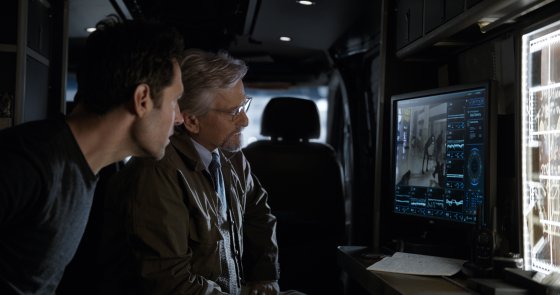 The film moves like few others, its kinetic nature owing largely to the urgency of Hank and Hope’s mission. Scott is merely a means to their ends, seemingly appearing only when they need muscle. They are the true protagonists of both of these films, with the main conflicts belonging in their court. In the first, they’re trying to keep the Pym Particle from an evil weapons developer; in this film, they’re trying to rescue the long-lost Janet. Of course, all of it couldn’t be done without Scott donning the Ant-Man suit and doing his thing; he and his family provide the audience with the emotional hooks and comedic requirements of a Marvel film, becoming the side-story through which we find our own connection. 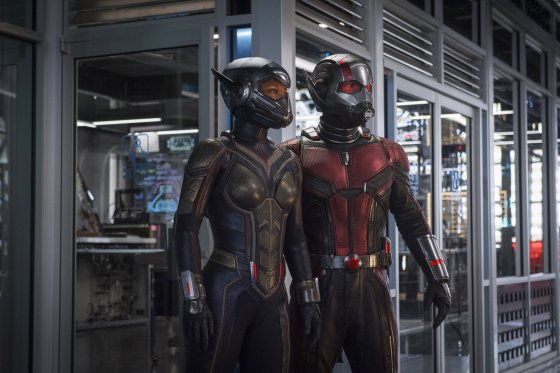 Ant-Man and the Wasp takes place alongside or just before Avengers: Infinity War. It’s hard not to let prior knowledge of the latter color your enjoyment while you wait for Team Ant-Man to catch up. If we are to think of the triple punch Marvel landed in 2018 as a three-course meal, consider Black Panther as the first entrée, Avengers: Infinity War as a “great bleeding, fat-rippled” côte de boeuf (thank you, Anthony Bourdain), and Ant-Man and the Wasp as the refreshing, palate-cleansing crème brûlée. Ant-Man and the Wasp is full of whimsy, laughs, and heart, even with Avengers: Infinity War hanging like the Sword of Damocles over our heads at the dinner table. The film is packed with so much to entertain and amaze, you’ll almost forget entirely about the fate which awaits the Marvel Cinematic Universe… at least until the first mid-credits scene.

Ant-Man and the Wasp

Ant-Man and the Wasp finishes the great Marvel three-punch combination of 2018 with whimsy, laughs, heart, and eye-popping action.