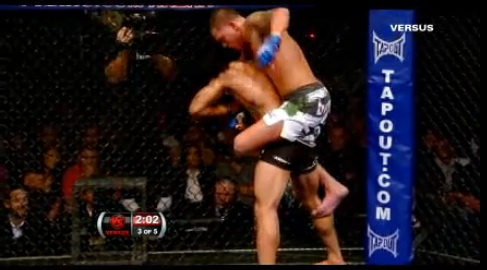 The calm before the storm...

OH. MY. GOD. If you missed out on the last WEC 53 on Versus, like me, you missed an amazing card and some CRAZY shit.

I know this clip is everywhere right now, including ESPN (who actually posted the YouTube video and garnishing #2 on the Top 10 Plays) but it deserves to be on this site. Consider it my holiday gift to you, the loyal and dedicated Gunaxin Sports reader.

This fight was between Ben Henderson and Anthony “Showtime” Pettis for the WEC Lightweight Championship. If you are lazy (unlike me this time) you can catch the highlights… and from those the highlights, the fight looked to be a fast-paced war. Both guys scoring significant blows, take-downs and submission attempts.

However, it was a five-round fight and, in the end, Pettis wanted it more.

This fight was a perfect way to cap off the underrated WEC promotion as it is being absorbed by the UFC. Will guys like Pettis be able to compete against the winner of Frankie Edgar and Gray Maynard? Possibly, and hopefully he comes up with another silly samurai kick that lands him in the Hall of Fame of my heart (and don’t count Henderson out… he looked very impressive up until getting his brain cells vaporized with a foot to the face by a Bruce Lee flying scissor kick).

It’s a fight like this that really makes you remember what being a mixed martial arts fan is all about: insane acts of athleticism and violence.

I’d count on seeing this clip for years to come on UFC and MMA’s best kicks of all time. Whether it is the best is still a debate, but it has to be in your top five.

Seriously… did you see him jump off the cage?