Media > Music > The Apocalypse Playlist… Songs to Die To

The Apocalypse Playlist… Songs to Die To 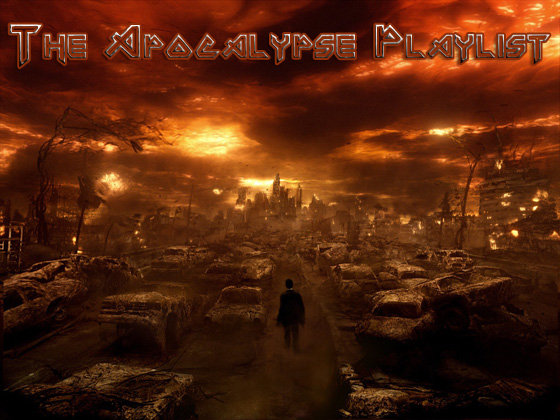 There are many songs about the end of the world, or at least ones that allude to it, but most of them don’t really fit the scene for the last hour of humanity on Earth. Like in a film, we’ve gotta score it properly. But since we don’t want to hire a composer, like John Williams or Danny Elfman (because the end of the world will be a cartoonish Tim Burton-imagined drama with Johnny Depp as the Antichrist), Gunaxin will set up speakers and DJ the remaining hour as people are running out to the streets and barfing blood as a horrible virus wipes out mankind in the middle of a nuclear war, alien invasion and coming of the Messiah.

We’ll spare you REM’s “It’s the End of the World As We Know It” because if that’s playing, we’ll be looking at our watches and asking what’s the holdup. Also, we won’t be taking requests, because the timing is too important, as the last song must end for the last man standing to hear (which means more people will actually be around to hear the earlier ones, so the last one could be “Who Let the Dogs Out” but too few will be around to give a damn).

We’ll start off with an obvious one, at least to the older folks who know this as something other than that ‘MORE COWBELL’ song. This was used in the TV adaptation of Stephen King’s The Stand when the virus escaped. It worked well there and it’ll be a great opening song for this final event. Here’s how it’ll play out:

It’s still early and despite the sirens, car crashes, and bodies piling up, not everyone is aware of what’s going on. This song will get them off their sofas. They’ll look out the window to the park where they’ll see, DYING SWANS…

I’d also like to bring up the point that most of Iron Maiden’s music fits in well with the end of the world chaos. If we had to choose one band to play the Final Concert, it’d be these Brits. Check out Gunaxin’s Best Iron Maiden Songs You Haven’t Heard.

Thought we’d pick “Symphony of Destruction”? Nope, this one’s better. Plus, it’s because aliens invade and help obliterate us.

When the Levee Breaks
Led Zeppelin

This one is for those who either live below sea level or on the coast. It’s what would’ve been playing – on repeat – if Gunaxin was the DJ during Hurricane Katrina.

This song is about the tenth plague of Egypt in the Torah. It’s been centuries since the Angel of Death crawled across the land taking first born man. This time, Death is being far less selective about who it takes and doesn’t care about lambs’ blood on the door.

Yeah, I know, way too obvious, but after all, it is Manson, and who better than the Antichrist Superstar to get airplay as fire and brimstone rains down?

No One’s There
Korn

Korn, too, is a band that deserves some airplay, and we’ll select this song amongst a bunch of other great ones. We would’ve selected “Hollow Life” but the destruction of humanity pretty much answers the question Where is God?

In the End
Linkin Park

Another obvious song, but the tone is right as we dip in population below ten million worldwide.

NIN has a few songs that could’ve been considered, but we’ll select one that captures the perfect tone of how things are toward the end.

If you are seriously curious about what happens to our beloved planet after that, you can find the answers here.