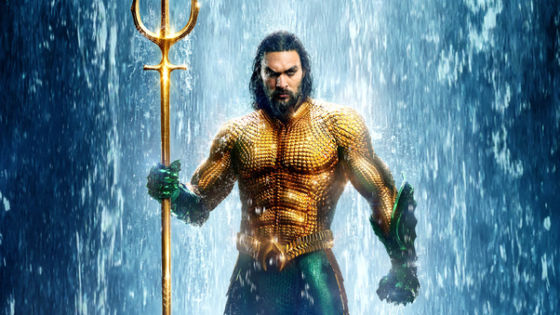 The first major, non-cameo appearance of Arthur Curry/Aquaman (Jason Momoa) in the DC Extended Universe (DCEU) came with last year’s Justice League, establishing him as a man of action with an offhand, bro-tastic attitude as thick as his biceps. In the year since Justice League’s release, we’ve been titillated with ads and trailers featuring Aquaman in his first solo outing, brought to you by the director of The Conjuring and Furious Seven, James Wan. 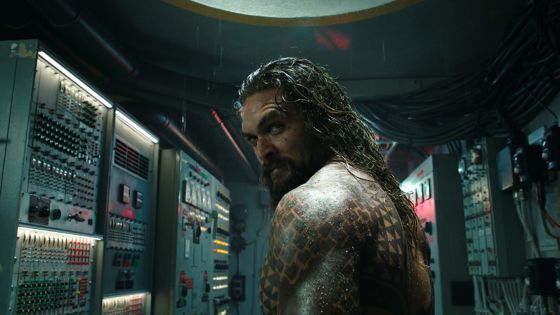 Momoa continues to have fun with his headstrong, blithely heroic portrayal of our favorite half-man/half-Atlantean, and it’s just enough to carry us through the nearly two-and-a-half-hour runtime of Aquaman. After all, it’s his name on the posters, so Wan directs all of our attention to Arthur and how he’s suddenly thrust into a position to ascend to the Atlantean throne. 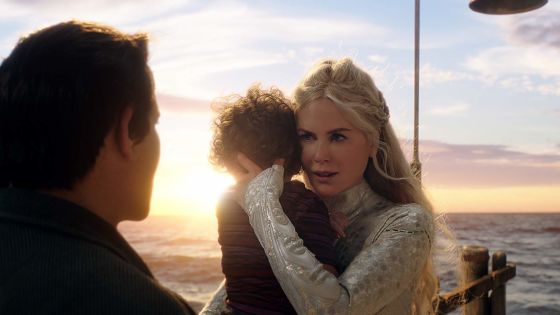 However, it’s not something he actually wants, as he’s happy being kind of a go-between for the worlds above and under the sea. The kingship is his by birthright, being his mother Atlanna’s (Nicole Kidman) first-born son. Having abandoned Atlantis to escape an arranged marriage, she meets and falls in love with Thomas (Temuera Morrison), a lighthouse keeper who tends to her injuries after finding her on a rocky shore. Soon after having Arthur with Thomas, Atlantean guards come to take her back to fulfill her duties as Queen of Atlantis, eventually bearing another son, Orm (Patrick Wilson). 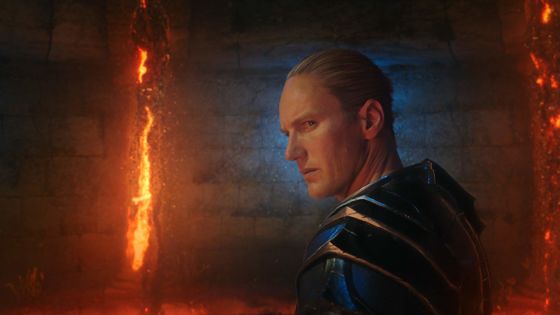 As Arthur has been raised on the surface, his values and respect for humanity are seen at odds with how Orm runs Atlantis. Orm is convinced they are the superior race, and Arthur has no place in their world, especially after their mother was given a death sentence and sacrificed to beings called The Trench. Terms like “half-breed” and “bastard” are thrown about like an episode of “Game of Thrones,” underscoring themes of familial loss and racial purity. While Arthur treats both humans and sea life equally, Orm has gone down a completely different path, which plays into the film’s other theme: environmentalism. 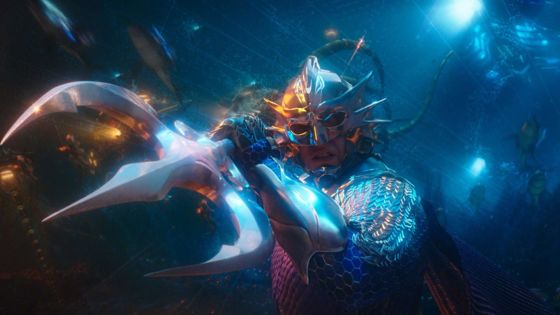 Orm and the other undersea rulers are tired of finding trash in their oceans, seeing aquatic life struggling through discarded six-pack holders and the overwhelming evidence of man’s cruelty toward the earth. Because of this haunting reality, Orm has taken it upon himself to declare war on the the entire human race, and he’s got a point. Humans lob punches at and destroy a little bit more of Mother Earth every day; what if it’s time for her to punch back? 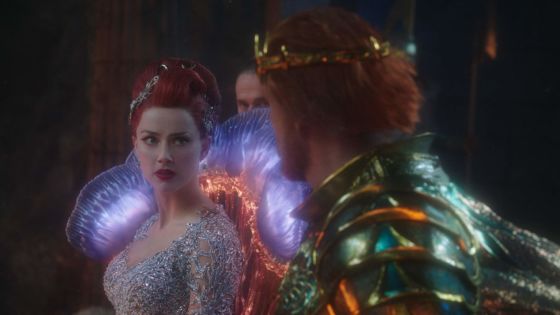 Enter Orm’s bride-to-be, Mera (Amber Heard), last seen in Justice League trying to hold Steppenwolf off of the seabound Mother Box. Allying herself with Arthur, the two begin a quest which, for all intents and purposes, is a direct adaptation of Arthurian legend. No, not Arthur Curry’s legend; we’re talking about “Arthur, son of Uther Pendragon from the castle of Camelot. King of the Britons! Defeater of the Saxons! Sovereign of all England!” (Please tell us you’ve seen Monty Python and the Holy Grail.) The prophecy Arthur and Mera are chasing down involves an ancient sword trident which can only be held by the one true king of the sea… 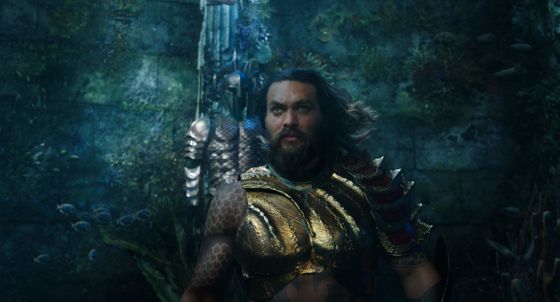 Sound familiar? Don’t worry; other scenes and parts of Aquaman’s plot will sound familiar as well. For a film already based on an existing property, it surely feels like screenwriters David Leslie Johnson-McGoldrick and Will Beall cobbled together (read: stole wholesale from) scenes from other films and thought it’d be a good idea to cram as many of them as possible into their script. Scenes and plot devices from How to Train Your Dragon 2, Indiana Jones and James Bond films, The Abyss, Three Days of the Condor, Tron: Legacy, Song of the Sea, and other films – not to mention the straight assimilation of the Excalibur legend – all find their way into Aquaman, rendering it almost totally predictable and unoriginal. 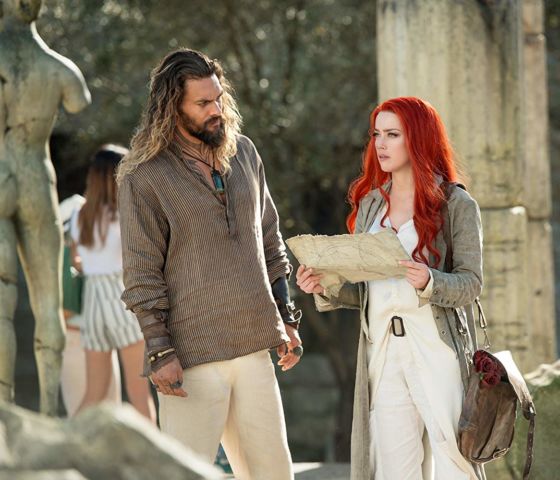 Much like we’re bounced around from lifted scene to lifted scene, we’re dizzyingly catapulted from location to location, with large yellow titles helping us keep track of where we are at any given point in the movie. We move with whiplash-causing speed from Arthur’s home in Maine to Atlantis to the Sahara to Sicily to OW MY NECK HURTS. Aquaman never grants moments in which to dwell or at least catch our breath, as Arthur and Mera have to keep outrunning Orm’s forces along with a new threat in Black Manta (Yahya Abdul-Mateen II), a mercenary hired to hijack a submarine in the film’s opening moments. 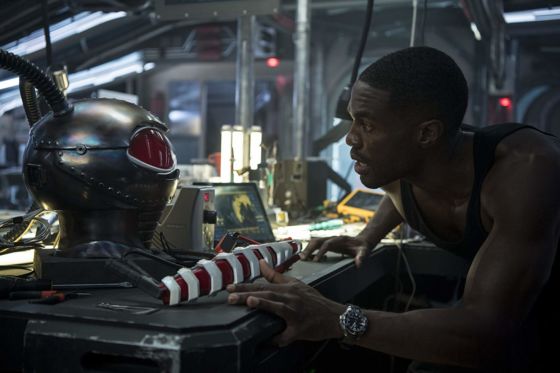 For all of these gripes, Aquaman is loads of fun. The filmmaking is adept, and Wan doesn’t shy away from his horror roots, providing some lasting imagery which might scare younger children. Arthur and Mera’s descent into the world of The Trench can be the stuff nightmares are made of, with horrifying creatures swarming around them in a very harrowing sequence. (Author’s note: I took my six- and eight-year-old daughters to this film, and this scene spooked them pretty badly. And they’re fans of Army of Darkness.) Although the constant location-jumping during their scavenger hunt can be a bit much, it’s paced well and lends a spirited kineticism to a fairly long film.

The film rides or dies with its CGI-driven scenery, with the quality of the work varying from astounding to “They had a $200 million budget and a simple close-up of someone against a sky looks like THAT?!” With all the effort put into making the undersea dwellers look normal while their hair moves naturally with the water, maybe some things got missed. Regardless, this film doesn’t lack for visual flair. There’s always something new and inventive to look at, whether it’s an Atlantean craft gliding through a foreign kingdom or a fairly thrilling rooftop chase in Sicily. 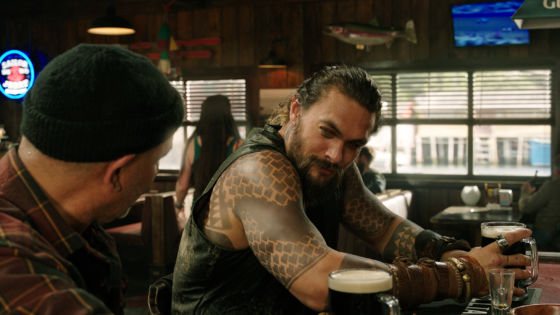 Grounding us are the duo of Arthur and Mera, the only two Atlanteans we’ve met before this movie. Momoa and Heard have a fun, ying-yang kind of chemistry going on, with Heard playing the straight character to Momoa’s brutish, brooding, brew-swilling… dude. The term “dude” hasn’t fit a fictional character so well since Jeffrey Lebowski or Ted “Theodore” Logan. Arthur’s the “kick ass first, ask questions later… if they’re still breathing” kinda guy, cracking wise and not really giving a crap about the damage he inflicts or odds he faces. He can afford to, as he’s impervious to anything but Atlantean weapons; bullets don’t faze him, nor do human knives. This takes a lot of the danger and suspense out of the picture, leaving us time to enjoy him tossing off a humorous bon mot before watching him pound another being into next week. 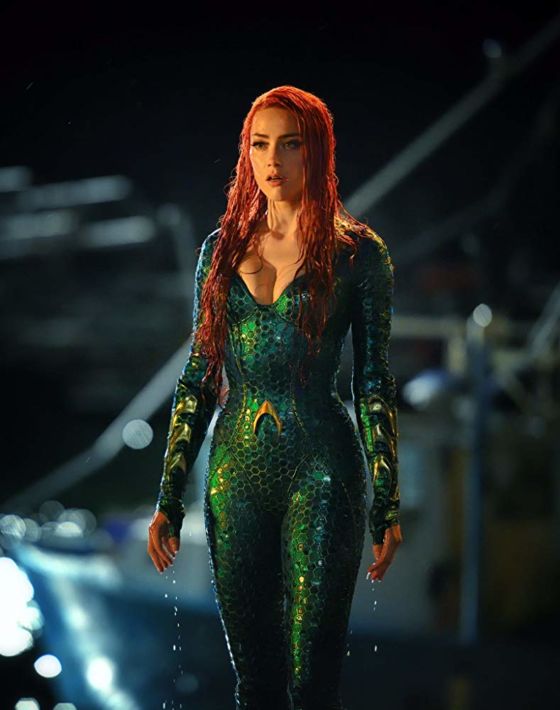 Balancing him out is Mera, a thoughtful woman rightfully scared about what’s happening in Atlantis, and who has a devil of a time wrapping her head around Arthur’s callousness. She’s smart, capable, and daring, holding her own alongside Arthur’s hulking presence. Heard gives her a brain with a huge dose of sass, but she also gives Mera the heart of the film. There are scenes which use her to slow Arthur down a bit (not in a bad way) so we can appreciate the little things about what’s happening, whether it’s a first airplane ride or figuring out why someone’s given her a bouquet of roses. She’s also good in a scrap, as well, fighting with the soul of a warrior and giving as good as she gets. Mera’s no jump-on-the-bad-guy’s-back princess; she’s a terrific example of how female characters should be treated, formidable and given the opportunity to forge her own path. 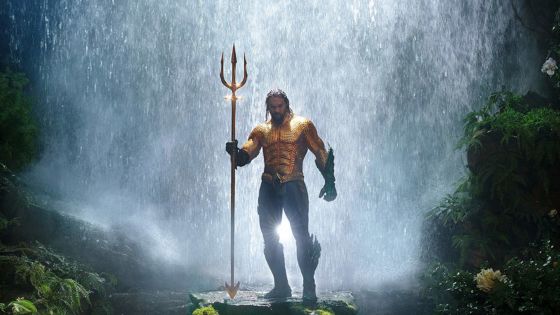 Once you get past the “I’ve seen this before” vibe, Aquaman is steady, rock-solid entertainment. As expected, this is Jason Momoa’s breakout film role, and he doesn’t waste a minute of it, hilariously posturing and preening for both the audience’s (and Mera’s) delight and laughter. It’s not without warrant, as he rises to each and every occasion to dish out his own brand of justice, being the unstoppable force and the immovable object. Aquaman does not disappoint, with its stirring thematic material paired well with straight-ahead, exciting action.

MPAA Rating: PG-13 for sequences of sci-fi violence and action, and for some language.
One mid-credits scene.
Running time: 143 minutes.
Released by Warner Bros. Pictures.