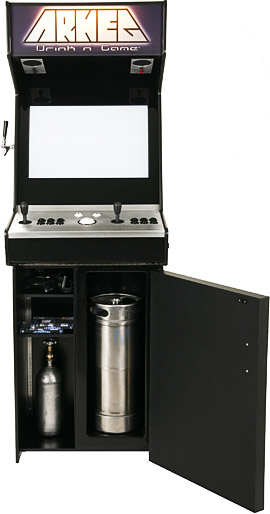 When Beer and Gadgets converge, we’re on it like a rat on a cheeto. We had to do a bit of math in the title, in case this was confusing to people. Essentially this thing is an arcade game with a built in kegerator. Brilliant! From Uncrate :

Beer and gaming go together like Mario and Luigi, and the Arkeg Drink n Game ($4,000) offers up plenty of both. This arcade game-styled machine features a fully functioning kegerator in its belly, with room for a 5 gallon keg kept cool by a solid-state thermoelectric cooling system. In addition, it sports a gaming-ready PC, pre-loaded with 69 games such as Asteroids, Mortal Kombat II, and 1942. Other features include a 24-inch LCD with protective overlay, an authentic backlit marquee, a 2.1 sound system with powered sub, two complete arcade controllers and a trackball mounted in a custom aluminum panel, a side-mounted tap with interchangeable handle, and more.