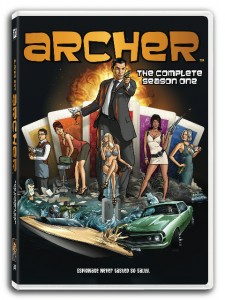 Archer The Complete First Season arrives on DVD December 28, 2010. FX’s original animated half-hour comedy series premiered January 14, 2010. The show is set at the International Secret Intelligence Service (ISIS), a spy agency where espionage and global crisis are merely opportunities for its highly trained employees to confuse, undermine, betray and royally screw each other.

Exclusive DVD extras including un-aired Archer pilot, “Making Of” production shorts, & deleted scenes. The  2-Disc DVD sells for $29.98 and can be picked up at Amazon.com. You can also be entered to win a copy of the first season by following us on Twitter!