Grub > Soft Drinks > Are You Gonna Drink That?

Are You Gonna Drink That? 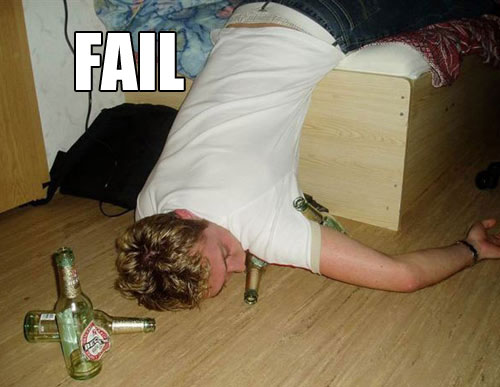 I’ll generally try anything once. If it looks pretty tasty -ya know, within reason- I can typically drum up some grimaces and head shakes from my wife by trying something liquid in a can from the Ethnic aisle of the grocery store. When it comes to drinks, I’m a firm believer that labels are far too often misleading. If seeing the outside of the bottle or can was all we had to go by for what mysterious beverage lie within, no one would drink anything. On another note pertaining to drinking not only unusual, but potentially life-threatening beverages, has got to be every re-blooded American’s 21’st birthday initiation: Bar Hoppin’. I vaguely (and by vaguely, I mean I remember my own birth more vividly) recall my birthday boozefest 14 years ago. Lot’s of unpleasantly named alcoholic mixes, lots of creative shots, and a deal-sealing shot of gin placed on the back of a toilet. Yep, I’ll generally try anything once. Here’s some nasty drinks for ya. Oh, and just for a little variety, the last four drinks are mixed shots meant to otherwise humiliate and/or annihilate the unwary consumer. Bottoms up!

I love me some tea. Straight-up, zero sugar, zero fruity nonsense, and most definitely zero patties of living fungus! I had, before today, never even heard of this vile, horrendous concoction, but, apparently it’s pretty popular in certain circles. Be that as it may, I have yet to see a review boasting about how good it tastes and how much a person can tolerate. God save us. Here’s a video, too, of some slackers whipping up a batch.

It should come as no surprise that I love beer. I drink it, I write about it, I dream about it, I live it. What I don’t do with it is mix in a shit load of tomato-clam juice and claim it’s deliciousness. Though beer may not be specifically ‘Holy’, that is sacrilegious to the Nth degree. If you find it in your obviously F’ed up skull to want to add sea food liquor and a Beefsteak to your beer, I don’t ever want you in my yard. This fun guy get’s to drink this mess!

You know what I’m apparently not getting enough of? Pig placentas. Those wacky Japanese sure do like their bizarre and revolting foods, and I’m guessing they also like to laugh at those of us moronic enough to imbibe such delicacies. I, for one, tend to ignore drinks with ground up birth sacks floating in them, but that’s just me. While you’re drinking your delicious beverage, enjoy the sweet sounds of Carcass. It’s pretty NSFW, if you can even understand it.

It never fails. Every time I’m eating a block of yummy cheese, I end up asking myself, “Why am I not drinking this? It would be a whole lot easier than chewing it.” and then I realize that a cheese beverage would be patently ridiculous and laughably repugnant all at the same time. Then the Japanese come through for me, again. With Berry, Yuzu Citrus, and Plain, even! I’m so lucky! This video is exactly what I imagine this affront to God tastes like.

Is it any surprise that this beer is hugely popular in Montana? Just kidding. This shit is all Japanese, my friend! From what I understand, these cats dig eel in absolutely everything from juice drinks, to ice cream, to candies… crazy folks over there. This video demonstrates the only way an eel ought to be anywhere near a beer.

So, archeological evidence suggests that the Incas, or Mayans, or something (look, I am not a nutritional anthropologist over here) used to use corn in more ways than just for tortilla chips and Chunky Soup. They in fact made a beer-cider type beverage using similar techniques that brew masters use today. Still, according do descriptions and pictures of said drink made today from the ancient recipes, this is something that would be better off running down the drain. I don’t speak a lot of Spanish, but it doesn’t take a language to see how insanely vulgar this mess looks.

Individually, each one of these is well known for putting your drunk ass in a hurt locker. But mix them together in the proper shot ratio, and, well, you might as well bash your skull on the bar because that’s precisely how this monster is gonna make you feel. The video is of a bartender making an Irish Car Bomb and another fellow slugging it down. Cool.

This cohesive nightmare is supposed to all fit in a Tom Collin’s glass and it needs to sit for a minute so you get a whole lot of delicious egg flavor in the already throat-scorching Jager. Then you shoot and try in nauseating agony to gnaw your way through the rubbery, briny, hard-cooked egg. I’m literally choking back vomit just thinking about this. This video is the closest I could find and let me tell you, it still looks more easily swallowed than the Eggermeister.

Seeing a pattern here? Regardless of what food (viscous or otherwise) you choose to mix in to your drink, Jager seems to be the way to go. And by go I mean extract a few precious minutes from your life in one glass. In this drink, you pour the Jagermeister, light it, blow it out and quickly slather with some Hellman’s. I used to smoke and I see where they’re going with this. Why they’re going there… that’s a whole different story. Oh look, some cat named Poo is gonna throw this mess back! Let’s watch!

Man. So nice to end on a high note, right? Vodka: cool, Bloody Mary Mix: alright, cottage friggin cheese? Fail. Just the description alone fits the ingredients perfectly. Anytime you want to call a mixed drink anything with the word infected in it, you just know it has to be delicious. Even with cottage cheese. Here’s a video about vodka.