There’s something amazing going on, and you need to pay attention. 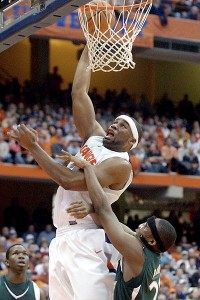 You remember back in 1998 whenever Sammy Sosa or Mark McGwire would come to bat or in 2001 when Barry Bonds would come up to bat? It didn’t matter where you were, you were going to stop, be quiet and watch the at bat, because there was a pretty good chance something amazing was going to happen. You don’t get that too often in sports, and it’s really one of the true measures of whether something is really special. Tiger Woods has that factor, LeBron, Kobe, and Dwyane Wade probably do too, but outside of them, there just really aren’t many athletes who just stop you in your tracks when they are about to do their thing.

I’d like to call the world’s attention to exactly that kind of athlete. His name is Arinze Onuaku, and he plays center for Syracuse University. Most big time basketball fans know of him. He’s a solid enough player, averaging 10.7 points per game and 7.5 rebounds. He also shoots an astounding 67.5% from the field, but that’s not why he’s special…. (continue reading at straitpinkie.com)