An Article on Fighting Procrastination (That I’ll Do Later) 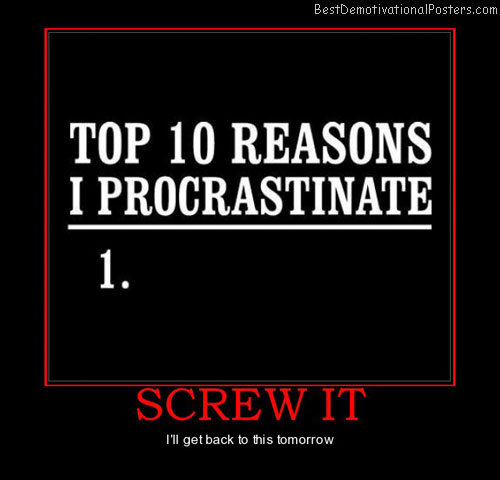 So it turns out that today, September 6th, is ‘Fight Procrastination Day’. I decided, for some reason, that this would make a fascinating subject for an article. Until I realized that it probably wouldn’t.

You see, procrastination is a sickness that a vast majority of our populace would just as soon worry about another time. And I can agree with that, because who really wants to do today what you could just as easily put off till tomorrow? There’s nothing to laugh about when it comes to procrastination, unless you plan to really belt out a hearty guffaw maybe next week or something when you realize, all too late, that you’ve completely ignored the fact that you should have done it when it mattered: that would be today. 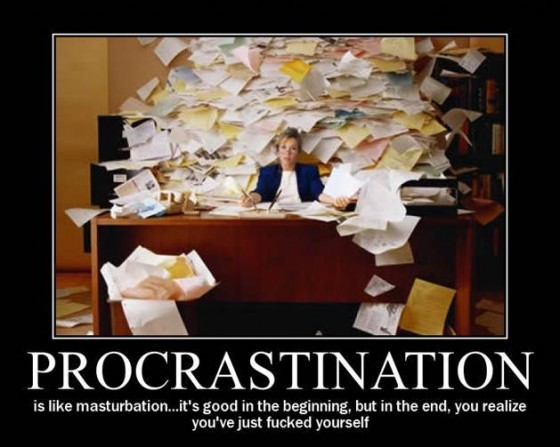 Procrastination is a killer; too bad it takes so long for its agonizing signs to show or else we’d all be dropping dead from it right away. It simmers away for a few days, maybe a week or so, and slowly starts piling up symptoms that should have shown themselves from the onset. It’s more of a dawdling disease that attacks those of us who like to push away things we need to do for another day. Probably Friday, if we (and it) get to it. It’s a silent killer, too. No one hears procrastination coming over the hemming and hawing of everyone changing their To-Do piles to maybe Monday, or at the very latest, next Thursday. There is no known cure, and I’ll finish this sentence later on… 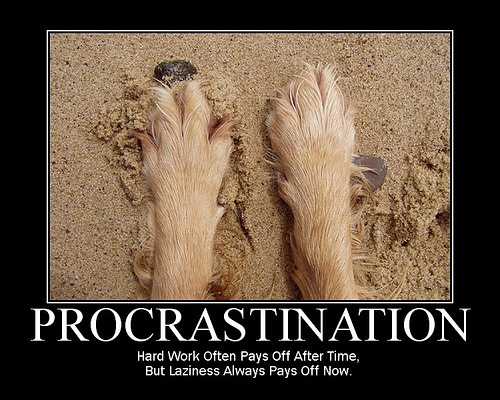 So what exactly is Procrastination? Give me a second and I’ll look it up for you, since I can’t imagine you all taking ten minutes to do it right now.

Here’s what Wikipedia answered for me:

“In psychology, procrastination refers to the act of replacing high-priority actions with tasks of lower priority, or doing something from which one derives enjoyment, and thus putting off important tasks to a later time.”

Here’s more insight I put off for a few minutes while I took a dump:

“Schraw, Wadkins, and Olafson (who I can only assume are psychologists and not a Legal Firm specializing in hit-and-run accidents) have proposed three criteria for a behavior to be classified as procrastination: it must be counterproductive, needless, and delaying.”

I found this interesting about a half-hour after I should have:

“A 1992 study showed that “52% of surveyed students indicated having a moderate to high need for help concerning procrastination”. It is estimated that 80%–95% of college students engage in procrastination, approximately 75% considering themselves procrastinators.

That’s a staggering statistic. And I’ll tell you about it later when I feel I can combine the right words. Right now I kinda wanna play X-Box… 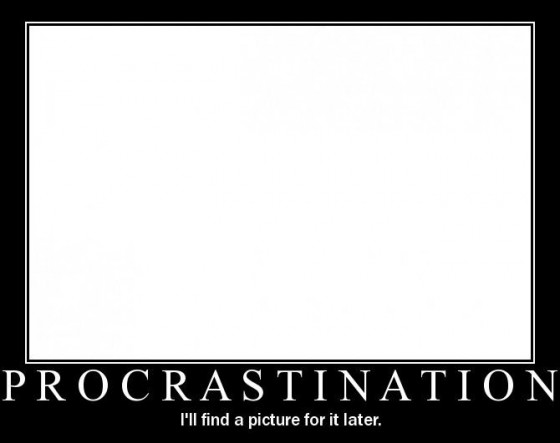 Yeah, ya dope! Knock it off!

Okay, in reality it’s not that simple. If it were, there wouldn’t even be a word procrastination, let alone an epidemic. So what can we do to stop putting stuff off and doing pointless shit? Well, here are a few simple ways in which you, too, can stop procrastinating:

1) Stop trying to avoid the stuff you need to really, really do. Right now. Just stop.

Seriously, you guys! If it’s something that’s obviously supposed to get done, then just do it, already. It’s not like the problem is going to go away just because now it’s scheduled for completion a few weeks from today. Take initiative, grab that bull by the tusks, mix some metaphors, and get down to brass nitty gritty! You’re not fooling anyone, ya know?

If you’re surrounded by stuff that draws your attention away from what you need to be doing, you’re never gonna get it done. If you have a houseful of yammering kids and a wife with a perilously short fuse: leave! Go to a library or a park or a jail! Those places a great for gathering your thoughts and suppressing distraction.

3) Don’t deny the fact that you have a damn problem, scooter! Especially to yourself!

Ignoring it is not going to make it better. Take it from someone who knows: just because you tell yourself that the towering pile of laundry is going to magically organize itself, doesn’t make it so. Unless you know a genie or The Great Gazoo. Then I guess you’re okay. But you don’t, so quit bullshitting yourself and get some professional help or at the very least smack yourself in the head for being such a time-wasting shithead! Go on! Do it! 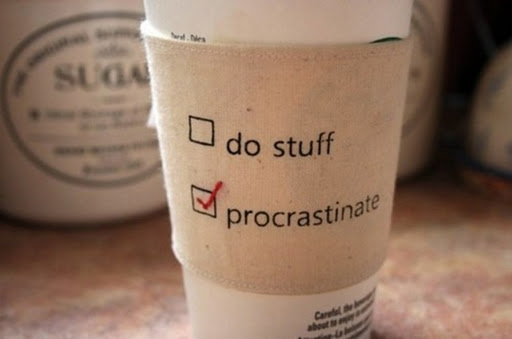 You can do it. I believe in you, and I believe in me! I wrote this diatribe without even really wanting to because I knew it had to get done and I knew, somewhere inside, that maybe I could help someone with my ranting and raving. I can’t believe I’m now just a mere seventeen words from a thousand! See? I didn’t procr– oops, souffle!