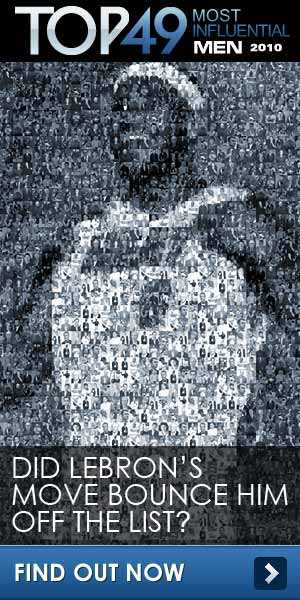 Our friends at AskMen.com have released their list of the Top 49 Most Influential Men of 2010. Again this year, I have no clue why they don’t just make it 50, but its their list, so just go with it. Here is the info:

Now in its fifth year, the Top 49 Most Influential Men challenges AskMen’s 16 million monthly readers to determine which male figures have made the biggest impact, and ultimately, shaped what it means to be a modern man in 2010. The 2010 list of influencers honors men who have broken convention across the worlds of business, politics, technology, media, entertainment and lifestyle. These are not men who have chosen the traditional path to success, but who have nonetheless redefined the way we live today – and have clearly impacted the fans who voted for them

Here are the Top Ten for you, as I’m sure that would be your first question, but check out the site for tons more about these men :

When you’re done looking at dudes, feel free to check out their list of the Top 99 Most Desirable Women, so you don’t set off the Gaydar.