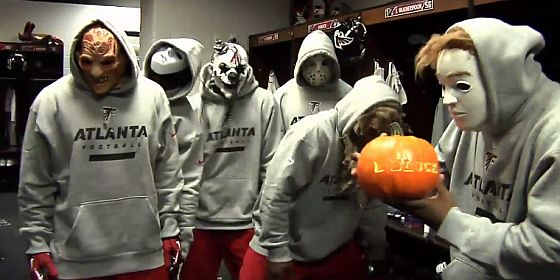 Things are going pretty well for the Atlanta Falcons these days. The Falcons are the last remaining undefeated team in the NFL at 7-0, with a whopping four game lead over second place Tampa Bay in the NFC South. A big part of that success is an opportunistic defense. While the yardage numbers are less than impressive (the team ranks near the bottom of the league in rushing and total yards allowed) the Falcons are causing turnovers at an incredible pace. They are ranked third in the league in both interceptions and fumble recoveries, at 10 and 7 respectively.

All that, of course, means that Atlanta defense has plenty of reasons to be in a good mood. That mood is evident in the videos being produced by the D-Block, the preferred nickname for the linebacking corp. Over the course of the season the D-Block has recorded a series of YouTube videos covering everything from country music to current events, and usually includes interviews with teammates from other units.

This week the D-Block decided to celebrate Halloween, first with an interview with teammates (and brothers) Jacquizz and James Rodgers, then with a bizarre dance straight out of a cult movie. You can skip to the 11 minute mark to see the creepy rhythmic swaying, and understand why opposing teams are quick to give up the ball when playing against Atlanta. 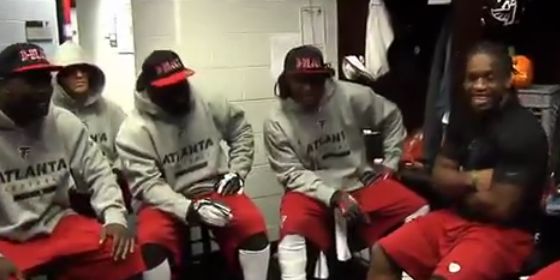 As entertaining as the D-Block videos are, our favorite player is practice squad LB Pat Schiller. The rookie backer is forbidden from talking, or moving, during most of the videos. In fact, we aren’t 100% sure he isn’t a tackling dummy dressed and made up to look like an NFL player.