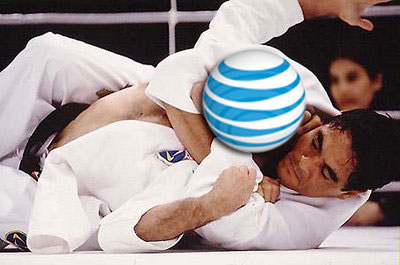 And then he's going to have sex with it.

If you’ve got AT&T, today at 3pm might be a really bad time to try and use your phone: pissed off that AT&T has spent jack on building up their network while getting fat on iPhone profits and then trying to blame the iPhone for it despite it being really obvious their network blows, iPhone owners are going to all start running data-intensive applications to, basically, see if they can crash it.

Normally, we’d argue this is irresponsible and could really hurt people, except it’s AT&T, who used to be a monopoly and are so incompetent that 30% of calls in New York City are dropped. So realistically, none of those emergency calls were going to go through anyway.

AT&T has released a statement :

We understand that fakesteve.net is primarily a satirical forum, but there is nothing amusing about advocating that customers attempt to deliberately degrade service on a network that provides critical communications services for more than 80 million customers. We know that the vast majority of customers will see this action for what it is: an irresponsible and pointless scheme to draw attention to a blog.