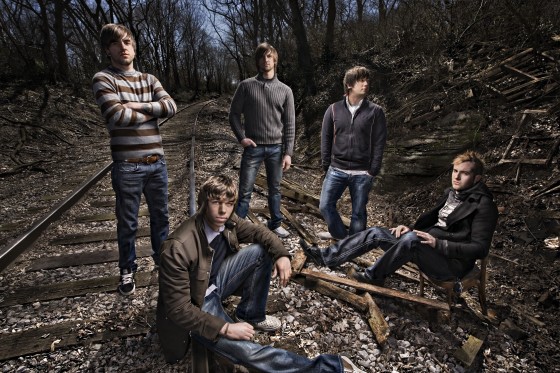 When I first started listening to music that wasn’t played only on the radio I gravitated to bands like Taking Back Sunday, Glassjaw and The Used. As I began to listen to those bands, I found myself wanting heavier and heavier music. I began listening to what a lot of people call “hardcore” or “metalcore” music like Haste the Day.

One of the main reasons I love this music is that it lends itself perfectly to live shows. My boss in college used to book shows as a side gig and he happened to book Haste the Day. Needless to say, I was there. The opening act was Destroy the Runner and after they played I struck up a conversation with the guitarist. He told me the next band (August Burns Red) was better than 90 percent of the bands that play this style of music. I was a bit surprised, because I had never heard of them. After I watched them play “Your Little Suburbia is in Ruins” from their Thrill Seeker album, I instantly became their biggest fan.

Since Thrill Seeker, they’ve released three additional full length albums: Messengers (which could quite possibly be the best metal album of all time), Constellations and now Leveler. August Burns Red has the unique ability to put out new albums that always keep their original and unique sound, but continue to evolve. Leveler is no different.

It still features the same complex drumming, crushing guitars and haunting, abrasive vocals. They have a passion that you can feel in everyone of their songs. Just listen to the last 30 seconds of “40 Days” where he screams “Goliath, we’re screaming your name. Goliath, we’re coming for you!” But they’ve managed to still diversify and improve upon their sound. I’m not saying this album is the best they’ve ever written. It’s almost impossible to top Messengers, but you can definitely sense they’re sound is maturing. They already wrote the best gut punching metal album ever, so now they’re adding entirely new music movements into this albums that haven’t really been present in others.

The first track, “Empire,” is a good representation of the whole album. It features the beautiful breakdowns we’ve come to love, but also gives us more guitar solos that are reminiscent of old school metal bands like Judas Priest and Iron Maiden. It also takes a small journey into some well-placed choral singing. It has that comfortable ABR feel, but sets up the listener to expect some new things coming later in the album.

In fact, the second track, “Internal Cannon” (if you buy the deluxe edition you get an acoustic bonus track of this song), has a sort of playful, almost Latin musical interlude followed by more wicked rock guitar solos. The tenth track entitled 1/16/2011 is entirely instrumental. And it’s not a heavy musical track, it’s more jazzy.

Two other instances of the creative evolution of this band can be found in the fifth track, “Pangea” and the eighth track “Salt & Light.” “Pangea” starts out with some really frantic guitar with a unique tone and ends in some really clever harmonies. “Salt & Light” features some spoken poetry that fits in nicely at the bridge of the song.

The album has a nice flow to it. It’s full of dynamic musical movements. It has all the aggressive metal moments you could ask for, but it also takes some breaks to give you a more complete listening experience. This will surely make their live shows much more complete. Before, ABR did a 30-minute set that essentially punched you in the face for the duration. Now that they’re headlining more and more, they can fill an entire hour with a show that is full of the necessary ebbs and flows of an amazing concert.

Leveler is available to be purchased wherever albums are sold and on iTunes. I highly recommend spending the extra two bucks and getting the deluxe edition that features four bonus tracks. August Burns Red will be playing on the main stage of Vans Warped Tour all summer. Please support this amazing band.