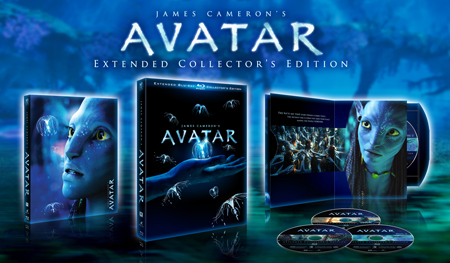 For those who loved Avatar, director James Cameron has more movie for you with the release of Avatar: Extended Collector’s Edition on Blu-ray and DVD on November 16th.

The Extended Collector’s Edition comes with a collectible packaging to get fans to experience Pandora in a whole new way. There are three versions of the film in the set. Fans will get an all-new extended cut of the film and hours of never-before-seen material including over 45 minutes of amazing deleted scenes!

“I told our team — let’s do the ultimate box set of Avatar, with everything in it the fans could possibly want. There’s an extended length cut that’s sixteen minutes longer, plus documentaries, behind the scenes featurettes, artwork and over 45 minutes of deleted scenes. Everything worth putting into a special edition is in this set,” said James Cameron.

The three-disc Extended Collector’s Edition Blu-ray and Theatrical Special Edition Re-Release DVD will both feature the original theatrical release, a special edition re-release, family audio track with all objectionable language removed and a collector’s extended cut with sixteen more minutes including an exclusive alternate opening Earth scene. One thing I love about the new content is that you see the many ways the story could have started or ended. Plus, with commentary from Cameron, you can see why he made certain choices to make the final cut of the film.

Viewers will journey to the depths of Pandora with filmmakers during “Capturing Avatar,” an in-depth feature-length documentary covering the 16-year filmmaker journey including all new interviews with James Cameron, producer Jon Landau and cast and crew exploring James Cameron’s unique vision for the film. The Oscar and Golden Globe winning epic is the highest grossing film of all time, taking in over $2.7 billion in worldwide box office. 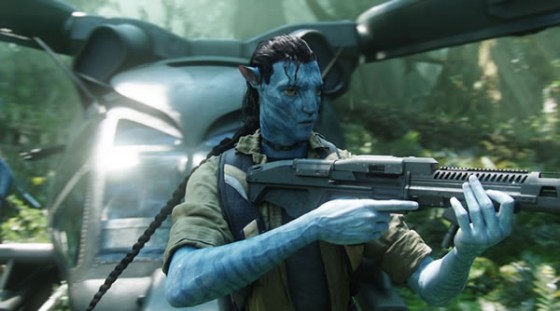 The Extended Collector’s Edition Blu-ray also has even more bonus material and interactive viewing. Through the unparalleled, interactive technology of Blu-ray, fans can dive further into the world of the Na’vi and experience the film from behind the scenes. Leveraging the interactivity of Blu-ray, viewers can experience the whole film in three stages of production: Performance Capture, Template — which was the 1990s video game version — and Final as well as a composite of all stages in “Pandora’s Box.” This is supported with interviews with Jim Cameron and the filmmakers and serves as a “master class” on the making of the movie.

For BD-Live options via Blu-ray, new bonus features can be accessed on your original Avatar Blu-ray via BD-Live right away. Nothing has been done on this level for a title of this size before, so it’s extremely exciting and shows off the technology of Blu-ray in its best light.

With access to a BD-Live player with a network connection, once you insert your disc into the player a LIVE EXTRAS option will appear in the main menu. By selecting this, new content will quickly download, allowing you to access preview video clips from the forthcoming Avatar: Collector’s Edition Blu-ray. Videos, including deleted scenes and screen tests, are being rolled out now until the Extended Collector’s Edition release on November 16th, so be sure to check it all out!

You can purchase the Blu-ray or DVD set at Fox’s website for $54.99 and $34.98  respectively. You can also purchase the extended edition at Amazon.com. For a chance of winning your very on DVD copy of Avatar: Extended Collector’s Edition, simply answer the following question and follow us on Twitter with your answer.  How many minutes of deleted scenes are there in Avatar: Extended Collector’s Edition?