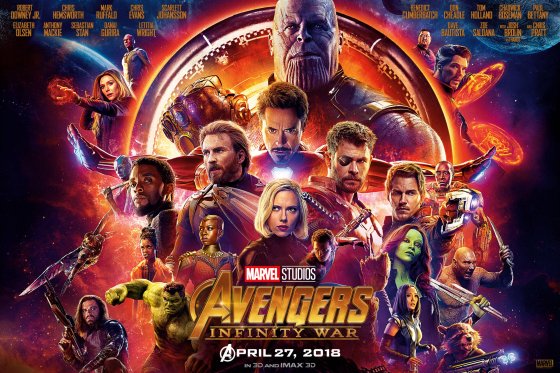 Just before their leap into the Marvel universe, Avengers: Infinity War directors Joe and Anthony Russo were executive producers (and frequent directors) of the NBC show “Community,” with one episode showing the results of a character rolling a six-sided die. The episode examined all possible outcomes of that roll, ranging from the innocuous to the utterly disastrous, the latter of which was dubbed “The Darkest Timeline.” In the alternate reality of The Darkest Timeline, characters were killed or severely injured, then put on a crash course with their prime timeline selves. 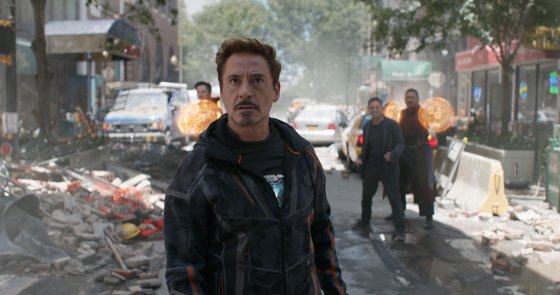 Up until now, we’ve only seen the lighter side of the Marvel Cinematic Universe (MCU), with hints of severe ugliness and brutality in each film. Avengers: Infinity War – the first part of a two-part story – skews decidedly and unapologetically into its own version of The Darkest Timeline, without even so much as a hilarious post-credits scene to let you off the hook. Let’s be clear: the last sentence said “hilarious post-credits scene,” not “no post-credits scene” – trust me, you’re going to want to stay in your seats for what awaits you after the credits roll. 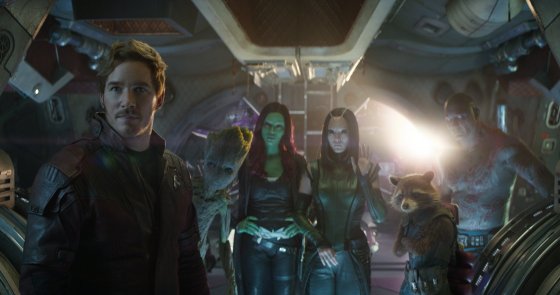 Avengers: Infinity War is such a bold assault on both the MCU characters and its audience, it doesn’t even feature the traditional colorfully-animated closing credits sequence or a crankin’ rock song. Just white lettering over a black background, and a somber score overlaying all of it, leaving you only with your thoughts about what you’ve just witnessed. You’re going to hear a lot of reaction from the audience: crying, frustration, amazement, or dead silence out of awe, with your brain making furious plans to see it again to catch what you missed. 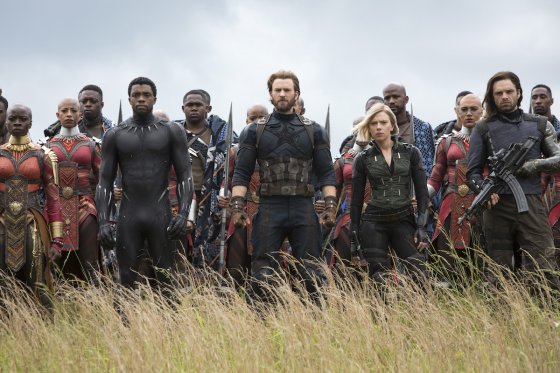 And yes, there is a LOT to miss on the first go-round with this film. With the exception of two characters mentioned specifically by name, every superhero from the last 18 MCU entries appears in this film, which automatically means your attention will be absolutely out the window. Well, “out the window” may be too light a term for it.

Instead, your attention will be put through a taffy-pulling machine, six bounce-houses full of screaming children, a cross-cut office shredder, and finally an industrial meat grinder before getting slammed onto a flat-top griddle and fried until well-done. Yet, no matter how we’re bounded through this film, or how many characters we’re expected to keep up with, the film follows no stray plot threads and sticks with one plot only: the fight against Thanos (Josh Brolin) and his quest to acquire all six Infinity Stones. 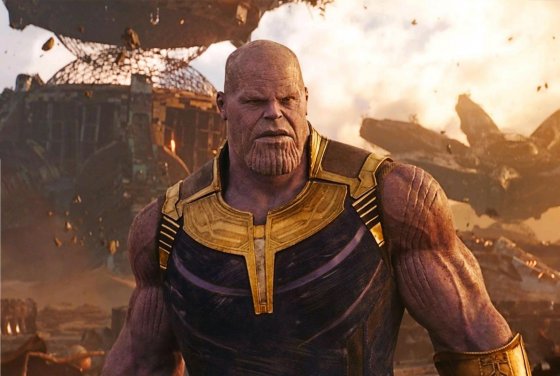 Thanos, as he has done on every planet he’s conquered, wants to save the universe by destroying half its population. Instead of going planet by planet, he can do it all with a snap of his fingers once he’s got these six Gems. Overcrowding, lack of resources, hunger and poverty – it’ll all be a distant memory once he’s done with his plan. And he’s nigh unstoppable; between his growing powers and his Children – Proxima Midnight (Carrie Coon), Ebony Maw (Tom Vaughan-Lawlor), Corvus Glaive (Michael James Shaw), and Cull Obsidian (Terry Notary) – there’s no one and nothing that can stand in their destructive path. 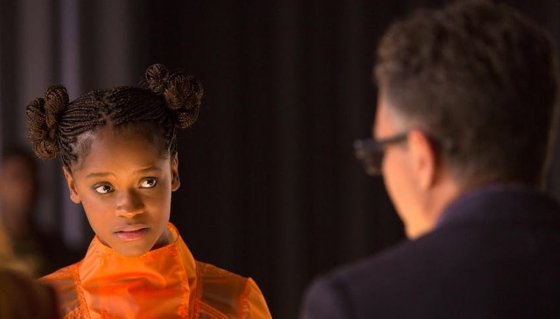 It’s a path carved in blood by blind faith; the eerie, cult-like mannerisms of Ebony Maw speak of a mind so bent, he’s literally praising his victims for their pending deaths meaning much more in the grander scheme. Thanos and his Children truly believe they’re being benevolent, that this is the only way to save everyone from themselves, making the hard choices for people who cannot. It’s pretty much what drove Ultron (James Spader) in Avengers: Age of Ultron and Kaecilius (Mads Mikkelsen) in Doctor Strange, wanting to save humanity by destroying it; this is just on a much grander, cataclysmic scale. 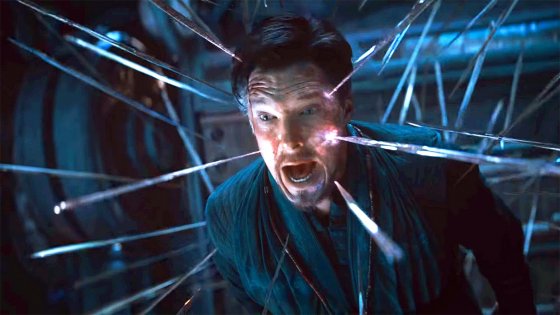 Every previous Marvel movie – the 2011 and 2015 Avengers films included – was just a prologue to Avengers: Infinity War. All the origin stories, character development – if you want any of that, you’re going to have to catch up before you see this. Avengers: Infinity War expects you to know everything about everyone as it starts off at a million miles per hour and doesn’t so much as stop to take a breath. Even when it does put things on pause to attempt to take a breath, it’s immediately taken away by something unexpected or horrible occurring.

(If you don’t have time to go through all of the MCU, just cram as much as you can of Phase Three – Captain America: Civil War, Doctor Strange, Guardians of the Galaxy Vol. 2, Spider-Man: Homecoming, Thor: Ragnarok, and Black Panther –before going to see Avengers: Infinity War. Thanos’ appearances in the post-credits scenes of both 2011 and 2015 Avengers films may not be necessary viewing, but provide a little foreboding context.) 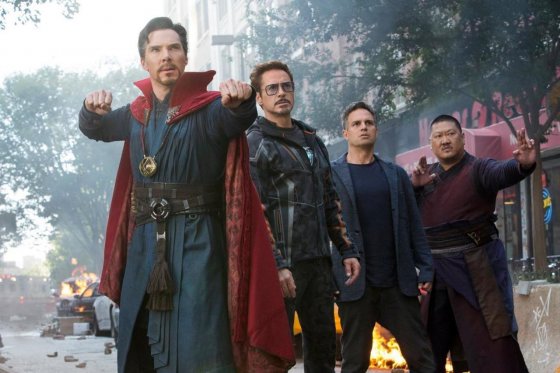 As mentioned before, the script mercifully sticks to one plotline, which gives Thanos – and Josh Brolin’s challenging performance – room to shine. Brolin instills a sadness-driven valiance into his single-minded, genocidal purpose. He’s a guy who sees the glass as neither half-full or half-empty as any normal person would; he sees it as possibly not being able to be filled again, and he’s making sure it gets filled, even it if means the deaths of billions. Avengers: Infinity War belongs to Brolin and Thanos, as we’re well familiar with everyone else. 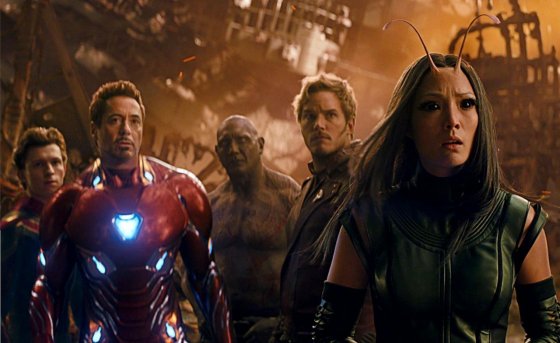 If you’ve seen the previous Marvel films, you know how all the actors have defined their roles; nothing has changed. Of course, you’re all going to be looking forward to seeing how the Guardians of the Galaxy fit into the Avengers world, especially where alpha males Thor (Chris Hemsworth) and Tony Stark/Iron Man (Robert Downey Jr.) are concerned. Almost immediately, the testo-fest begins, with how much pressure Peter Quill/Star-Lord (Chris Pratt) has to put on himself in order to stack up against these titans, and it’s alternatively hilarious and awkward how the line between plain masculinity and toxic masculinity gets trampled on and straddled. Gigantic praise should be afforded to the Russo Brothers for taking all of these disparate heroes and mixing them together coherently and cohesively, never losing each character’s tone or flavor.

This little bit of mirth is all the good times Avengers: Infinity War will allow, though. (Well, this and maybe a sneeze-and-you’ll-miss-it reference to Guy Ritchie’s Snatch. And maybe the appearance of a very recognizable, fan-favorite actor who’s spent too much time looking up at people; here, he finally gets the chance to look down on them.) A fight for the universe is starting, and the chilling pre-title events set the tone for what’s to be heralded as the most serious film of the MCU. This is the MCU’s larger-picture version of The Empire Strikes Back, a film where things go absolutely sideways and darkness falls over what was once a fun place to hang. It’s a film which tries so hard to plaster every bit of its spirit on the screen, and it has the balls to take the MCU into places where it’s never been before. But if all the film does is put us through an emotional roller-coaster before possibly walking it all back – what’s the point?

MPAA rating: PG-13 for intense sequences of sci-fi violence and action throughout, language and some crude references.
Post-credits scene: only one (after the closing credits).
Running time: 149 minutes.
Released by Walt Disney Studios Motion Pictures.

Part one of Marvel's Phase Three-ending "Avengers: Infinity War" films is a high-flying, jam-packed testo-fest eschewing the usual Marvel brio for steep consequences, but does it really matter if it’s all gonna get walked back?