This would be classified as an "Awesome Gift Idea"

Christmas is right around the corner again. If you’re anything like us, you’ve been wondering just what in the hell you should buy for all of the people in your close circle of family and friends. Your male friends probably don’t expect anything more special than a handshake and a year’s subscription to Naked Skanks and Firearms Quarterly. Simple enough, right?

But what about everyone else? What do 14-year-old kids like these days? What about 56-year-old women? What in God’s name do you buy for your girlfriend’s smoking hot sister that won’t get you dumped or beaten up?

Not to worry, fellas. We’ve got this year covered for you.

10
Neuticles
Nothing says “I love you” like prosthetic dog balls

No, we’re not kidding. There are things called Neuticles, which are actually replacement canine testes. The general idea is that you get them so your recently clipped dog doesn’t try to kill himself once he realizes the horrible thing you’ve done to his manhood. 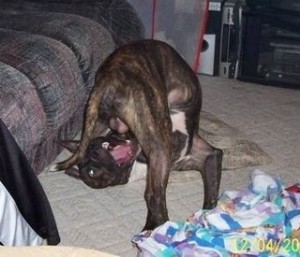 While it might not seem that weird to keep Fido’s coin purse heavy and all a-swinging with some faux-nuts, keep in mind that these things are actually for individual sale. That is, you don’t have to actually implant a pair in your dog.

You can buy a couple dozen to toss at people in the mall, create an interesting motif at the dinner table or “accidentally” discover in your Baja Chalupa just to fuck with the poor girl working the Taco Bell counter.

How does any of this relate to Christmas? Well, aside from being for sale with no questions asked, they also come set with sterling silver hooks. Why, you ask? 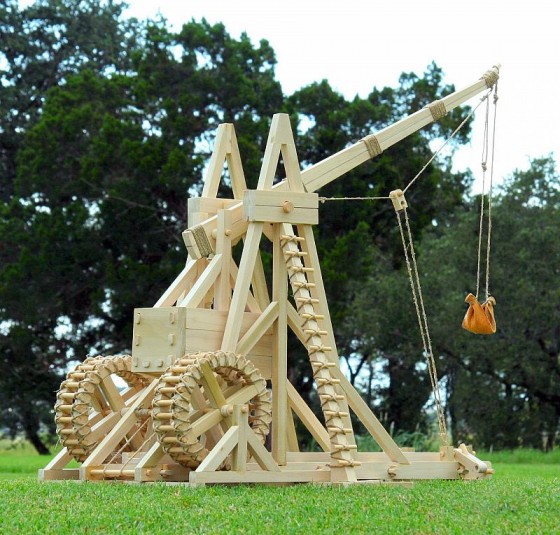 For those of you who aren’t history buffs or pasty, cottage-cheese-assed LARPers, a trebuchet is what’s known as a “siege engine.” Similar to a catapult in purpose, they’re about a thousand times more badass in that, instead of being a giant weighted see-saw, they fling ammunition great distances using the principles of centripetal force.

Now, a full-sized trebuchet is definitely an unhandy thing to have around. Regardless of who you buy it for, there’s almost certainly going to be trouble when they launch the neighbor’s Yorkie into the next area code. Luckily, there are build kits for desktop trebuchets in dimensions as small as 11 inches tall, allowing the builder to sling flash drives or flaming rubber band balls stuffed with thumb tacks all the way across the office.

RFID technology is a wondrous, slightly terrifying advance in science. On the one hand, it helps to cut down on shoplifting and track sales of certain items. On the other, it’s probably the tip of the burning-in-hell-for-all-eternity iceberg. 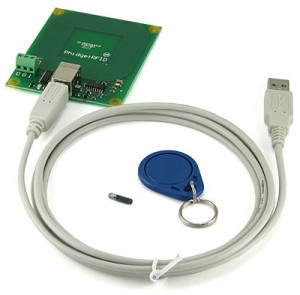 RFID tags, in case you didn’t know, are those little plastic thingies inside CDs, DVDs and video game cases that prevent people from just walking out of Wal-Mart with a dozen copies of Twilight crammed into their pants. Those tall gray things you walk through when exiting are the scanners, and they’re what sets off the alarm message when an active tag passes between them.

Rather than going rogue and living off the grid, you can instead learn to embrace RFID technology and use it to your advantage. Some devious types have even figured out how to stalk people using such gadgets. Not that we’d recommend it, you understand. This particular kit comes with instructions on how to set up an RFID Windows XP login, an RFID door lock, even an RFID employee time clock to mark the exact moment when your disgruntled mailroom worker came in and started shooting up the place and screaming about Jesus and the Apocalypse.

There’s really no limit to human creativity. Think about it: if you had, say, a week to devise and execute an awesome idea for a handmade gift using only things found outside, what could you come up with? A canvas of artfully arranged broken glass and twigs? Something carved out of driftwood? A used-diaper pillow?

How about a necklace made from an animal that was recently peeled up off the side of a highway? 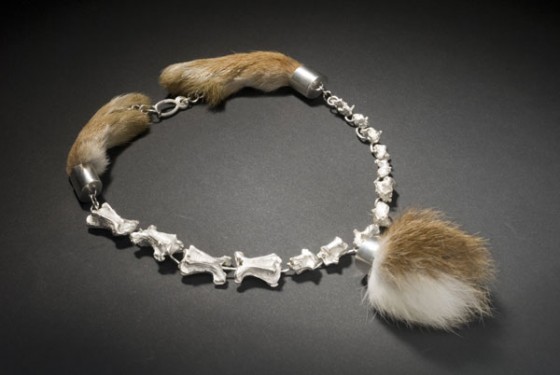 That’s exactly what Canadian artist Elaine Ho does. It doesn’t matter if it’s a raccoon, a deer, or half a tabby cat. If it’s dead, she’ll make something pretty out of it.

So if you have an animal lover to give a gift to this Christmas (or an insufferable hippy asshole you just really don’t like), why not give the gift of roadkill couture?

It’s the perfect choice for people who love both animals and looking tacky.

6
DIY Taxidermy Kit
The closest thing to the real thing, except with more crying

In keeping with the dead animal theme for a moment, we have to pose a question to you. Well, actually it’s more of a reader poll.

You find the idea of preserving beloved pets: 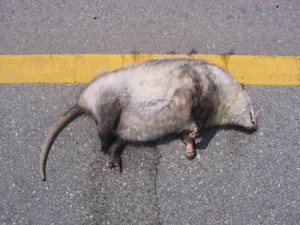 a) Pretty Goddamned Creepy
b) Not that Creepy
c) Pets? Why not Mother?

If you answered B or C, we’ve got a suggestion you just might find appealing. Although, if you answered C, you probably won’t benefit from anything we can do for you here.

This do-it-yourself taxidermy kit presents two viable gifting options. The first is pretty straightforward: just give the whole shebang to whichever friend or relative will think it’s the least disgusting. The second option, obviously, is to preserve their recently deceased cat or massive eight-point buck for posterity and then give that to them. It kind of goes without saying that there will be scheduling issues with the pet angle, unless you and your Durango want to do the dirty work a few days prior to Christmas.

In the age of Two Girls, One Cup and Kanye West’s mind-bogglingly retarded blog, there’s not a hell of a lot left on the internet that bothers us.

With the possible exception of Crocs or skinny jeans on fat girls, there isn’t much in the way of fashion that’s particularly bothersome either. We’re just too jaded. Or so we thought about ten minutes ago.

Enter the JewelEye. While it’s all well and good to write lame-ass poems about sparkling eyes, we’ve never really thought of that as something so desirable that we should physically alter our eyeballs themselves. Well, it so happens that certain Dutch surgeons disagree with us.

Colored contacts are so 1996. These days, the way to really catch someone’s attention is by having small bits of gemstones or precious metals inserted under the conjunctiva, otherwise known as that thin membrane over the surface of your eye that exists solely to protect it from small rocks and shards of metal. It’s the perfect gift for that man or woman who just isn’t happy with their lip tattoo and nipple rings.

We know what you’re thinking: Sweet Jesus, in the fucking eyeball A Gatling gun? Isn’t that incredibly dangerous?

Well, yes, it is. That’s why you’re not going to buy it for your 6-year-old nephew who thinks the color green is hilarious. You’d buy it for someone who would treat it with the reverence it deserves, like your senile great-uncle or your psychopathic half-brother.

Aside from the inherent dangers of automatic weapons that shoot rounds the size of small cigars, Gatling guns are amazingly safe contraptions. They’re huge, heavy, and require actual physical labor to use.

It’s not as if it will accidentally discharge if you drop it, is basically what we’re saying.

Not only are they safe, incredibly cool and surprisingly inexpensive, Gatling guns are also completely legal. Since they’re hand-cranked, they’re not classified as automatic weapons.

In that respect, Gunaxin writers aren’t classified as automatic weapons either.

For every young man, there comes a time to put away childish things. All those Bebob and Rocksteady fully poseable action figures from the early years that you sadly had to give away to charity. The Wolverine with retractable claws that might be worth thirty grand today…lost in a move? Passed on to a younger sibling? Who knows?

Edited for boobs and plastic vajayjay

Fact is, every guy has fond memories of silly plastic things from their childhood they wish they could have back. Now, you can pass on the joys of action figures to someone who might appreciate them almost as much as you did. Of course, that person should be over the age of consent in your state to avoid a potentially embarrassing situation.

There’s Jasmine St. Claire, the centerfold in probably three dozen Penthouse issues of old. And of course, Jenna Jameson. Really though, to get an up-to-date Jenna lookalike, you’d probably do just as well to buy an old football.

2
Wifi T-Shirt
The ladies will be ALL OVER you in this…never mind.

For the massive, helplessly lost nerd in your life, there’s…shit, we’re not sure. A World of Warcraft expansion pack? A hooker and some anti-bacterial face scrub?

We don’t know. What we do know, on the other hand,is that practically everyone utilizes wifi technology in their daily lives. For those people, they either pay for t

heir own broadband or leech off the neighbors’. But what about the mobile hacker/wifi hog? How can they tell exactly where to park mom’s van to commence their DVD torrents? It’s a dangerous pain in the ass to try to cruise the streets and keep an eye on their laptop’s signal.

1
Push-Button Bra
You know what? We don’t even have a joke to make here

Seriously, we couldn’t come up with a single funny thing to say about this wonderful invention that wouldn’t besmirch the sheer awesomeness it represents. It’s not often that something comes along that is so brilliant, so world-changing and life-affirming that we are literally struck dumb, but this is definitely one of those times. Just take a look at this video:

Forgetting for the moment the massive balls you’ll need to enable you to give that to your lady love, think about how much life will change for the better. Literally any situation can be improved by the simple push of a button. If you’re walking through the mall with your slightly flat-chested girlfriend and happen to spot your highly endowed ex, just turn around and jab your girl in the chest. Voila! Instant rack. We don’t know what else to say here except “God Bless You, China.”