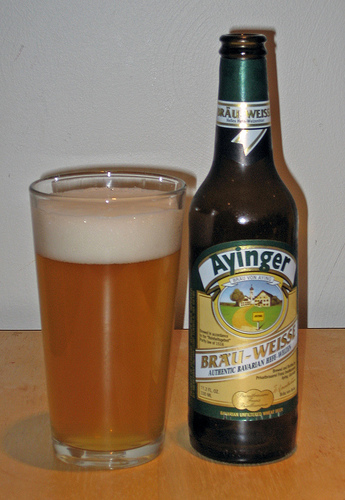 Information: Site – “Smell and taste of yeasty wheat beers are characterized by a fine top-fermented yeasty fragrance and a unmistakable distinctive, accurate banana aroma. In Antrunk it is full-bodied, very soft and mild with a rich, champagne-like recency.  A light, typical wheat beer taste is expressed, the bitterness is hardly noticeable. The sparkling refreshing Ayinger Bräu-Weisse wheat beer will impress any connoisseur the start.”

Definition of a Hefe-Weizen: Wheat beer is a beer that is brewed with a large proportion of wheat. Wheat beers often also contain a significant proportion of malted barley. Wheat beers are usually top-fermented (as required by law in Germany The flavor of wheat beers varies considerably, depending upon the specific style..) The main varieties are weissbier, witbier, and the sour varieties, such as lambic.

I sadly don’t often tackle foreign beers. And I sadly don’t have a very good reason for it. Naughty. The real problem here is that beer, such as it is, began its existence -also such as it is- in areas in Europe, specifically Germany. In fact, the recipes used to create what many of us associate with beer were created -and even made law- in Germany. It’s the epicenter for what was to become the various and sundry branches of beer in the first place.  So, with that in mind, here is one of my first forays into German beers: a classic Hefe-Weizen.

The pour yields a warm yellow brew with a slowly receding head that began craggy and lofty, but dies off into practically nothing. The nose is grassy, and of course full of a great deal of wheatiness. There are notes of deep citrus and even a bit of hidden vanilla and golden, wine-like raisins. The flavors begin bright and tart and full of grassiness with a cheeky tang of lemon, then plateaus into a light, crisp, banana-like cloying mouthfeel. However, it finishes rather abruptly without a low note to tie all the flavors and tastes together. This is certainly a tasty brew, and the classic German craftsmanship can be tasted through and through. Very nice and something this tart and banana-ish should be paired with a citrus-grilled salmon or even a honey glazed ham.