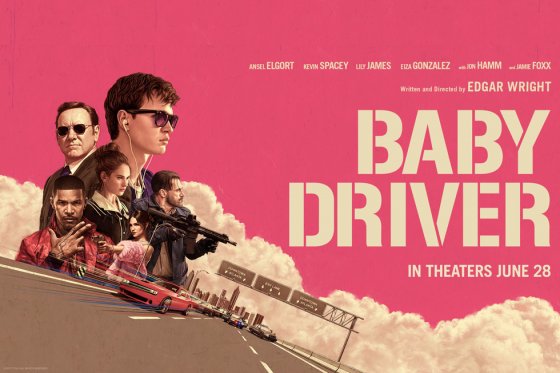 Full disclosure: We’re unabashed fans of Edgar Wright. All of Wright’s works have played straight to our geek hearts, beginning with Shaun of the Dead and “Spaced.” We quickly grew to love the way he used cinematic staples to help tell his own stories, a trilogy of which he co-wrote with Simon Pegg. Before The World’s End – the final film of The Cornetto Trilogy – was released, Wright directed Scott Pilgrim vs. The World, an adaptation of a comic book series which played straight into his DJ-like skill set, being a mashup of different genres and emotions. 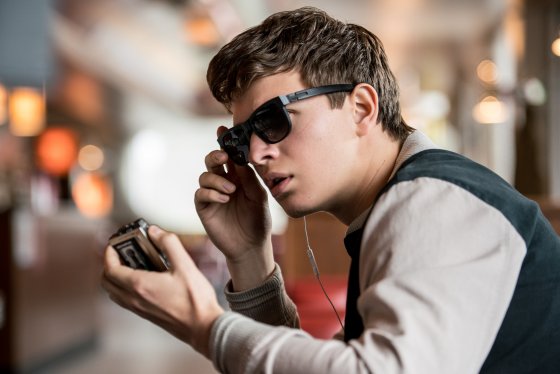 With Wright’s eclectic filmography built of pastiche, parody, and cinematic homage, we wondered how Wright would make a more straight-ahead film without the trappings of whatever genre he chooses to send up. He has answered in his inimitable style with Baby Driver, a grand tip of the cap to car chase and crime films of yesteryear while injecting his modern-day sensibilities, mixing together to make something fresh and nostalgic all at the same time. 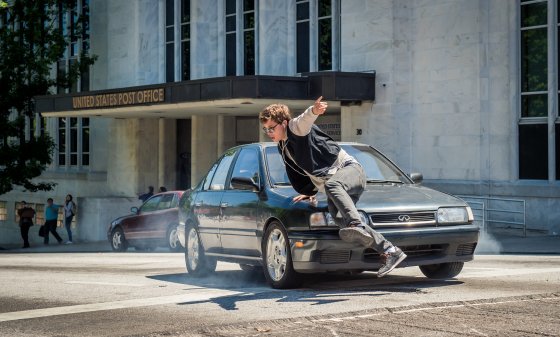 One of the touches Wright gives to what could have been a straightforward getaway driver-type movie is that he sets up one very simple conceit which redefines this film as unmistakably his: Baby (Ansel Elgort), the hero of the film, deals with his tinnitus by drowning it out with music. He spends every waking minute with tunes pumping through his iPod, making music at his home workstation, or spinning vinyl in the apartment he shares with his deaf childhood caretaker Joseph (CJ Jones).

All of Wright’s previous films have had at least one sequence set to non-score music. Shaun of the Dead highlighted a zombie beatdown accentuating the rhythms of Queen’s “Don’t Stop Me Now”; Hot Fuzz featured its lead character running in time to “Village Green Preservation Society” by The Kinks; The World’s End showed the Golden Mile’s participants taking guarded steps along with “Alabama Song (Whisky Bar)” by The Doors. Scott Pilgrim vs. The World is chock-full of these moments, considering the titular character plays in a band, but there’s more to it than that. 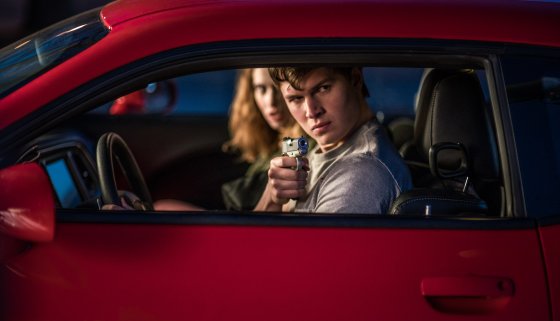 It’s not merely setting a film to music; it’s more that Wright has dedicated the film to it through Baby Driver’s editing, little (and large) bits of on-screen actions, and the thrilling car chase choreography. He even gets the set decoration in on the fun by having music lyrics show up as graffiti or signage during one long Steadicam shot at the beginning of the film. Make no mistake – Wright has crafted a modern-day musical, but with cars pirouetting and bullets flying instead of dancers in pointe shoes. 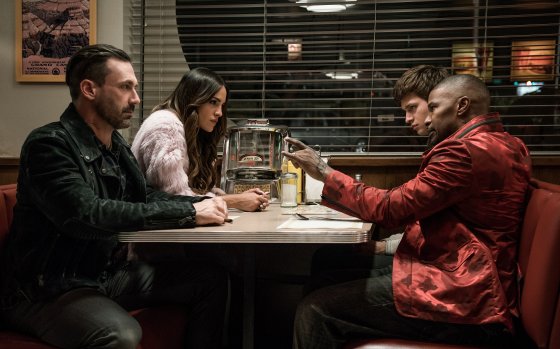 He has made the music just as much of a character as any human in the film; conversely, the music is also what gives the film its character. At the center of it is Baby, the driver for the omniscient and omnipresent crime lord Doc (Kevin Spacey), who’s got his fingers and toes stuck in seemingly everything from petty crime on up. 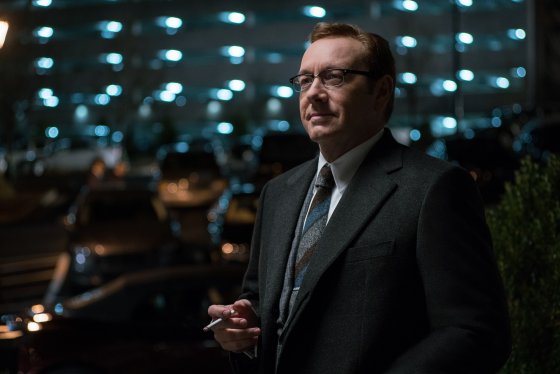 Think of Doc as Keyser Söze-lite: he’s got a sense of humor, he knows who to employ to get the job done, and he only has to toss off a lightly-threatening quip about what he knows about you in order to get you twisted around his finger. But he also rarely works with the same people for very long, and the only reason Baby is still alive and working as a wheel man for Doc’s robbery squads is because he has stolen from Doc. He’s not a nasty guy, but he’ll do anything necessary to resolve any situation, including murder. 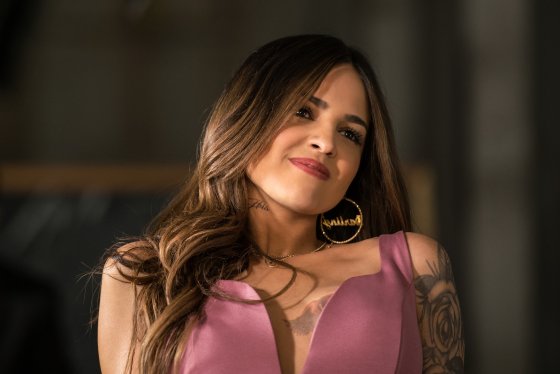 The robbers Baby carts around vary in archetype from the hilariously dumb (an exchange about Michael Myers masks is one of the film’s most laugh-worthy moments) to the vengefully insane (Jamie Foxx’s Bats is hellbent on taking – life, money, whatever he can – because he can) to the guy with a dark secret (which gets inverted with Jon Hamm’s Buddy) to the sexy wild card (which Eiza González plays to the hilt). 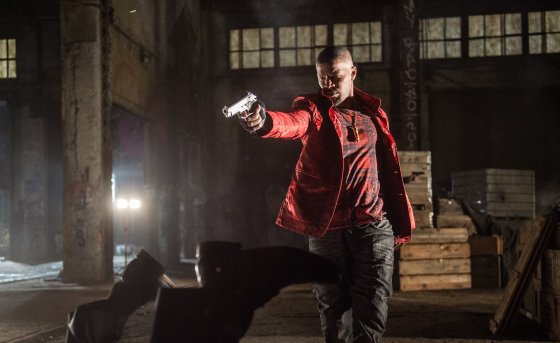 They’re revealed to be anything but typical or stock characters over the course of their jobs together, and the introduction of Bats changes Doc and his crew irreversibly and suddenly with all the grace and finesse of a vicious dogfight. Bats is both a knife blade and the sharpening stone; no one can keep up with his kind of laser-focused lunacy, and those who try have a hard time hiding their displeasure, especially Baby himself. 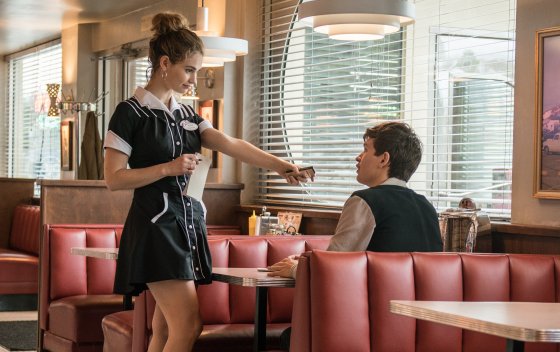 It gets more harrowing for Baby as he keeps the likes of Doc and Bats away from his romance with the lovely waitress Debora (Lily James). She’s beautiful, smart, and sings songs evocative of Baby’s childhood memories; she’s as apple pie-innocent as they come, a mighty reversal from the unsavory characters he allows into his passenger seats. Likewise, Baby’s not a bad guy; he’s a sweet-hearted geek, in point of fact, but he’s a hell of a gift behind the steering wheel and damn if Doc’s going to let that kind of asset slip from his grasp. 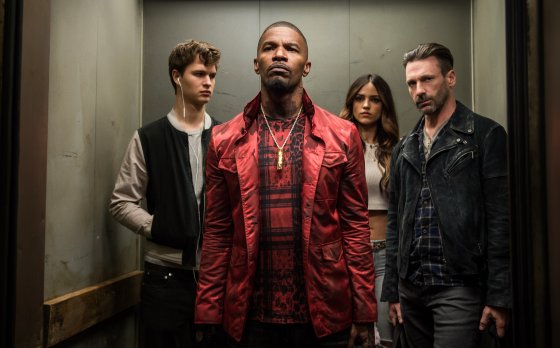 We’re treated to car smash-ups and guns blazing, rooted firmly in Baby’s fight for ownership of his life as Wright weaves his usual cinematic spell around us. It’d be all too easy to bog the film down with exposition dialogue, especially in the case of Baby’s history, but we’re shown more than told why Baby is who he is and why he does what he does. This is Wright’s way of extending his hand to you and asking you to come along on the journey he’s laid out, involving the audience instead of holding them at arm’s length with talking a scene away. 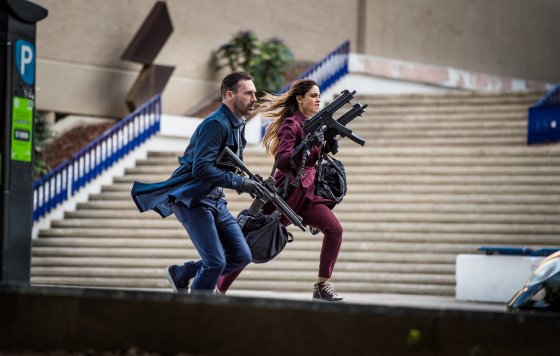 In a total shift from his previous efforts, there isn’t one meta reference to pop culture; even the music is talked about as a product of its time and place, not in a hip discussion about its impact on the world. This is Wright at his most serious (please note: this does not mean a lack of whimsy), with real-world high stakes which give out fat payoffs, whether it’s a breathtaking stunt, a devastating double-cross, or a potential future for Baby and Debora. 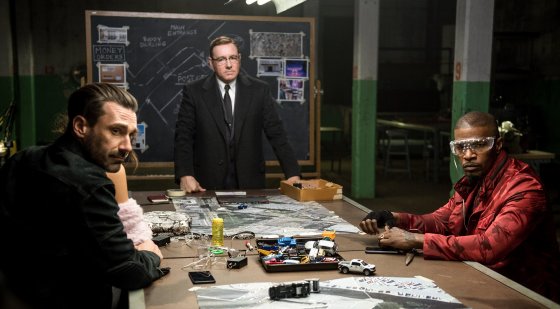 Like the Cornetto Trilogy before this, Baby Driver is steeped in car chase lore from films of years past, lovingly given an update without the aid of overdone special effects. And Edgar Wright makes it as indelible and memorable as you’d expect him to with rich characters, fascinating stuntwork, and fast and fluid car chases. It’s a flavor only Wright can bring you, and boy, does he bring it.

Baby Driver is as indelible and memorable as you’d expect an Edgar Wright film to be, replete with rich characters, fascinating stuntwork, and fast and fluid car chases.