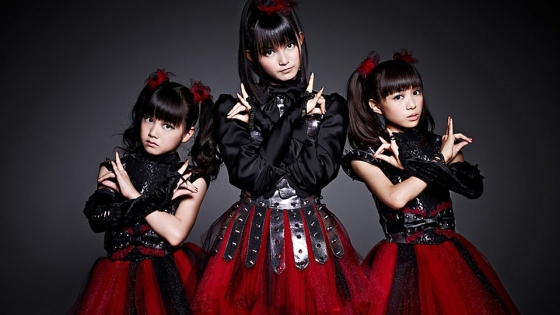 Sometimes it’s true that the United States (that’s us, kids) can be a little slow onto the scene when it comes to music from other countries. In this case, we speak specifically of Japan, the country that consistently gives us tentacle porn, Hello Kitty, and octopus donuts on a stick. Japan is like our slightly younger weird little brother who seems to be into way more awesome things than we are. In this case, however, Japan’s musical export has taken fifty percent their own influence and merged it with fifty percent blistering Metal from America. That’s right, it’s one hundred percent BabyMetal. 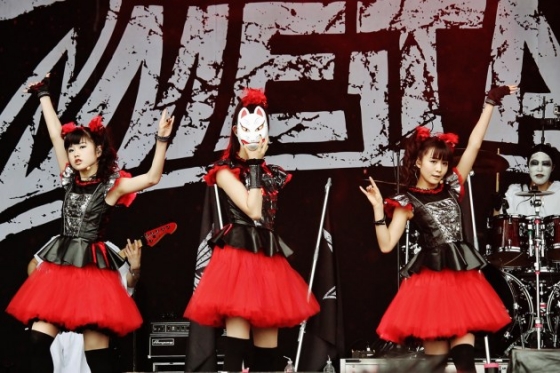 So who and what is Babymetal? Well, first it helps to know who is in the band. Though the touring line-up for the actual musicians varies by location, the girls that rock front and center are always Suzuka Nakamoto as “Su-metal”, Yui Mizuno as “Yuimetal”, and Moa Kikuchi as “Moametal”. Three Japanese girls who each began her career as a performer and model in other, different bands and iterations. Yeah, that’s right: they’re young, seemingly quite innocent, little girls who sing almost exclusively in Japanese. Okay, little might be stretching it a bit as they are all teenagers. But the point is they are a force in the Heavy Metal world and they know exactly what they’re doing for their fans.

It’s not at all hard to describe Babymetal, in fact, it’s about as basic an idea as they come. Imagine early Metallica (a band cited by the girls as a major influence) fronted not by James Hetfield, but by three, high-pitched young ladies with extensive Pop-style backgrounds, and there you have it: Babymetal.

Supported by the likes of Rob Halford, DragonForce, Red Hot Chili Peppers, and even Metallica, Babymetal has quickly become a force to be reckoned with in the Metal music community. Sure, some dyed-in-the-wool Metal-Heads will tell you that Babymetal has pissed on what it is to be all things Metal, but we think you’ll find them far more accessible and, often times, far easier to listen to. For now, in their mid and late teens, the girls are atop their game and look to be sticking around for a long time.