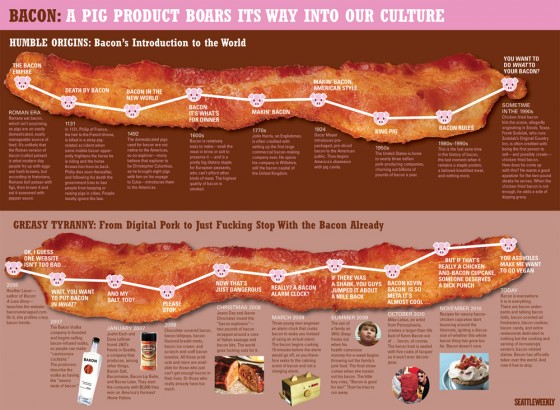 Yeah, see what I did there with the title? Yeah, that’s called a pun. Puns are stupid and incredibly irritating, but I felt I had to do it this time to illustrate a point. That point being that bacon has become so all-consuming and ever-present in nearly every meal that it’s almost become either a self-mocking joke, or a new condiment all together.

Oh, and before we move too much further into this little diatribe, let me just inform all of you that this article is going to feature many, many uses of the word ‘bacon’. Likely enough so to actually raise your cholesterol. So, if you’re a vegetarian or something, it might be in your best interest to stop reading right here. You have been sufficiently warned.

There I was (as I set the scene), watching some kind of mindless nonsense sometime late one Saturday, sipping what might have been my fourth or fourteenth beer (who can tell, really), when suddenly I see a commercial that quickly snapped me back into a temporary sense of sobriety. I was dumbfounded. Could this really be a thing? Was the beer literally going to my head? Was I still even conscious? As I watched on, it occurred to me that this thing was not only real, but also quite possibly the beginning of the end of all things rational on this planet.

The ad was for the BACON BOWL. Now I’m going to assume, just for a second, that you’ve seen this thing in all its over-indulgent glory. It’s literally a thing that turns your bacon into a piece of tablewear. Yes sir, kids, now you, too, can mold your slabbed swine into something in which you can actually serve (hold onto your hats) more fucking bacon. Wow. Even now as I write this I can feel my arteries harden into soda straws.

It was then, dear readers, that things really began to make sense. Bacon had more than just a tenuous grasp on our diets. It had a strangling grip on our very lives and how we perceive food. Sit back for a second and really think about it. Go on, I can wait. Think about how literally eight out of ten things you can either buy, make, or order off a menu include some kind of bacon therein.

Yeah, see? I told you! Bacon has you by the soul, folks! It wants to own you and everyone you love! But oh, Stew, you are a fucking idiot because I am one of those vegan/veggie-munching/algae eaters! A ha! I say to you. You are also wrong! Go out and scan the freezer section where you can get your quinoa/potpourri/swamp grass burgers and you’re just as likely to see “Bacon Flavored” and/or “Now With More Bacony Goodness”. Why? Because even non-meat eaters want to taste bacon! Sorry, friends, but it’s everywhere. 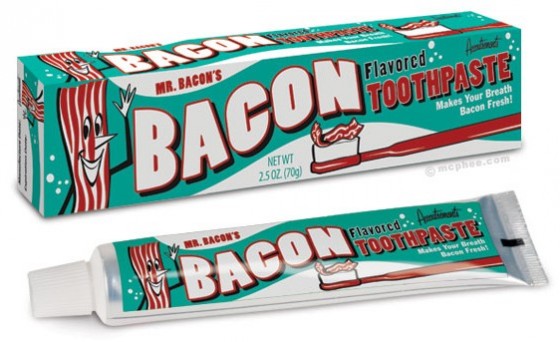 For one night, as you watch your favorite shows, pay a little closer attention to some of the food commercials that loudly inundate the stations. Just for one night, I promise you it’ll be a nice lesson on just how bacon has infiltrated society and everything we eat. You might not realize it now, but after an evening of commercial watching, it’ll become all too clear.

Applebees, Chili’s, Burger King, Outback, Hardee’s, Logan’s, McDonald’s… you name it, the chances are better than good that something new is arriving on their collective menus that will feature bacon as either crumbled, slabbed, stirred into a sauce, layered under melted cheese, mixed into ground beast, or accompanying the meal in some other cleverly hidden way. Or sometimes it’s not hidden at all; the bacon is just right there, in a pile, or stacked into a thatched hut, or arranged into a bungalo. It really doesn’t matter, just as long as it’s all bacon all damn day. 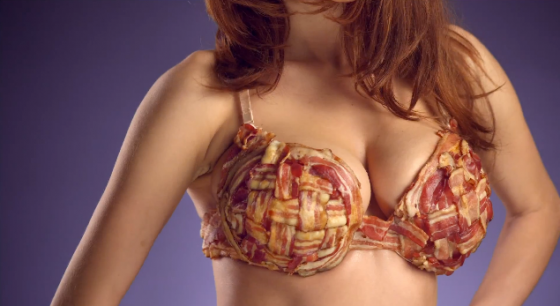 I know you’re probably muttering to yourselves under your angered breath that this guy -meaning me- is some kind of Nazi Communist Traitor for bad-mouthing bacon and all its delicious yumminess. Calm down, ya nuts. I enjoy bacon just like all you other Red-Blooded American Meat Eaters. In fact, just the other day, on a whim, I wrapped a slice around a chocolate chip cookie at work and gleefully consumed it with relish. Not actual relish, that’d be disgusting. And it was damn fine indeed.

However, as I weakly digress, I do not need bacon in, on, or around everything I make. I’m a chef, I definitely know how to cook, and I do not feel the wanton desire to simply shoehorn bacon into everything I create. Why? Because it would likely kill me… or at the very least rapidly add back on that twenty pounds I’ve recently shed. Maybe that’s where it gets its name: Back-On. Bacon. It puts it all Bac-On. It can’t be a coincidence. Can it?

So, other than the obvious breakfast treat and hamburger partner, what other plans do I have for bacon to completely finish its take-over of American humanity as we know it? Well, it definitely began with the bowl, as I said earlier. But it can, and will, get infinitely more ridiculous. Here’s what I’ve gotten so far… ya know, because folks are so willing to give up their lifestyles to the false idol that is the Pig Belly. Check it out:

Bacon Pocket Squares : Nothing says passing the day in the office like a neatly tucked square of bacon in your dress shirt pocket. Plus, it’ll earn you big points with the boss while you compare grease stains.

Bacon Envelopes : Snail mail is on its last leg, as we all know, but there’s still room in this world to convert all boring and tasteless envelopes into tasty bacon. Imagine getting junk mail or Final Notice bills inside yummy bacon? Your day wouldn’t be so bad after all.

Bacon Hats : We already have nacho chip Sombreros, this only seems like the next logical choice. Imagine the smells wafting around during hot baseball games? Yum.

Bacon CDs : Again, a dying media. Why not make the discs edible so once you rip them to MP3’s you can just taste your Timberlake and lick your Ludicrous lips?

Bacon Playing Cards : Vegas would never be the same. After one of those Poker tournaments, at least the losers won’t leave totally empty handed. Just eat your beated hand and push from the table with a greasy grin.

Oh I’ve got a hundred of ’em. These are just the tip of an iceberg that could make someone very rich. Believe me when I say bacon isn’t going anywhere, despite what your hog futures predict. People are far too invested in this stuff and its got its claws into us like a parasite. So eat up, or maybe just stick to sunflower seeds. Wait, are those bacon flavored? Gotta go…