The Badass Margaret Thatcher Story No One is Talking About

The lady in the picture up there, the one surrounded by people who look like they’re about to mug the Grim Reaper, is the late former British Prime Minister, Margaret Thatcher and 3 members of the SAS (Special Air Service). Though her recent death has caused many people to discuss her politics, there’s one awesome, frankly badass story people have left out and we couldn’t stand idly by while it went unheard. So here it is.

Now old Maggie earned the shit out of her nickname the Iron Lady, she embodied everything about the British stiff upper lip and stayed calm and collected in the face of everything life threw at her, up to and including flashbang grenades and bullets. Confused?

Well, if you’ve ever played Call of Duty Modern Warfare, you’re probably aware of something known as the “Killing House“, for the uninformed it’s a place where the SAS train how to shoot bad guys in the dick. Here’s a video example.

A little known fact is that the SAS always practice this exercise with live ammunition, because the SAS always do things the hard way. When a high-profile person visits the SAS, it’s customary for that person to be used in an exercise to show off just how disciplined and boss the SAS are, again, live ammunition is always used. It doesn’t matter if the person is just a visiting news crew or the freaking Queen of England, the SAS will flashbang the shit out of them and shoot real, actual bullets right next to their melon. 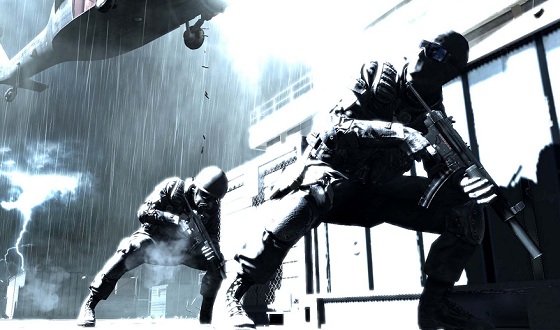 We wanted to use a real picture of the SAS but we were afraid of our servers catching fire.

So, when the Iron Lady entered the Killing House she was treated no differently, she was simply led into a dimly lit room and told to act like a hostage, or in other words, sit really fucking still. However, seeing as she was the leader of Britain at the time, two aides insisted that they accompany her, both of which were again, told to stand still, or not, the SAS liked to make things interesting. So just for a second picture this scenario, there’s a pitch black room, in which is sat a small mousey haired lady flanked by two bodyguards. When 4 black clad gun-toting members of the SAS ran in and shot the place up, what do you think happened?

If you’re answer was, Maggie didn’t flinch while her bodyguard shit a brick and dove for cover, you’d be absolutely right. But here’s the best part. Upon seeing that her bodyguard had tried to morph into a ball like Samus Aran from freaking Super Metroid, she scolded him for embarrassing her.

So, ladies and gentlemen of the internet, you may not agree with Margaret Thatcher’s politics, hell, you may not even care that she’s dead. But come on, after hearing that you have to admit that she was a stone pimp when the chips were down. Surely this is the story we should be telling?