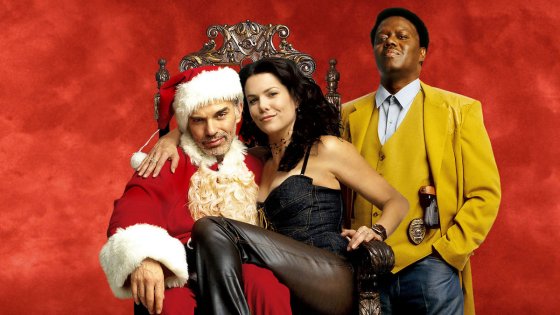 Bah Humbug! Calling the inner scrooge in all of us. Not up for It’s A Wonderful Life? Sick and tired of A Christmas Story? Everyone dreads the consumerism and strained family dynamics of the holidays, which is why satirical anti-Christmas movies are the perfect way to avoid it all. Here are some of the least Christmasy Christmas movies that you can watch over the twelve days of Christmas, or at any other time: 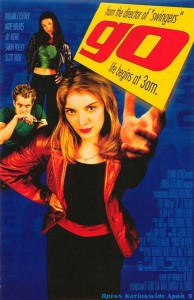 A Christmas Eve dark comedy for those not so much into in the holiday spirit. We see three stories that intertwine in the strangest of ways, drawing comparisons to Pulp Fiction. A broke and desperate checkout-girl encounters two gay soap-opera actors (who it turns out are cheating on each other with the same man) looking to score drugs from her crazy English co-worker. Except he’s off in Vegas getting into trouble at a strip club, so she figures she can make some quick cash in his stead. Only she doesn’t know the actors are simply trying to avoid police charges from an Amway-selling narcotics officer who likes to walk around his house nude. Add in an annoyed drug dealer, a worried best friend, and a rave and you have the basic premise for Go. 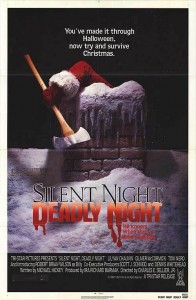 After his parents are murdered by a scalpel-wielding thief in a Santa suit, a young boy is sent to an orphanage. He spends his youth staying quietly to his self, but his mind is further warped by an overly strict Mother Superior. After obtaining a job at a local department store, he’s asked to don the Santa outfit. He stumbles upon two people having sex in the storage room, has flashbacks of his parents’ murder, and snaps. A killing spree ensues where the killer yells “Naughty” and then chops people up with an axe. This movie caused a ton of controversy in the 8os from critics and parents alike. So much so that it was quickly pulled from theaters. And yet, the film managed to spawn four sequels. 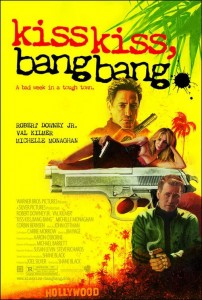 Set during the Christmas season although not overflowing with festive cheer, Robert Downey Jr. plays a petty thief who stumbles into a movie audition after attempting to rob a toy store (and obtain a Christmas present for his nephew). Shuttled out to Los Angeles, he’s reunited with high school crush Michelle Monaghan and a gay private detective played by Val Kilmer. The plot is narrated by Downey and has strong parallels to dime novel detective stories. Violence, swearing, a severed finger, multiple murders, and Michelle Monaghan running around in a cute little Santa outfit all are found in this amusing little gem. 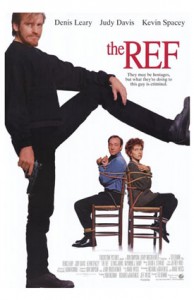 Denis Leary plays an unfortunate cat burglar, who is abandoned by his partner in the middle of a heist, and is forced to take a suburban couple hostage. Unfortunately, he picks the wrong people to take captive, as Kevin Spacey and Judy Davis play a couple on the verge of an acrimonious divorce. As family arrives to celebrate the holiday, Leary masquerades as the couple’s marriage counselor in an effort to conceal his predicament. He gets more than he bargained for when he encounters their blackmailing son and despicable in-laws. Despite the situation, it doesn’t stop the quarreling and resentment from streaming forth. This is the Christmas movie to remind you of dysfunctional families, bickering relatives, and awkward situations. What Christmas isn’t complete without at least one extended shouting match? 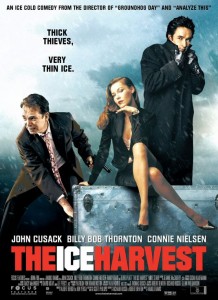 This neo-noir is littered with dark comedy and stars John Cusack as a lonely mob lawyer with Billy Bob Thornton as his devious partner. They decide to stage a Christmas Eve robbery, stealing a suitcase full of cash from local gangsters. The idea is to get out of town, but several complications including a seductive strip-club owner, an alcoholic best friend, the weather, and some back stabbing and double dealing delay the exit. The body count begins to rise as Christmas Eve gets progressively worse and you get to experience a truly awful Christmas Eve dinner. Not everyone is looking forward to this Christmas. 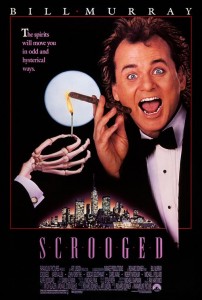 A modern adaptation of the Charles Dickens classic, A Christmas Carol, this 80s version stars Bill Murray as a cynical TV executive Frank Cross. Cross is a mean, cold-blooded, and selfish TV network executive who despises the Christmas season. He even wants to staple antlers onto mice. Nevertheless, he is hungry to pull off a live Christmas special and further his career. Sounds like a good start to any Anti-Christmas movie. Admittedly Cross begins to see the error of his ways, but despite the upbeat ending, Bill Murray brings enough cynicism towards Christmas to crack this lineup. 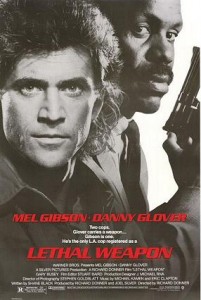 A suicidal Mel Gibson teams up with his mismatched partner and sidekick Danny Glover to kill a whole lot of bad guys. I’ll bet the other Christmas movies don’t feature a topless model listening to Jingle Bell Rock, doing coke, and jumping from the top of an apartment building. Nor do they have a shoot-out in a Christmas tree lot. Christmas plays a reoccurring role in this violent action-packed adventure, not that anyone is in the mood to celebrate it. This is vintage Mel Gibson, when the world actually liked him. 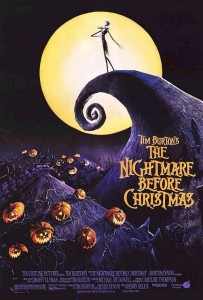 From the dark mind of Tim Burton comes this Gothic stop-motion animated tale of the gruesome folk of Halloween Town. Bored with scaring people, Pumpkin King Jack Skellington stumbles upon Christmas Town and decides to take over the yuletide celebrations by kidnapping Santa. One problem though, Jack’s macabre mindset doesn’t quite mesh with the cheery concept of Christmas. There’s plenty of creepy Christmas reminders in this one: after Santa gets abducted his life is gambled on by a sadistic boogieman, the reindeer are skeletons, and Christmas presents including shrunken heads and snakes. Classic Burton! 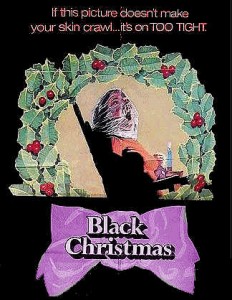 Directed by Bob Clark in his pre-Christmas Story days, this slasher horror flick helped usher in an era of similar type films. This one features a deranged killer who is offing a sorority house full of coeds after making a series of frightening phone calls to them. Could they be coming from inside the house? If you recognize the title, you might have heard or seen the 2006 remake. With its creepy renditions of Christmas favorites like Silent Night, its solemn winter atmosphere, and the chillingly ambiguous ending, Black Christmas is perfect to watch on a cold, quiet December night. 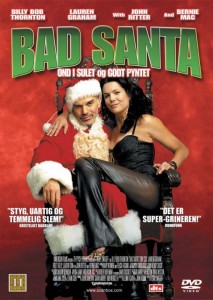 Billy Bob Thornton’s second appearance on this list. In this dark comedy he stars as a conman posing as department store Santa. His plan? Rob the store with the help of his accomplice on Christmas Eve. It’s a scheme the two have successfully executed for years. Things begin to go awry when Thornton befriends a troubled kid and soon after the local security man discovers the plot. On our Anti-Christmas list, Thornton rates as the greatest Santa of all time with his foul-mouth, binge-drinking, and willingness to insult children. He’s a truly despicable character and a dysfunctional loser. Bonus points for the sexy Lauren Graham. 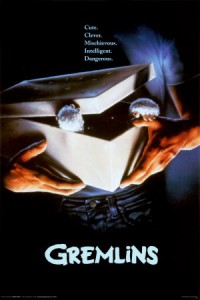 Talk about a gift coming back to bite you in the ass, literally. In this one Billy Peltzer gets the present of a strange creature one Christmas. However, rules aren’t followed and pesky, mischievous monsters soon wreak havoc and overrun the small town. Nothing says Christmas like causing all manners of destruction now does it? They are a couple twisted Christmas moments in this one, like the juxtaposition of the Gremlins hatching in Billy’s house, while his blissfully unaware mother bakes Christmas cookies and hums along to Do You Hear What I Hear? Or Phoebe Cates’ memorable monologue about how she found out there’s no Santa Claus. And this stuff was marketed towards kids. 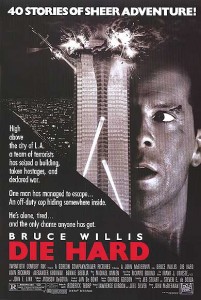 This is what a Christmas movie should be and is the ultimate anti-Christmas Christmas movie. It features Bruce Willis in his breakout action debut as Detective John McClane. Willis visits his wife on Christmas Eve in hopes of rekindling their marriage. Instead he manages to single-handedly kill or maim an entire office building of European terrorists, bomb an entire floor, and ends up saving the day (without shoes even). All of it is set to a Christmas backdrop, you even have McClane punching a reporter to the tune of Let it Snow! Now I have a machine gun. Ho, ho, ho!