Sports > Baseball > The Ballparks of the #SorentoTour

The Ballparks of the #SorentoTour 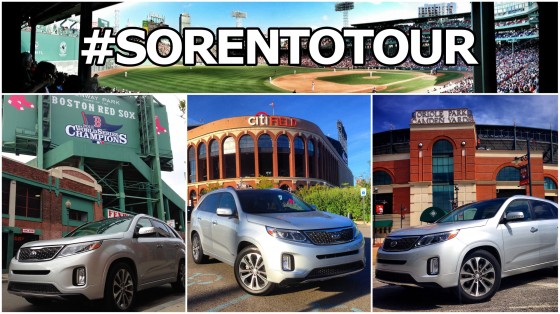 Last week we embarked upon an epic north-east road trip in the 2015 Kia Sorento and you probably saw some of our adventures via social media with the hashtag, #SorentoTour. We departed from Baltimore on Tuesday and picked up GuysGab in New Jersey with the navigation system set for Fenway Park in Boston. Once we arrived in Beantown, we began a bucket list tour of five ballparks in five days and invited some friends in each city to join us for the game. We pre-gamed at bars, tailgated in the parking lots, saw monuments to heroes past, ate plenty of awesome food, and had a great time at every stop on the tour. We detailed some of the other sights we saw in each city for a separate feature, but this articles focuses on the star attractions, the Ballparks.

Fenway Park is the oldest ballpark in MLB, serving as the home of the Red Sox since 1912. The home of the 2013 World Champions has been updated numerous times over the years, but is still a classic and one of the most well-known sports venues in the world.

Pre-Game Spot : The Bleacher Bar under the center field bleachers and overlooking the field. This unique bar is located in an area that once served as the visiting club’s batting cages. It was crowded, but we were able to secure a spot in front of the window for some pre-game drinks and food at one of the most unique spots to watch batting practice.

Highlight : Upgrading our seats numerous times. Our original seats were in the very sunny bleachers, but an early 6-0 lead by the Orioles and a Red Sox team that is long out of contention allowed us to try out multiple seating locations, finally ending up a few rows from the dugout by the 9th inning. 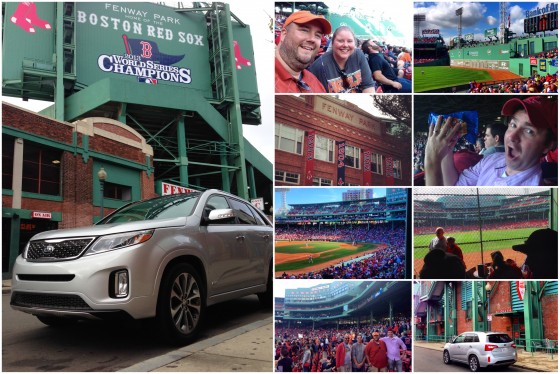 Lowlight : Seat dimensions, orientation, and obstructed views. Many of the older wooden seats are very small in comparison to modern parks, and some seats are just randomly pointed in the wrong direction, or have poles located directly in front of them. It comes with the territory in a 100 year-old park, but annoying none-the-less.

Game Result : Orioles 10-6 over the Red Sox, despite 5 Red Sox runs scored in the bottom of the 9th inning. Wei-Yin Chen of the Orioles had a no-hitter broken up in the 6th inning.

New Yankee Stadium opened in 2009 adjacent to the old Yankee Stadium, and incorporates many of the design elements from its predecessor. At a cost of $1.5 billion to construct, it is the most expensive baseball stadium ever built, but lacked the character that we like to see in our favorite ballparks.

Pre-Game Spot : Yankee Tavern – a popular watering hole located a long toss from Yankee Stadium, opened in 1923 and has hosted many Yankee legends past and present including Babe Ruth. We met the owner and enjoyed his stories of working at the bar since he was 10 years old.

Highlight : The Yankees Museum located on the main level near Gate 6. We visited this air-conditioned oasis during the middle of the game and were delighted by their amazing collection. We also appreciated the special 9/11 remembrances throughout the game. 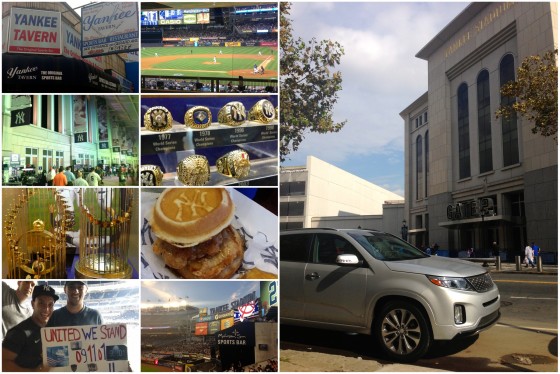 Lowlight : Obstructed view seats in the bleachers and limited availability of downloadable tickets on StubHub. Yankee Stadium ticket prices are the highest in baseball, and were the most annoying for us to secure on the secondary market.

Game Result : Yankees 5-4 over the Rays with a walk-off home-run by Chris Young. Alex Cobb of the Rays took a no-hitter into the 8th inning, but in the end Frank Sinatra sang New York, New York.

Citi Field opened alongside Yankee Stadium in 2009, and is a stark contrast in styles. It replaced Shea Stadium which was also adjacent to the new building, but cost less than half of what was spent to build Yankee Stadium. It was primarily influenced by PNC Park and seats only 42,000 fans.

Pre-Game Spot : Tailgating with the Kia Sorento in the Parking Lot. Despite published restrictions to the contrary, Citi Field was tailgate friendly with its multiple parking lots surrounding the park. We found a nice spot near the grass and were able to light up the grill and play some ladder ball. Beer poured into plastic cups seemed to avoid the scrutiny of police.

Highlight : The Jackie Robinson Rotunda was a striking exterior and interior feature at the entrance to Citi Field and a fitting tribute to the Brooklyn Dodgers Legend. We also enjoyed the FanFest area for kids behind the center field scoreboard. 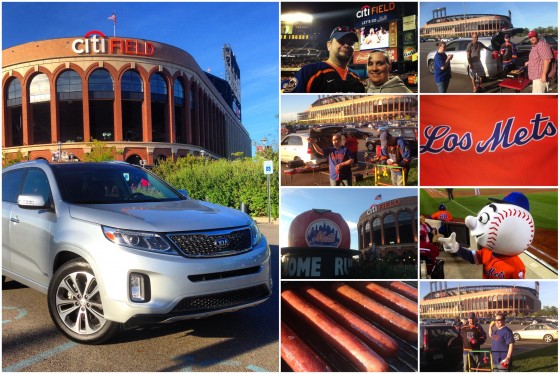 Lowlight : Traffic on Friday afternoon from Manhattan to Citi Field was atrocious. Sadly the traffic wasn’t heading to the stadium (which was half empty) but mostly to the Hamptons for the weekend.

Game Result : Mets 4-3 over the Nationals. As Nats fans, we were disappointed to see the Mets only victory of the series, but our local New York guests took pleasure in the triumph of Los Mets (it was Hispanic Heritage Night).

Citizens Bank Park opened in 2004 and replaced the thankfully demolished Veterans Stadium at the South Philadelphia Sports Complex. This gorgeous Park features an awesome view of Philadelphia and served as the home of the NHL’s Winter Classic in 2012.

Pre-Game Spot : Tailgating with the Kia Sorento in the Parking Lot. We delayed our arrival to the park due to heavy rain, but much to our delight we found covered parking when we arrived at Citizen’s Bank Park. The tailgating scene was the best we saw on the entire trip, utilizing a shared lot with the Eagle’s stadium next door.

Highlight : Our seats for the Phillies game were located in the Hall of Fame Club, which featured larger padded seats, premium food options, and team memorabilia. We particularly enjoyed the window to the A/V crew that controls the scoreboard and all other monitors throughout the park. 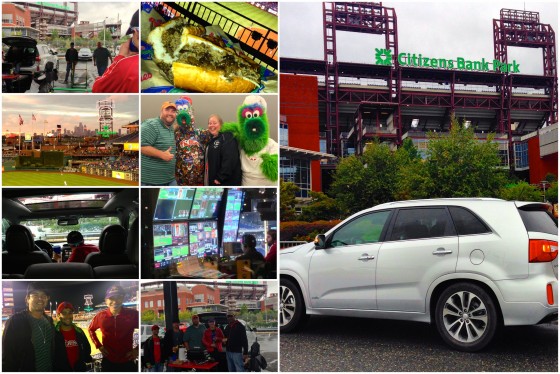 Lowlight : Sadly the park was relatively empty with Phillies fans mostly giving up long ago. Traffic to the game was non-existent beforehand, but despite the low attendance, it was ridiculously slow getting out of the stadium lots after the game due to poor traffic control.

Game Result : Phillies 2-1 over the Marlins in a very quick and uneventful game. All the scoring took place in the first 2 innings, but we did enjoy watching the Liberty Bell ring after the victory.

Oriole Park at Camden Yards opened in 1992 and is widely credited for leading the revival of the classic ballpark style in the Major Leagues. It has influenced numerous parks since its construction (including Citi Field and Citizens Bank Park), but has kept up with the times by introducing its own updates each season. Its signature B&O Warehouse remains one of the most iconic stadium features in all of sports.

Pre-Game Spot : Tailgating is sadly prohibited at Camden Yards, so we made our way to the pre-game party spot just over the left field wall at Pickle’s Pub and Sliders Bar & Grill. With the 1st place Orioles playing in the Sunday Night ESPN game, the crowd was pumped up and ready to go. We also made sure to grab a Pit Beef sandwich at Boog’s BBQ on Eutaw Street.

Highlight : Baltimore was celebrating the 200th Anniversary of the Star Spangled Banner (written in Baltimore) and commemorated the occasion with a replica flag over the batter’s eye in center field, special uniforms, and a grand pre-game entrance by the Navy’s Parachute Team. 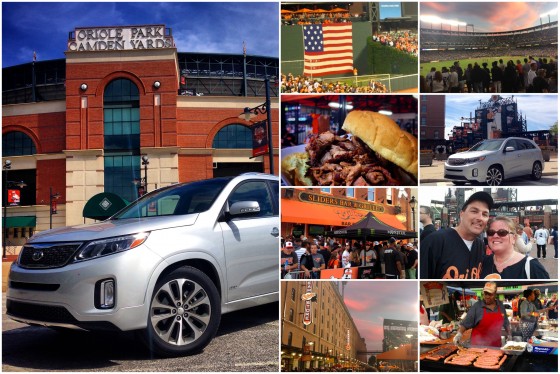 Lowlight : Our seats were oddly located at the top of stairs with a railing that required us to get up every time someone came to our section. This game was also the first sellout of our road trip (which is a good thing) but made for larger crowds and longer lines.

Game Result : Orioles over the Yankees 3-2 with a walk-off double by former Yankee, Kelly Johnson in the bottom of the 9th inning. The Yankees took the lead in the top of the 9th, but the Baltimore faithful cheered our hometown O’s to victory and a great way to end our trip.

Special Thanks to Kia for making this trip possible! 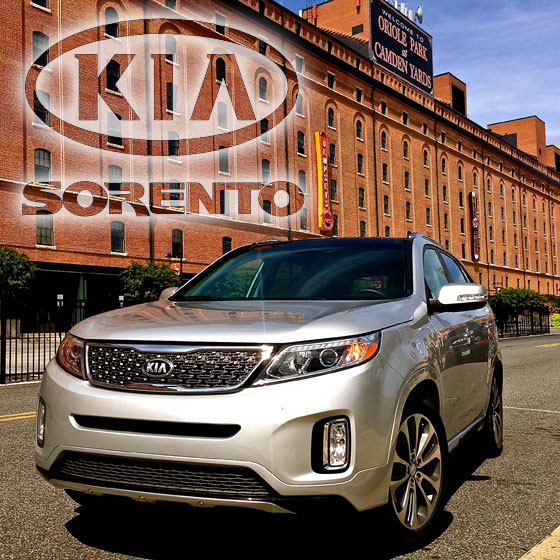