Sports > Baseball > Six Players with the Most World Series Rings

Six Players with the Most World Series Rings 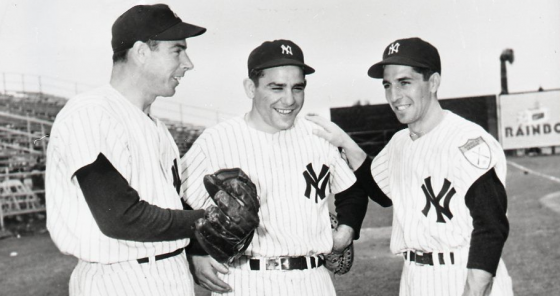 These are the top six baseball players with the most World Series rings. Between them, they have 51 diamond-studded rings decorating the clubhouse curio.

They are all New York Yankees. In fact, 19 of the top 20 players with the most championship rings played all or most of their careers with the Yankees.

Babe Ruth, for example, played on seven World Series winners: four with the Yankees and three with the Boston Red Sox. He makes the top 20, but seven rings are not enough to make the Top 6.

In our countdown to the player with the most rings of all, we start with eight, and the man who followed Ruth in the batting order.

Video: A touching and inspiring tribute to Lou Gehrig. The Pride of the Yankees passed at the age of 37.

Lou Gehrig’s career was cut short a good three or four years by amyotrophic lateral sclerosis, the disease which now carries his name. But the Iron Horse still managed to trot out to first base for the New York Yankees for 14 full seasons, and 17 in all. Gehrig came up in 1923, Yankee Stadium’s opening season, and played in just 13 games that year. In 1939, his final season, and with ALS ravaging his once-godlike physique, Gehrig managed just 33 plate appearances. In both cases, the Yankees won the World Series, bookending Gehrig’s career with titles.

In between, the Bronx Bombers won another six – 1927, 1928, 1932 and 1936-1938 – helping Gehrig to eight rings over the course of his career – tied for the third most championships of all time. The Yankees’ record in those eight World Series wins, the most dominant the game has ever seen, was 32-5, including five sweeps. Gehrig played in seven Series in total, going 6-1.

The Yankees had 47 mediocre catchers before finding a Hall of Famer at the position in Bill Dickey. Dickey first donned pinstripes in 1928, playing in just 10 games that championship year. He didn’t catch in the ’28 postseason, but was an integral part of the next eight Yankee World Series, backstopping to the beat of a 7-1 record, earning rings in 1932, 1936-1939, 1941, and an avenging 1943 victory against the St. Louis Cardinals. All together, that’s eight rings for the “Man Nobody Knows.”

Dickey’s impact on the franchise went beyond his playing years. His apprentice, himself one of the greatest Yankees of all-time, always reminded us, “I owe everything I did in baseball to Bill Dickey. He was a great man.” More on that pupil later.

Frankie Crosetti doesn’t get all the play other Yankee legends get, but a true fan knows that Crosetti was one of the greatest and truest Yankees of all time. He stuck with the organization a full 37 years, first as its starting shortstop for much of 17 seasons and then as its third-base coach for the next 20. According to baseball-reference.com, The Crow “holds the New York Yankees club record for [years of] service to the club.”

Crosetti collected rings like ground balls. Between his rookie season in 1932 and his final year coaching the hot corner in 1968, the Yankees won 17 World Series, making Crosetti the all-time greatest hoarder of championship bling in baseball history. As a player, he acquired eight rings, picking up in that first year (1932), winning it with Dickey four times in a row (1936-1939) and taking three more as a player (1941, 1943, 1947), even though by that time he was no longer the Yanks’ main man at short.

Phil Rizzuto came up in 1941, immediately took over most of the duties at shortstop for Crosetti, and bagged his first title.

The Scooter’s career was interrupted early on by World War II. He served in the Navy between 1943-1945 and stayed in form on a team managed by none other than draftmate and elder 1941 World Champion teammate, Bill Dickey.

Rizzuto returned in 1946 and snared his second title in 1947. He would go on to become a member of the Yankees greatest dynasty: Casey Stengel’s 1949-1953 teams that won five World Series in a row. Then, like a number of his peers, he took home one more title in his final season in 1956.

By that last year,though, Gil McDougald had taken over at short, and Rizzuto was not on the postseason roster. He finished his career at 7-2 on the Grand Stage. Not shabby.

9-1 is Joe DiMaggio‘s World Series record, and he played in all nine of them. It would have been 10 titles, but Joltin’ Joe missed the 1943 season in the Army.

DiMaggio joined the Yankees at a most opportune time, a rookie at the start of the 1936-1939 four-year dynasty.

In just 13 years of professional baseball, DiMaggio won nine rings, cleaning up in 1941, 1947 and 1949-1951 before deciding to wrap it  up right in the middle of the Yankees five-year dynasty at the age of 36. Had he continued his career he might have captured another two titles.

But Joe D was “not Joe DiMaggio anymore,” as the legend goes. In actuality, DiMaggio nobly stated, “Old injuries have caught up with me, and I’ve had new ones. I feel that I have reached the stage where I can no longer produce for my ball club, my manager, my teammates, and my fans the sort of baseball their loyalty to me deserves.”

Video: All the Berra basics you need to know, from the nickname to “it ain’t over till it’s over.”

Yogi Berra picked up at catcher where his mentor Bill Dickey left off. Berra has the most World Series rings of any baseball player in history, 10, and he earned every one of them. He appeared in 14 Fall Classics in all and finished 10-4 in Series for his career. 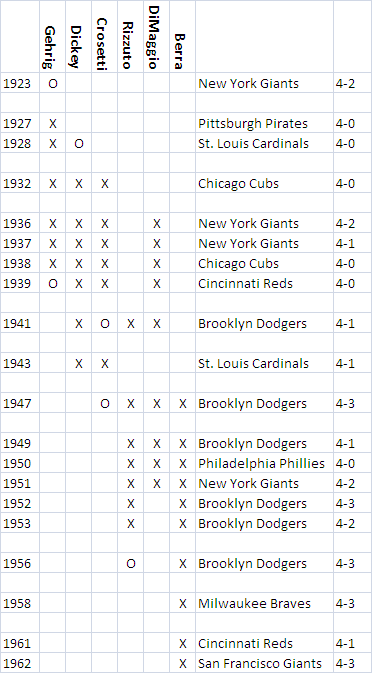