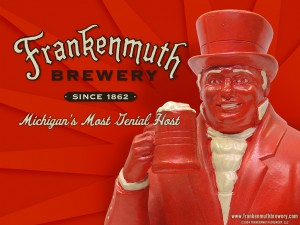 Information: Site – A medium light bodied beer with an intense hop aroma and flavor. This beer will wake up your senses to fine American hops and discover the tastes of citrus, flowers and pine.

Lately I have really, truly begun to love LOVE IPA’s. For years, when I was first getting into beer as a hobby rather than an excuse to just get drunk, I tended to avoid IPA’s because they were (and, subsequently are) so bitter. I just couldn’t get my mind around the fact that anyone would really enjoy a beverage that was so damn medicinal. I kept to the sweeter, heavier Stouts and Porters and just plain avoided the IPA’s. Boy, let me tell you I honestly had no idea what I was missing. IPA’s are some of the most diverse and varied beer styles you can find, and the best part is that every brewer worth its salt makes one… often times in several styles. Now -fast forward to today- I absolutely love IPA’s and will seek out any and all as often as I can. And thus, we come to the Frankenmuth Brewery which, as it turns out, is the oldest brewery in Michigan. I really didn’t know that. I feel sad.

The pour is a rich, hazy yellow with a hefty, fluffy head. The nose is lightly citrusy with a crisp hint of piney bitterness. The first taste is actually quite a bit sweeter than the scent would otherwise indicate. It’s not nearly as bitter as many of the other IPA’s of its ilk, that is to say the American style of the India Pale Ale. What’s the difference? Let’s see what Wikipedia has to say:

It (is) a strong, copper colored, and highly aromatic brew with a distinctive and intense hop aroma (achieved with in-house distilled aromatic hop oils) and a restrained but still distinct (and often) oaky character from the long aging in wood.

Though there is a fleeting hint of oakiness in the beer itself, it’s not what one would consider ‘woodsy’ or ‘earthy’ by any stretch. What it does have is well balanced piney tones that mix nicely with the bitter grapefruit rind. It’s delicious, cleanly merging into its second act that has something akin to banana notes and a grassy additions. As it finishes, it does so nice and crisp, but not dry. It begs for an immediate second sip… an another, and another. Just as with most IPA’s, this would suit well with salty fare like cheese or even chips. Very nice.