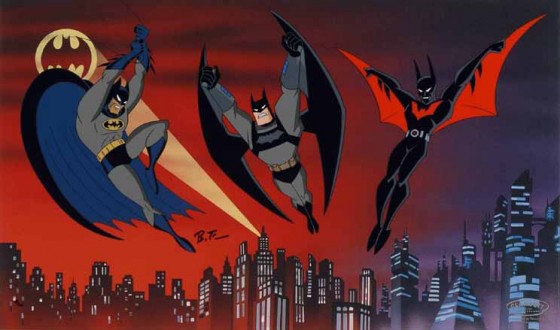 Animating a comic book icon is a bit more difficult than you’d think. Oh, it’s not so much the artwork, since the source is an already drawn image, but it is the story line and the direction in which you intend to take the character. Just about every conceivable comic book hero has been turned into a cartoon, from Spider-Man to Lobo, and each one has to stray a bit from the already set-in-stone mythos in order to appeal to a far wider and far different audience. Now one of the first and longest lasting characters in animated comic history has been the The Dark Knight; Batman himself with or without teammates like Robin, Superman, or the Justice league. It seems that every year or so (sometimes quite a few), The Caped Crusader gets a revamped and completely original animated show with a different voice cast and an all new way to roll out his rogues gallery. Here we have a look back over the decades of just how different Batman can be represented in cartoon form, organized by the year the shows left the air.

This Filmation-designed show was one of the very first cartoons of the Dynamic Duo that relied on relatively realistic-feeling animation. It featured Olan Soule as Bruce Wayne/Batman and Casey Kasem as Dick Grayson/Robin. Kasem would go on to provide the ward’s voice over for many years.

Another entry into the Filmation collective of DC Superhero cartoons, TNAB featured the oft loathed Bat-Mite as a tag-along pest for the Duo who, more often than not, got the team into stickier situations. Bat-Mite was a lot like the Orco of the He-Man universe in that they were only trying to help even when they were in loads of trouble. His voice was equally as annoying. This show was filmed simultaneously with Hanna-Barbera’s Super Friends and tried hard to compete, ultimately having to adjust its line-up in later years. The set was recently released on DVD last year and saw a resurgence in popularity.

The name Super Friends actually encompasses seven different incarnations of the series over the years each focusing on the DC Comics Justice League. Originally, the main players were Superman, Batman, Wonder Woman, and Aquaman, with occasionally Robin and a set of ‘Super Helpers’ in the form of kids and a pet. Eventually the show brought on not only more comic related enemies like Lex Luthor and Gorilla Grod, but also new teammates like Hawkman and Hawkgirl, and Green Lantern. It was a long-running show and a definite favorite of the fans. This, too, saw a new climb in viewership thanks to many of the titles released to DVD as recently as last year.

Often touted as the best and most accurate telling of the intended DC Comics Batman Mythos, B:TAS series was partially inspired by the Frank Miller comic Batman: The Dark Knight Returns, the Tim Burton films Batman and Batman Returns and the acclaimed Superman cartoons produced by Fleischer Studios in the 1940s. The visual style was very fluid and even tried hard to distinguish in animation the differences between Wayne and the Crusader. Eventually, after the show switched time-slots, it was changed to The Adventures of Batman and Robin.

This particular animated story arc takes place just after the other Warner Brothers Produced, Batman: The Animated Series. In this show, story arcs tended to focus more on the Knights supporting cast including Robin, Nightwing, and Batgirl. It also had tertiary characters who would later go on to appear in Justice League Unlimited.

This show was a bit more of an anthology series collecting episodes from The New Batman Adventures and Superman: The Animated Series. Generally each show in the run would replay half-hour episodes from the aforementioned programs, however sometimes there would be a stand-alone created specifically to include both players. One such was a retelling of the first meeting of the Man of Steel and the Caped Crusader called ‘World’s Finest’.

This particular Batman animated series took the mythology in an entirely new direction from any before or after. Though it fits chronologically in the DC Comics timeline of Batman, it only uses Bruce Wayne as a inspirational backdrop, as he is a reclusive soul living in a futuristic Gotham with his guard dog. Terry McGinnis is the new crime fighter and, after an assist from Bruce, while fending off a gang, finds the Bat-Cave and the treasures therein. The series is available either ‘On-Deman’ from some satellite/cable companies or on DVD.

Though the show featured a ton of irregular cast members (the first episode alone had fifty), JLA-Unlimited focused mainly on what it referred to as ‘The Founding Members’, including standard favorites as Superman, Wonder Woman, and, of course, Batman. Most episodes were single-story lines, but many arced into one another and even played off of other running cartoons of the time featuring Supe’s and Bat’s.

Though the show does focus on a younger Bruce Wayne, his butler Alfred, and the typical enemies and reciprocating defensive gadgets that all the other Batman stories incorporate, it does not follow a pre-set timeline from either the comics, movies, or other animated series. The action tended to be stronger, the themes a bit lighter, and yet the rogues were highly stylized and re-imagined. The Joker was far more antagonistic and hands-on, Mr. Freeze was a faceless sadist spouting icy puns, and Cat Woman assisted Batman as often as fought against him. If you currently have Cartoon Network’s Boomerang, the show is replayed several times a day.

Easily one of the most creative and inventive versions of the animated Batman collection in recent memory, B:TBATB focuses on a segmented storyline. The first few minutes, before the title bump, shows Batman and any given hero partner (see: Green Arrow, Red Tornado, Blue Beetle…) fending off any number of Batman’s extensive and often silly rogues gallery like Clock King, Gentleman Ghost, B’Wanna Beast, Chemo, and Music Meister. Then, after the title, the real story kicks in and it, too, is just a longer version of the first segment. Batman acquires a partner, often reluctantly, to do battle with yet another from the list of hundreds of bad guys. Batman is voiced this time by Diedrich Bader along side an enormous cast of well known contributors. The show airs weekly on Friday nights at 8:30 on Cartoon Network.