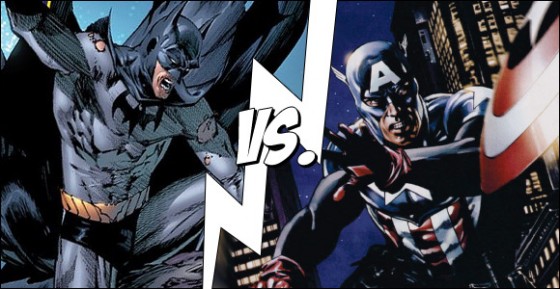 Despite the tragedy in Colorado, The Dark Knight Rises is on track to become one of the biggest films of the summer and all-time. That puts it in direct competition with the earlier released Avengers film. Which leads some fans to speculate what would happen if Batman were to take on an Avenger in a fight, let’s say Captain America for example. It’s the type of topic that we’ve covered here in the past, but one that ultimately doesn’t really have an answer… until now, sorta. Thanks to the magic of “Ultimate Fan Fights“, you can watch these two Superheroes go at it in the video below :

As you can see, at the end they actually let you decide on your own winner, and if you’re like me, you’ll watch both. While this video is very well done, the best part to me is the comments on YouTube. Reading your arguments for why your favorite comic hero would win in this fictional fight is pure gold.