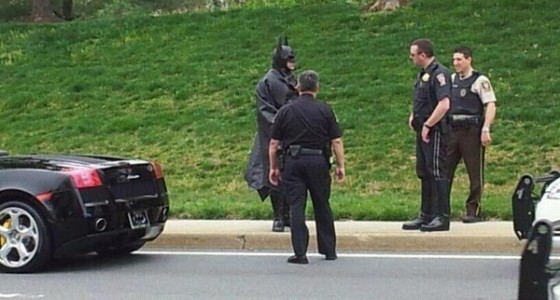 By now you’ve probably seen the photos and heard the story, as it’s all over the Internet. Batman was pulled over last Wednesday in Maryland, while driving his Lamborghini Gallardo. Since I’m from the area, I’ve taken a keen interest in this tale of the Caped Crusader running afoul of the law, and have gathered additional details that you won’t read in the Daily Planet. First, the basic story (via Patch) :

Montgomery County Police pulled over a man dressed as the caped superhero as he was driving southbound on Route 29 near Prelude Drive. The reason: his Batmobile didn’t have any tags. 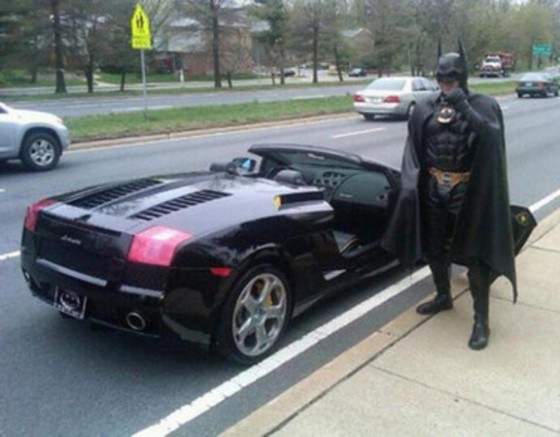 Subsequently the Police shared some photos via their social media channels, and later provided the following info to the Daily Mail :

According to Capt. Starks, a man dressed as the comic book hero was pulled over on Interstate 29 in Montgomery, Maryland, outside of Washington, DC. He told MailOnline: ‘An officer on routine patrol saw a Lamborghini with the rear plate – it was the Batman symbol for the show. He pulled him over and said, “what’s going on?”’

However, Batman had both front and back plates with him. ‘The car was registered, and the man explained that he goes to hospitals and does work with kids (while in costume),’ Capt. Stark explained. As for the reason why he didn’t have plates in? Capt. Stark speculated that he didn’t want to ‘ruin the effect’ of being Batman – thus going completely method. A tipster told Jalopnik that the plate’s screws simply would not fit with the luxury car.

…and thankfully for those children, they let Batman go with just a warning, and he was able to make it to the Hospital in time. Via Allen Goldberg comes the story and photos of his destination that day :

Batman left his underground cave last Wednesday to travel to Georgetown Hospital to visit with children with cancer and other serious illnesses as part Hope for Henry’s annual Superhero Celebrations. Here are photos of the famed crime-fighter in action after freeing himself from the clutches of local law enforcement:

The Dark Knight joined Wonder Woman and Spiderman at Georgetown where their superhero powers comforted children fighting life-threatening illnesses. The kids, hematology/oncology inpatients and outpatients being treated at Georgetown, enjoyed their time with the superheroes, and were treated to time in the Batmobile; gifts of superhero toys and books; caricatures of themselves posed as superheroes; superhero photo booth pictures; and much, much more. The superheroes return to Washington, DC on Monday, March 26, at 10:30 am to spend time with pediatric cancer patients at Hope for Henry’s Superhero Celebration at Children’s National Medical Center.

This isn’t Batman’s first brush with the law though, on Halloween last year, he was spotted with police on the same road. Click play on the video above for the 911 call (sorry about the irrelevant ad from Fox). Unfortunately the Batmobile lost its wheel, and the Joker got away…

“PFC Brandon Stickles (pictured) and PFC Chris Calcaterra responded to assist a disabled motorist in the fast lane on U.S. 29 southbound on Halloween around 11 a.m. The driver, donning a Batman costume, was on his way to a hospital in Washington, D.C., to visit sick children when his Batmobile got a flat tire in the area of Johns Hopkins Road. After clearing the vehicle to the highway shoulder to be towed, the two crime fighters posed for a snapshot. The masked man got a ride from a friend to the hospital appearance. 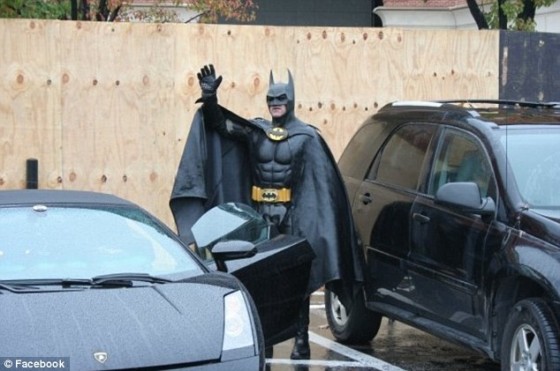 So who is this masked man? His name is Lenny Robinson, from Owings Mills, MD. The Baltimore Sun told his story, back in 2008:

“Around eight years ago (2000), I started becoming Batman,” says the man, whose secret identity is not Bruce Wayne, cave-dwelling playboy-industrialist, but Lenny B. Robinson, divorced dad from Owings Mills with a commercial cleaning firm. Robinson, 45, said the bat bug bit him during a snowstorm, when he and his then-6-year-old son, Brandon, were cooped up at home. Brandon was into Batman, so they decided to build a Bat Cave in the basement. Dad got into it in a big way. 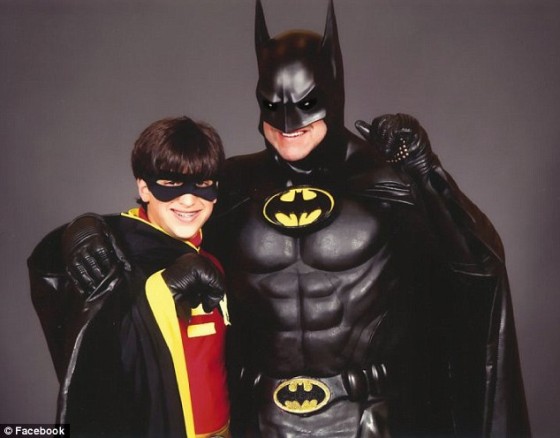 “It was like one of those movies when I was a little kid, the original Freaky Friday, and the mom changed into the daughter and the daughter changed into the mom,” he said. “It’s so weird, but I just became Batman.” Next thing he knew, he was writing a $65,000 check for a Chrysler Prowler decked out to look like the Batmobile. He paid some costume-maker in South Jersey $10,000 for an authentic Batman suit with custom mask and leather cape and gloves. “I didn’t want the ones you go to Party City to buy.”

…but what about that Lamborghini Gallardo Spyder? Apparently that’s Lenny’s new Batmobile, and despite the $200,000 price tag, it’s not entirely authentic. While Bruce Wayne is known to drive a Lamborghini around Gotham, in The Dark Knight he drove a Murciélago LP640, and in this summer’s The Dark Knight Rises he’s expected to get behind the wheel of an Aventador. 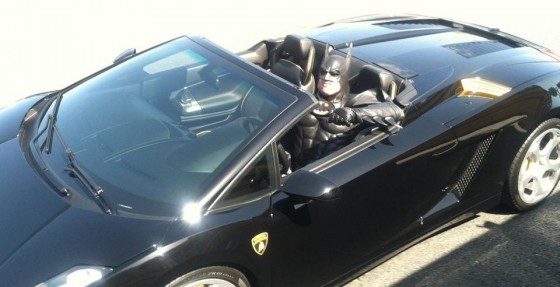 I suppose we shouldn't be picky, it's still badass