Gadgets > Other > Most Bizarre Gadgets From Batman’s Utility Belt 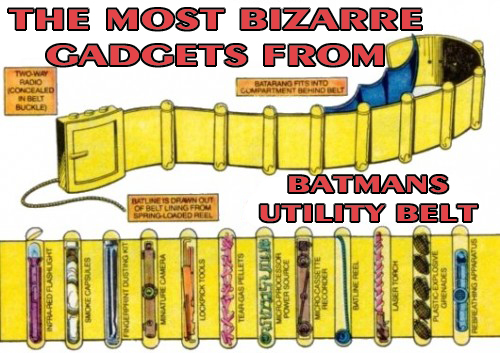 Much like a Warner Brothers cartoon character who needs to quickly locate a giant hammer or a portable hole, Batman has the ability to not only questionably carry, but also magically have at hand any piece of necessary equipment for the given sticky situation. Though his utility belt is his standard mode of item transport, Bats has been known to also merge tools and equipment into his gloves and other pieces of his costume. Basically, if he needs a set of water-proof lock picks to use in a room rapidly filling with the ocean, generally just by nudging a button on his thumb he has a pair ready for use. In fact, the entire point of having a utility belt in the first place – especially for a crime fighting superhero with no discernible super powers – is to augment Batman’s already keen and heightened senses. But that doesn’t mean Bats doesn’t have some awfully convenient and ridiculous mechanics up his well-stocked sleeves.

Fortunately this is not nearly as disgusting as the description sounds. Though it does emanate from his belt which is dangerously close to his Bat-junk. No, in reality, Bat Goo is exactly the same as any of a number of Police Force’s sticky, tenacious substances used to incapacitate criminals. The only real difference, I suppose, is that Batman’s goo is likely far more advanced and has stronger bonding and a fuller coating. Man, this stuff really does sound like Bat-Bukkake. Gross. 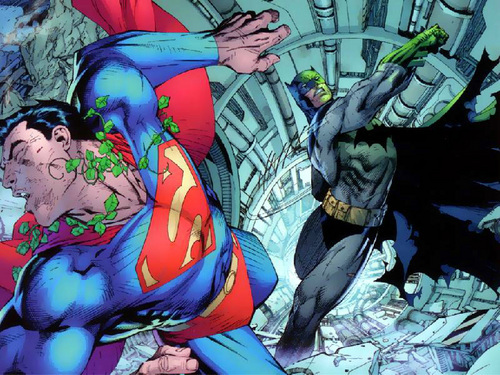 That’s right, Batman -Justice League Member and all round trusting and mellow dude (sarcasm)- has a ring in a red box on his utility belt just in case one or both of two potential shitstorms go down: Superman goes bat-shit crazy (again), or a bunch of loony Krytonians happen to overtake Earth. That’s akin to carrying a plastic bag full of carrots whenever you go hang out with your best friend because he’s allergic to carrots. What a douche. 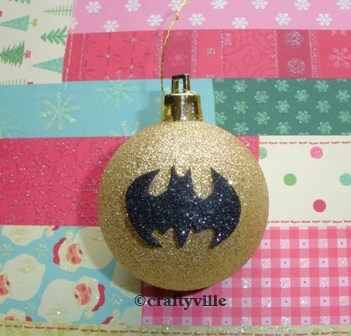 We all know Batman is a closet lunatic, but this is ridiculous (rim shot). Apparently, Batman is such a smart, learned detective and crime fighter that he has even mastered the art of false pretenses. You see, Bats can remove his marbles, and with a light touch, toss them down a corridor or stairway and imitate someone walking to thus confuse and call out his enemies. Or, he can shoot a game using his best Aggie. Batman is a fun guy.

Much in the vein of Luke’s Lightsaber, Batman’s sword can be ‘unfolded’ and basically turned on. The blade is sharp enough to cleave metal, slice through armor, and even carve through a pop can and still cut wafer-thin tomatoes for his Bat-Lunch! Evidently the handle and such mechanics are small enough not to bee seen sticking precariously out of his utility belt or he’d be tripping over the damn thing. 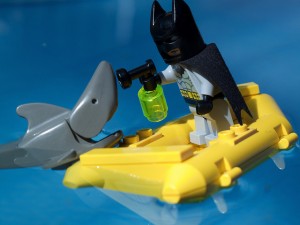 Boy how incredibly convenient would it be were you to have a spray concocted just perfectly to do away with specific targets. Somewhat similar to wasp and hornet killer (though trust me, that shit does a fine number on a great variety of insects) the Repellent Bat Spray is scientifically mixed to be most effective against one member of the rogues gallery such as a faceful of spicy pepper for Captain Cold and maybe the odor of a luggage factory for Killer Croc. I guess. Hey, even in the old 60’s show with Adam West and Burt Ward, Batman used a shark repellent spray. Wow, jumping the shark long before Happy Days, I’d say. 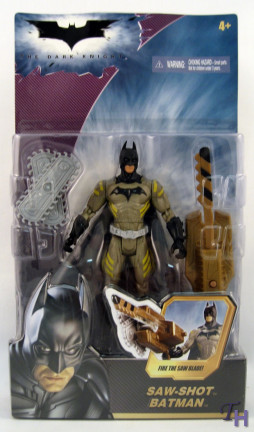 For all the moving parts and necessary power source to run a miniaturized skill saw, it still turns up in Batman’s arsenal of incredibly useful items. In fact, it’s even been acquired through the gloves, which make even less sense to me. I could see a tiny Dremel-like tool being snatched on the quick from the belt, but how a dime-sized blade with microscopic teeth could comfortably fit in he finger if a glove is way beyond me. You’d think this was comics or something. 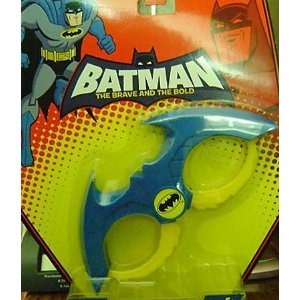 Bare with me here, because at first this seems like a pretty standard piece of equipment. Bats has a few sets of these super strong cuffs made from diamond covered, high strength steel that literally have to be permanently slid on over the perp’s hands. Yeah, I said permanently. Well that doesn’t make sense or else we’d see hundreds of bad guys walking around still cuffed. Oh wait, it seems that Batman was kind enough, and had the forethought to issue everyone on the Gotham Police Force special cuff cutters. Of course he did. 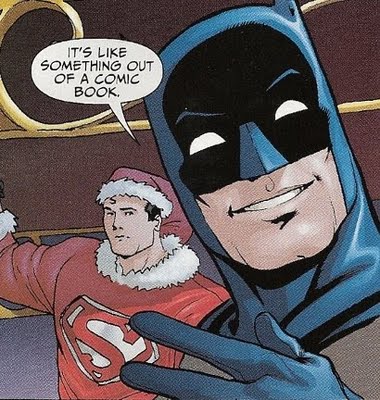 Through the years, Batman has come to know his repeat offenders so well that whenever he’s called away to tackle a foe he’s dealt with time and again, he often packs the essentials he’ll need to just fight that specific person. If he has to fight Mr. Freeze, he’s likely got a boatload of heaters. If he’s going up against Dracula, he’s packed the garlic bread and hot cross buns. If it’s Poison Ivy; plant killer. Batman is smart and he knows the situation he’s heading into before he even gets there so it makes sense that he’d come packed to the gills with enough stuff to fill a military duffel bag. None of which should be able to fit in a belt. And yet, here we are.