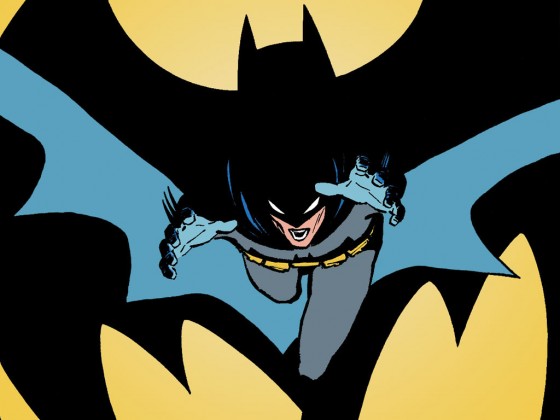 Batman is, by his own account, the world’s greatest detective. We’re not sure he verified such a claim but chances are no one challenged it out of fear of becoming the owner of a broken neck. But is he really anymore efficient at super-sleuthing than the next billionaire karate master? We think these covers answer that question with a resounding “no.”

(All covers gathered from Cover Browser) 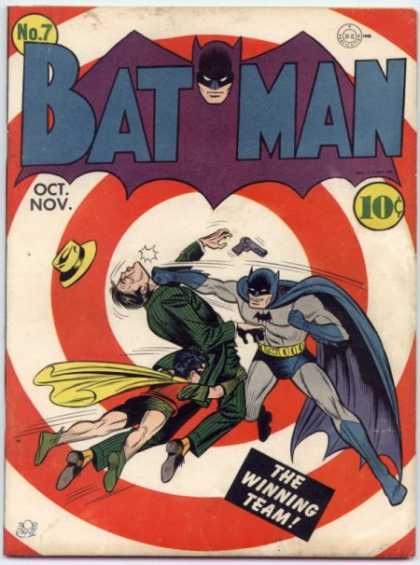 Our first clue that there’s something off with the Batman's mental capacity is this cover, which reveals that Batman taught his young ward the absolute worst ways to fight crime. Unless Robin moonlights as a junior proctologist and prides himself on performing the most thorough prostate exams in Gotham, there’s really no reason to justify his head getting more ass than a toilet seat. 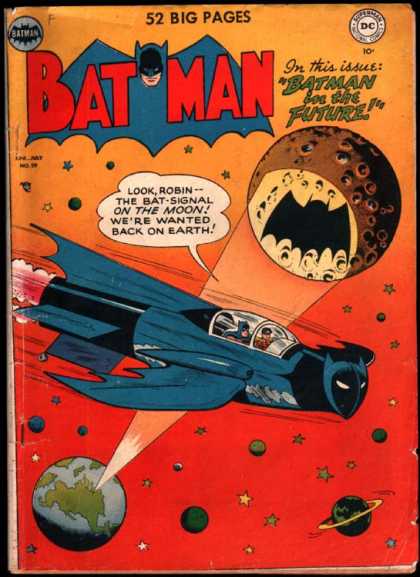 Okay, Batman has a space car. Whatever. But here’s something: how is he possibly going to get back to planet Earth in time to stop whatever crime is already in progress? Also, if the Gotham police department has developed a searchlight that can be seen on the surface of the moon, couldn’t they theoretically put another hero on the payroll for when the Dynamic Duo are playing Apollo 13? We’re pretty sure Superman can deal with the likes of the Penguin. 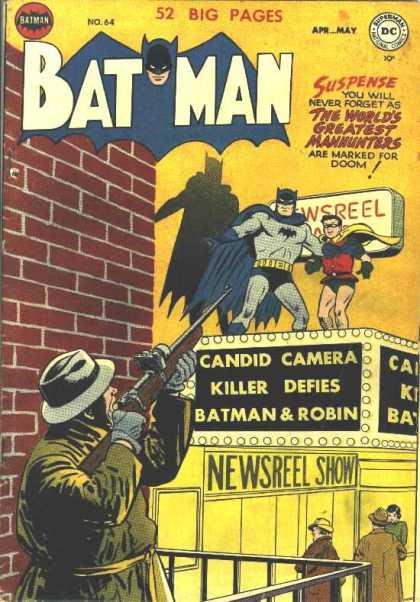 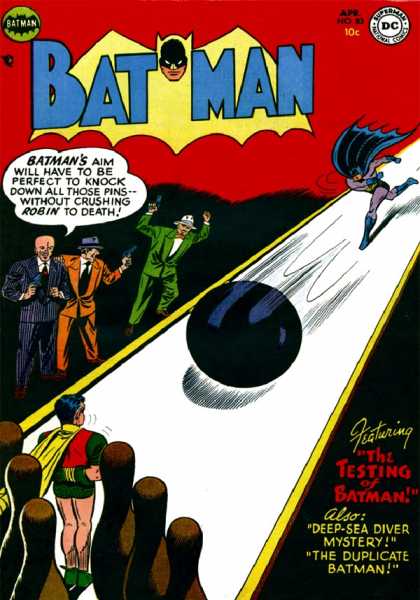 A lot of the older covers break down into Batman putting Robin directly in a life-threatening situation, and after a while you have to assume that it doesn’t take much to talk Bats into it. Just look at the setup here: not only would these gangsters have to tie up Robin and force him to stand up the entire time, they also have to break out the large novelty bowling pins and arrange those, too. Now you know in that time period Batman could have played out sixty different scenarios that end with three sharp-dressed quadriplegics, but instead he hurls the Indiana Jones-esque boulder ball at his partner with gusto. Why? Because he wants to. 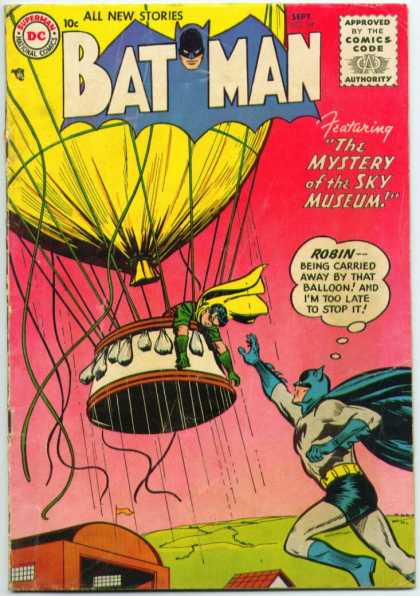 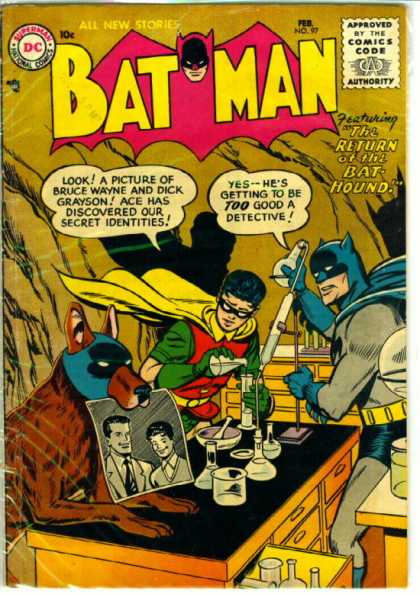 We’re pretty sure this issue ends with Ace being poisoned and buried in a shallow bat-grave.

Alternate joke for animal lovers: Ace would eventually find the Lindbergh Baby, solve the JFK assassination and find a practical means to bring peace to the Middle East.

Batman would later poison him. 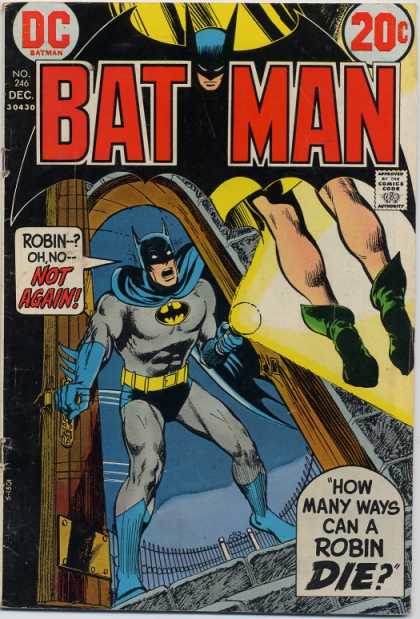 When your Robins keep dying in gruesome ways -- when you can honestly say that you’ve gone through more young men than John Wayne Gacy -- it’s time to hang up the cowl and realize you are no longer doing society any favors. You should never be leading the Joker in killing your own sidekicks, as that’s actually a successful means of measuring your current rate of failure. 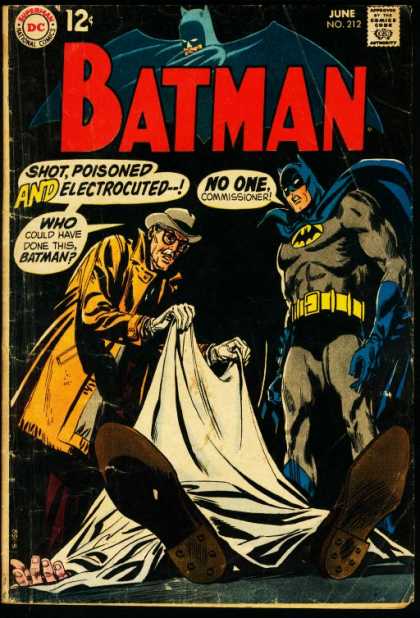 “I know we live in a city that features the single most fucked-up criminal base on the planet, but I’m absolutely certain that no one could have done all three of those things, commissioner!”

In hindsight, Batman isn't a response to the criminal element of Gotham so much as the criminal element is born from Batman's mere existence. Seriously, with ace police work like this is it any wonder how the middle-aged man covered in question marks managed a career in crime? 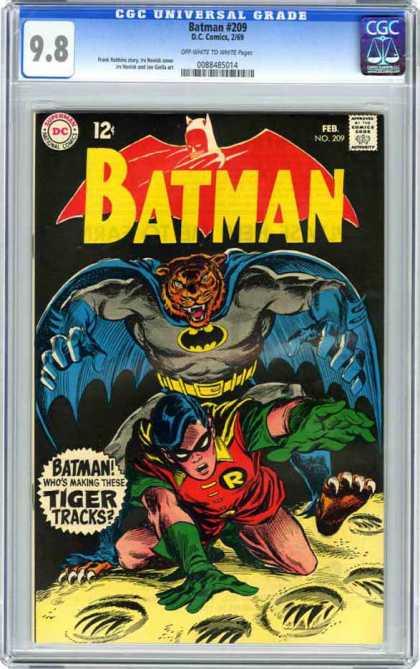 Despite claiming to be the world’s greatest detective, Batman never once taught Robin to be aware of his surroundings. At no point in his super career of being shot at, drowned, umbrella’d to death, attacked by giant hands (threed times), attacked by a mob of blind men (twice), blown up in a phone booth and being turned into some kind of fish-man, did Batman think to tell Robin to keep an ear low to the ground. That’s because he knew someday he’d have to go full tiger and just straight-up eat the orphan bastard. Perhaps he’s not much of a detective, but we’ll give the man credit: he really does plan for the long-term.