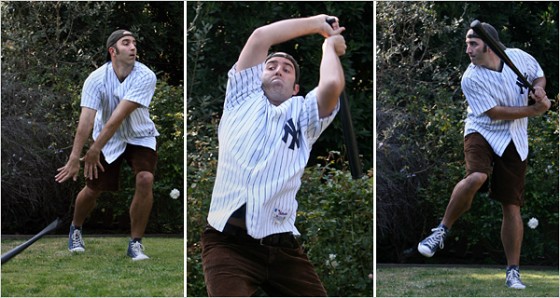 Gar Ryness, better known as the Batting Stance Guy, is an American sports entertainer and Youtube phenomenon. He is known for his ability to perform spot-on impressions of the batting stances of Major League Baseball players. He can mimic the batting stances of the starting line-ups of all 30 MLB teams with alarming accuracy.

His talent has made him a favorite in Major League Clubhouses, on baseball broadcasts, and has even landed him on the Late Show with David Letterman :

Gar recently joined us on our podcast, The Gunaxin Show to discuss his unique talent, and his new book, “A Love Letter to Baseball.”

Gar has a shit-ton of videos on his page, and his YouTube channel, but we’ll share some of his most popular here.

This is the video that started it all :

The Rise of the ‘Batting Stance Guy’

Listen to our interview with Gar below, on the Gunaxin Show. The Gunaxin Show is classified as Explicit, so probably NSFW, unless you work here.