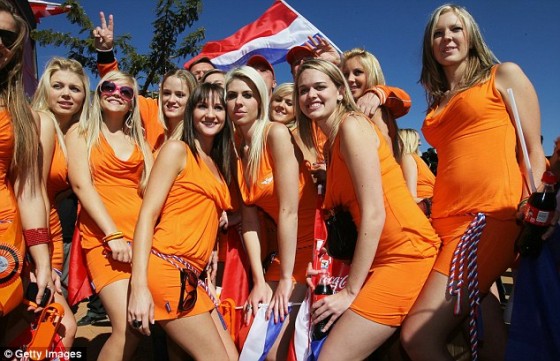 Thanks to Bavaria Beer, the big story at the World Cup has finally moved away from stupid horns, to focus on hot chicks wearing Oranje. As a man of Dutch descent, who runs a site with Sports, Babes, and Beer, this story couldn’t be more perfect for me. 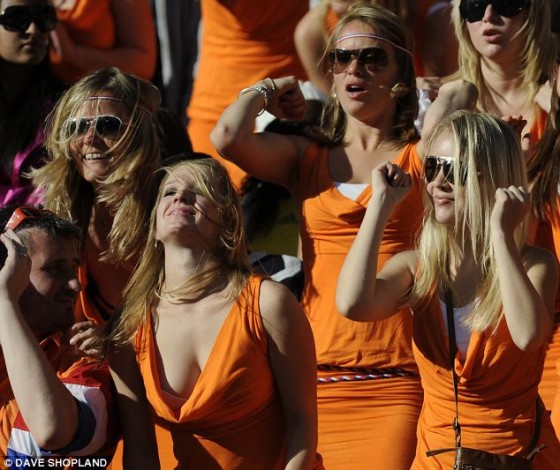 Via DJ Mick, we’ll fill in some details via quotes :

36 beautiful blonde Dutch fans were kicked out and then arrested during the Holland – Denmark World Cup for wearing bright orange dresses. The dresses were sold with Bavaria Beer packs in the Netherlands in the run-up to the World Cup, but football governing body FIFA accused the young women of staging an ambush marketing campaign.

Apparently FIFA was right in their accusations, however you still have to question tossing patrons out of your stadium who aren’t even wearing any logos of a competing beer sponsor. The NY Post has more :

“We were sitting near the front, making a lot of noise, and the cameras kept focusing on us,” Barbara Kastein told the newspaper. “In the second half, about 40 stewards surrounded us and forced us to leave the stadium,” she said.

In addition, it seems these young ladies came into the Stadium dressed as fans from Denmark, and then stripped off the colors to reveal the Orange dresses beneath. 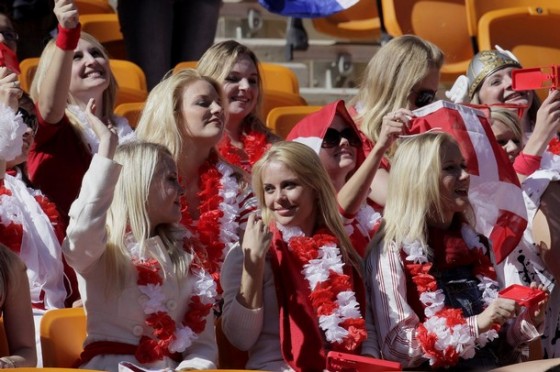 Well known soccer analyst Robbie Earle has been unceremoniously relieved of his duties by ITV after it was learned that the models gained access to the stadium via tickets Earle provided for friends and family which were subsequently passed on to a third party for “unauthorised purposes.” The issue at hand is Budweiser is the official beer sponsor of the World Cup and no other beer company is allowed to promote itself within World Cup stadiums.

Quite the ruse, wouldn’t you agree? Too bad it didn’t work out as well as planned. Now some poor bloke is out of a job and World Cup attendees are still forced to drink crappy Budweiser. Damn those sneaky Dutch bastards, with their sexy models and tasty beer. 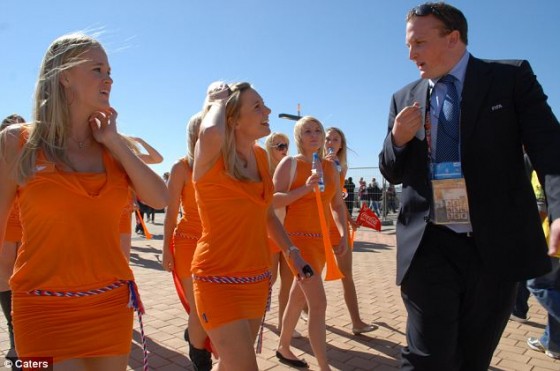 I’d have to disagree about this stunt not working as planned, it worked even better. By kicking the young ladies out of the stadium (apparently South African models, hired to wear the dresses) they drew more attention to the situation, in what has turned into a Streisand Effect. Honestly, which advertiser is getting more publicity and good will out of this? I think you’d have to pick Bavaria over Budweiser for sure.

Through some further photo research, I have been able to collect some additional photos of these beauties, and other Dutch fans wearing these now famous dresses. Hup Holland Hup!