Beer and Boobs with Eva Longoria 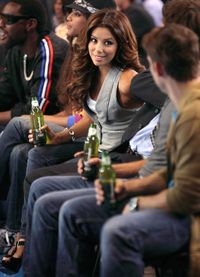 I don’t now, nor have I ever, watched Desperate Houswives for the simple fact that there is always something better and more entertaining on than a show about a group of hideously annoying cougars trying to either out do each other, or kill one another. Oh I’ve been told about just how hot this show is and just how sexy the cast’s MILFs really are and how it’s a great show to watch with one’s wife, blah blah blah. Yeah, well, my wife hates it, too. So there.

Anyway, one of the ladies on the show is one Eva Longoria. Where the hell else do you know her from? What, you mean aside from just being eye-poppingly hot and spread willy-nilly all over magazines, tabloids, cereal boxes, and highway billboards? Well, she was apparently on The Young and the Restless. So there. But, alas, none of this crap really matters now that she, too, has decided to sprint down the path of the beer ad. Mrs. Longoria is now hocking the Heinie’s like Jennifer Aniston. Check out her new commercial and then just stare longingly at her stunning image. Maybe go watch some Desperate Housewives now, too.

Here is some behind the scenes footage, with much more Longoria: