Beer and Boobs With Hayden Panettiere 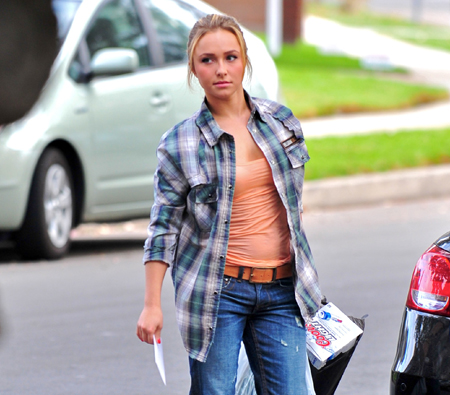 Let’s assume for a second that the once-cool NBC drama about a bunch of douchebags with special powers called Heroes never existed. Honestly, at this point in its rapidly declining ratings, it really wouldn’t have mattered one way or the other. However, that being said, were this show to have died on the drawing board, we, as a slack-jawed, gaping nation would have no earthly clue who Hayden Panettiere (Pen-Uh-Tee-Air, by the way) was or is. But we do, and she is pretty cute for having the rough stature of a juiced- 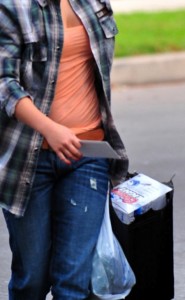 She is now 20 and has officially begun making guys who still tune into the Heroes debacle drool a little more relaxed and, shall we say, legally. Yet, this Gelfling mighty-mite is still only 20 and as we see here, she’s lugging a box of beer around. I’m no saint and hardly a person to pass judgement, but it seems to me that someone as high profile as Ms. Panicotta here ought not be caught out toting a case of, well, crappy beer. Maybe she’s holding it for a friend. Maybe it’s full of internal organs and viscera from the most recent guy she snacked on a-la Gollum. Either way, it’s a case of brews, she’s a little cuter than the ass-end of a donkey who also happens to have something of a body that could, eventually, look better than a sackful of laundry – um, Hayden I mean, not the donkey. Thus: beer and boobs. Enjoy! Oh, and while I’m at it, big Ups to WWTDD.com for the original lowdown.

I bet you can’t resist a dancing Hobbit!