Beer and Boobs With Ivete Sangalo and Nova Schin 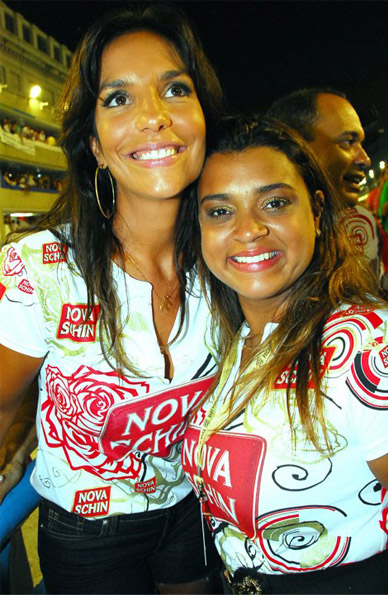 This is interesting, because it’s two, two, two things I’ve never heard of! Well, okay, I’ll stipulate that I have at least seen Nova Schin in a store before, but was only in passing. As for Ivete Sangalo, I haven’t got a clue, but we’ll hope she is the one on the left. We’ll let Wikipedia, the wonderful world of shit you don’t know, explain who she is for us!

“Ivete Sangalo (born May 27, 1972 in Juazeiro, Bahia) is a Latin Grammy Award-winning Brazilian Axé and MPB singer, songwriter, and occasional actress and television show host. Sangalo has Spanish descent. She is one of the most popular and best-selling Brazilian female singers of the present, with six albums released with “Banda Eva”, and seven more albums in a solo career, with a total of over 12 million albums sold worldwide. Ivete is most often recognized by her powerful voice, charisma and live performances. Her music is also very popular in Portugal“

No shit? Huh! Well I guess it might have helped to be of Brazilian persuasion, a background of which I am decidedly not. Well, let me apologize to our readers who, unlike my idiotic self, know and love her. Fortunately for me, she has a rack and she drinks Nova Schin… or at the very least shills for ’em. So, with that, let’s discover together what delicious beer products N.S. makes, shall we!

“NS2 (Nova Schin 2), a beer with tequila and lemon, is the first and only of its kind ever brewed in Brazil. Nova Schin Malzbier (a black and sweeter beer), Nova Schin Munich (a light darker beer), the non-alcoholic Nova Schin and the popular, the Nova Schin chopp (a lighter and fresher draft version of Pilsner) are the other varieties brewed by the Schincariol family.“

Yum! I’ll have to explore this brew at a later date in an entirely different article. Anyway, another series of ads Nova Schin has put out lately make use of pregnant women and their desire to continue imbibing the very nectar that likely got them in that situation in the first place. As you can see below, the ad campaign featuring these lovely expecting ladies has done pretty well for the Non-Alcoholic brew, and, well, despite my disdain for such pointless pilsners, hot ladies are hot ladies, right? Thanks Nova Schin!