Ananova has the story of a Chinese peasant who has made a solar water heater out of used beer bottles:

The beer bottles lie on a board in rows, all connected by hoses which allow cold water to flow through them and be heated by the sun. “I invented this for my mother. I wanted her to shower at any time more comfortably,” says Ma Yanjun, a carpenter, of Qiqiao village, Shaanxi Province. “A real solar water heater is too expensive to me, so I came up with the idea of making one on my own. “I hope this invention can be promoted nationwide, and allow mothers in undeveloped rural areas to have a hot shower.” Ma has now helped more than 20 families in the village to make and install their own beer bottle solar water-heaters. He says he will build a public bathroom for the village using his invention when he has the money to buy enough beers.

So that makes me wonder, is heating water more expensive than beer? I guess if they are going to drink the beer anyways, may as well do something with the bottles I suppose. 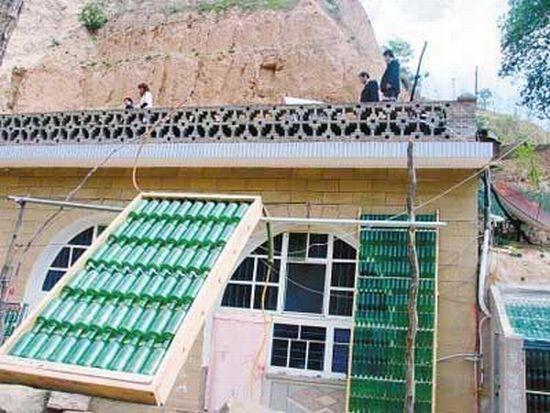