Sports > Other > Behind the Scenes at ESPN Radio

Behind the Scenes at ESPN Radio 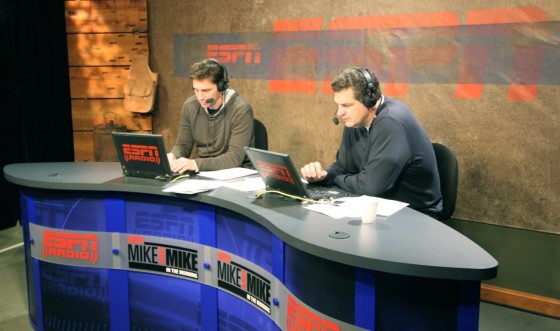 Which one is Mike?

On the Thursday before the Super Bowl, we had an excellent opportunity to go behind the scenes with ESPN Radio. ESPN made Fort Worth their home for Super Bowl week, and it seemed to me that they took over the city. They were setup all over Sundance Square, and hosted shows free to the public outside. Lucky for myself though, the radio folks decided to move their set inside, so I was able to spend most of the day in the warmth of the green room. Unlike the SportsCenter commercials, there were no mascots wandering the halls, but it was tough to turn around and not spot some sports celebrity. The offices were crawling with athletes, ESPN staffers, on-air talent, and promotional people for the brands that the athletes were representing. The ESPN producers had packed the day full of great guests, as evidenced by this schedule for the day. I was told that Jerome Bettis had requested an early interview and they apparently accommodated. 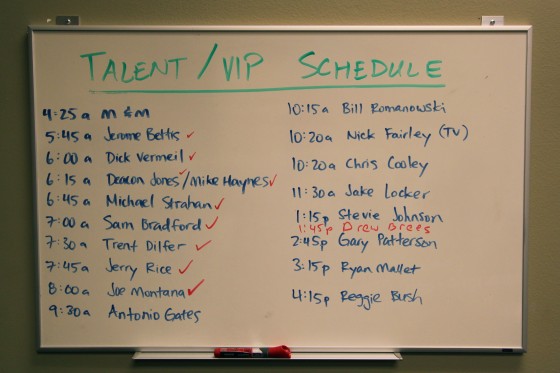 This photo was taken before Kenny Mayne wrote himself into the schedule.

We arrived just in time to catch Joe Montana signing autographs outside for the crowd. I actually discussed the scene with him a bit later, and we both lamented the fact that so many dealers really just stalk these guys in order to make profits on eBay. After getting oriented in the offices upstairs and warmed up a bit, I began introducing myself to the numerous people who were milling about. I took the opportunity to record video 6Q interviews with Joe Montana, Antonio Gates, Bill Romanowski, Nick Fairley, Chris Cooley and Kenny Mayne. We’ll be editing those and releasing within the coming weeks.

I was invited on this trip by Don Povia from Catalyst PR, but you may also know him from Hugging Harold Reynolds and Blogs with Balls. Don took the opportunity to record a bit of content himself, which provides another angle from the green room. First capturing the scene of Bill Romanowski as a Smoothie King pitchman (hilarious), and then taking some time with Chris Cooley to discuss social media and Sports Buzz. Cooley had actually come down to Texas specifically to spend the day with ESPN, and was making the rounds through all of their different shows. For this reason, he and his wife Christy were hanging out in the green room for much of the day. For a Redskins fan such as myself, it was a bit surreal.

I honestly couldn’t keep up with all that was going on around me. In addition to the three radio shows (Mike and Mike, The Herd, Scott Van Pelt), there were also interviews for the various websites happening. There were so many forms of media being executed at once, with various personnel taking care of interviews in written, podcast, online chat, television, and video form. While Fort Worth was a bit of a hike for many of these athletes who probably had other events to attend in Dallas, I could tell ESPN was really doing their best to make it worth the trip.

To give you an idea of what the scene was like, I’ve put together a video that also includes some photos and audio (from ESPN’s podcasts) that were captured that day :