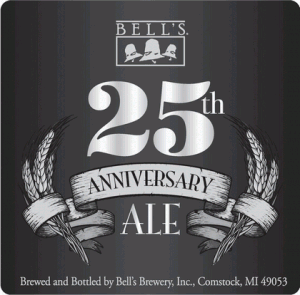 Information: Bottle – “We started in 1985 with a soup pot, a dream, and quite honestly a prayer. Thank God we made it! Please enjoy this special ale made with Michigan-grown barley malt and celebrate with us.”

Talk about a one-two punch of kick-assery, not only do I live a stone’s throw from the Bell’s brewery itself -which is a treasure, I have to tell you- but I also happen to enjoy my evenings as a certified ‘Clerk’ at a party store in which we stock as much awesome beers as spacially possible. All this having been said -and all bizarre spelling mishaps aside- let’s dive together head first into a very special review marking the 25th Anniversary of one of Michigan’s finest breweries.

The initial pour (into a proper pint glass, mind you) is heady and rich with a nice, bright amber body. The aroma is immediately unmistakable; full with bitter hops and a pure citrus rind note. It is, as I’ve noticed, a scent that I haven’t actually had the pleasure of experiencing before. I can find hints of coriander, a nutty back-up melody, and grassy tones as well. Interesting and quite refreshing already! Now we drink!

The flavor has a definite IPA quality with it’s grapefruit edge and nicely bitter bite, but there is definitely a whole lot more going on here. The barely malts are instantly detectable adding their nutty sweetness and rich, creamy body to the all round flavor making it more like a slice of some kind of Southern pie! Pecan, perhaps? There is really an interesting dessert aura about this beer that I never expected from the initial smells, but it certainly turned out to be a wonderful surprise. All in all, it’s a bit like a stout without the heaviness and deep hues. Really delicious. Another hit for Bell’s indeed.